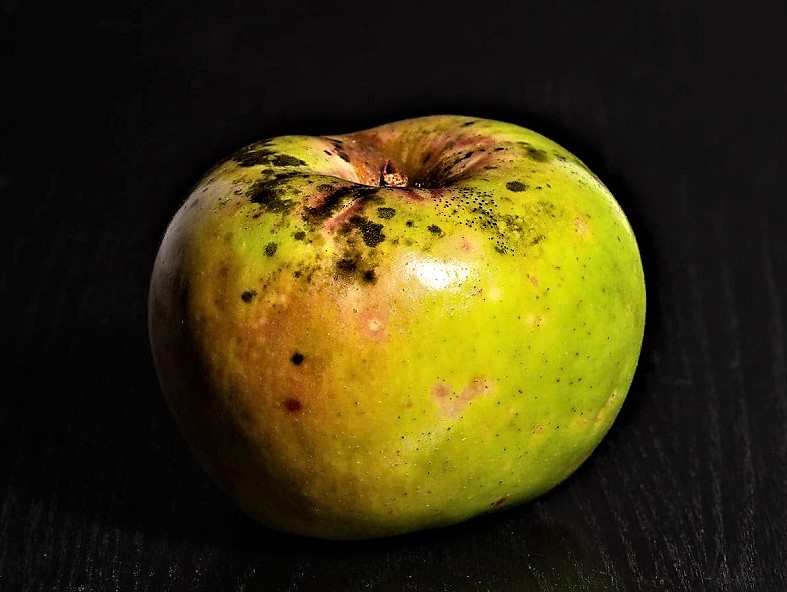 When we were young, my husband and I bought an established 500 tree apple orchard near the Blue Ridge Parkway in Patrick County, Virginia.  It surprised us that our 1st harvest brought locals to our land to buy our sort of ugly Pippins. Our "flat-lander" customers seldom took a 2nd look at our weird pippins. Those orchard neighbors spoke lovingly of saving their pippins until Springtime to cook & eat.  We saved ours until Spring & instantly understood the complexity & allure of those pippins.

"The apple is, perhaps, the most democratic of fruits. Dependable and solid, a perfect blend of sweet and tart, equally tasty whether eaten raw, baked into a cake or pressed into cider.  Of course, nothing could be more American than apple pie, but a robust apple from Virginia called the Albemarle pippin once made even a young Queen Victoria swoon.

"If there is one piece of fruit that seems to have captured the fancies of statesmen, farmers, chefs, and, yes, royalty, since Colonial times, it’s the Albemarle pippin, a green apple with russet shoulders that began its journey in — where else? — the Big Apple.

"Originally grown in the Elmhurst area of Queens, the Newtown pippin was already a favorite in the American colonies, a citrusy green apple that improved in flavor while being stored during the long winter.

"But when cuttings were taken to central Virginia in the 1750s by Thomas Jefferson’s guardian, Thomas Walker, the Southern climate seemed to really agree with the Northern apple. A new and improved version of the Newtown pippin emerged, eventually named for its home in Albemarle County, Va.

“It took on a different appearance and taste,” says Diane Burns, a horticulturist at Pippin Hill Farm & Vineyards just outside Charlottesville. “Our soil is different from New York, along with the climate and elevation. The Newtown was already a good apple, but growing it in the Piedmont region made it even better.”

"Make no mistake, the Albemarle and the Newton pippin are basically regional versions of the same apple (also known as the yellow pippin or yellow Newtown), but it was a canny Virginia statesman, Andrew Stevenson, who handily boosted his home state’s economy by presenting a teenage Queen Victoria with a gift of the Albemarle variety from his family’s orchards. According to “Old Southern Apples” by Creighton Lee Calhoun, Victoria became so besotted with the fruit that she went as far as to lift the high tariff on the Albemarle pippin so that her subjects could munch on them to their heart’s delight — if they could afford them. The Virginia apple eventually became so popular that it commanded triple the price of other apples for sale in England, becoming, arguably, the most coveted apple in the world. The tariff wasn’t reinstated for nearly a century...

"And if you’ve never heard of — or eaten — the Albemarle pippin, it may be primarily because of one factor: By modern standards of uniformity and perfection, it ain’t pretty. Often pockmarked and misshapen, many heirloom varieties have fallen out of favor over the past several decades, while more attractive and disease-resistant apples have captured the marketplace...

“Today’s apples are bred for perfection, but they are just sweet apples,” says Burns. “These older varieties may not be so sweet or look as nice, but they have a great flavor, a bit more tart and full-bodied. You have to look past the pockmarks on the skin.”

"When Burns started growing fresh produce for the kitchens at Pippin Hill Farm & Vineyards in 2016, she knew she wanted to cultivate the Albemarle pippin, establishing what she calls a “boutique orchard” with just a handful of trees. She became familiar with the variety while working several years earlier at Jefferson’s home, Monticello, where the apple has been cultivated since 1769.

"For Pippin Hill executive chef Ian Rynecki, who joined in 2017, it was a chance to really explore the flavor profile of an apple that had caught his eye in the past.  “I had seen it maybe three times at farmers markets in New York,” says Rynecki. “From a culinary standpoint, it primarily lends itself to being a dessert apple. It has firm flesh, a lot of complexity to it, not just a sweet or tart apple...It’s funny to describe an apple as having a finish to it, as you would describe a wine,” says Rynecki, “but some of these heirloom varieties really reward you with their complexity.”

"James Beard Award-winning author Rowan Jacobsen’s exhaustive compendium, “Apples of Uncommon Character ,” refers to the Albemarle and Newtown pippin as “somewhat sugary and very acid, with a bracing, lemony flavor and a green-tea note from the skin.  Like a fine wine, it needs to breathe for a while before its aromas open up.”

"Key is allowing the apple to cure. “When you first harvest the Albemarle pippin in the fall, it’s not a wonderful flavor,” says Peggy Cornett, curator of plants at Monticello, “but if you keep it in a storage cellar or your refrigerator, it has a marvelous flavor by late winter and spring.”
at 5:00 AM