"Archaeologists at Historic Jamestowne found 10 dark planting furrows extending eastward from the original 1607 James Fort and dating to the first months of the settlement.

About a foot and a half wide and spaced evenly apart, the shallow features are the earliest evidence of English planting found in the New World. This work was described by John Smith in 1607 as:
"What toile wee had, with so smal a power to guard our workmen adaies, watch al night, resist our enimies and effect our businesse, to relade the ships, cut downe trees, and prepare the ground to plant our corne, etc." 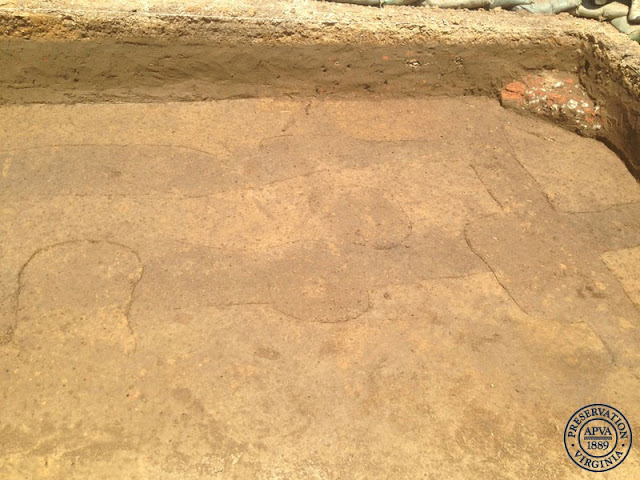 Smith's account and this newly-discovered archaeological evidence both reinforce the specific instructions the Virginia Company gave the first settlers: to divide the group into thirds, with one third building a fort and others to "prepar[e] your ground and sow . . . your corn and roots; . . ."

Archaeologists confirmed the early nature of the furrows by finding that a 1608 wall line trench cut through the furrow marks, demonstrating that the planting rows predate the 1608 palisade. The furrows discovered this summer seem to match furrows uncovered by the Jamestown Rediscovery team about a decade ago just outside the southeast bulwark of James Fort. All the furrows together would amount to about half an acre of planting.

"This isn't the way they would have planted if they were in England with draft animals. This is the beginnings of New World agriculture, taking a hoe and digging a ditch," said Jamestown Rediscovery senior staff archaeologist David Givens.

There is some question what the English meant when they wrote that they planted "corn." Bly Straube, senior archaeological curator for the Jamestown Rediscovery Project, said "corn" to the English meant grain (wheat, barley, oats), and they had brought seeds of English grains with them to plant because the Virginia Company was curious as to how well English crops would do in the New World.

And the garden area may have included some tropical plants. Colonist Gabriel Archer (who was back in England in 1608) talked about how they brought pineapple from the West Indies, which was "set in our mould, which fostereth it and keeps it green," according to Straube. Archer said other West Indian plants also did well: orange, cotton trees, potatoes, pumpkins and melons. "All our garden seeds that were carefully sown prosper well, yet we only digged the ground half a ____ deep, threw in the seeds at random carelessly, and scarce rak'd it."

Hand-dug furrow agriculture was practiced in Virginia for centuries after 1607. Forensic evidence from later colonists shows the physical impact of this style of farming. The Smithsonian's National Museum of Natural History said in its "Written in Bone" exhibit about colonists in the Chesapeake region that "Lower back strain was constant in hoeing soil to make hills for planting corn and tobacco, or weeding between the hills until the corn or tobacco grew tall enough to shade out weeds." Such lifelong work led to herniated disks and vertebral stress fractures in the bones studied for the exhibit.

"This is the beginning of Southern agriculture. Agriculture -- the growing of tobacco -- saved the colony and set the economic pattern for the South for centuries," Givens said.

"It's remarkable that these furrows have survived, probably because they were in the churchyard and protected," he said. "There is no later plowing here. It's completely intact."

This report is from Historic Jamestowne click here.  Historic Jamestowne is the site of the first permanent English settlement in America. The site is jointly administered by the National Park Service and The Colonial Williamsburg Foundation on behalf of Preservation Virginia.  Excavations by the Jamestown Rediscovery Archaeological Project began at Jamestown Island, Virginia, the first permanent English colony in North America in 1994 with the hopes of finding some evidence of the original 1607 James Fort, for over two centuries thought lost to river shoreline erosion. Today, archaeologists have rediscovered much of the fortification and have recovered over a million artifacts that tell the true story of Jamestown.
at 4:00 AM