Landscape Design - The Labyrinth or Maze

During the 18th century in the British American colonies, in a garden or pleasure grounds, a labyrinth was a maze of walkways bordered by high hedges, usually intended to grow 8-12' high, to create an intricate & difficult path to the center, so confusing that a person may lose himself in it. The visitor might find himself again, but he might not.

At that point, the host, usually the garden labyrinth designer, would rescue his humbled guest. The mortal garden owner found an ingenious way to be totally in control & to garner all the power & the glory -- well, temporarily, at least.

Earlier medieval churchs had a different perspective on their labyrinths. They believed a person's journey through a labyrinth represented his or her passage through life towards spiritual redemption through immortal God's grace.

Labyrinths were mentioned in the books of classical antiquities that the colonial gentry were reading at the time. The Greek Herodotus & the Roman Pliny refered to labyrinths in Egyptain buildings. Both Chaucer & Shakespeare used labyrinth images in their tales. A tall hedge labyrinth of maze walkways ending at a summerhouse was a perfect place for secret lovers to rendezvous.

Samuel Pepys wrote in his 1666 diary, "Here were also great variety of other exotique plants, and several labyrinths." A 1740 Welsh history book Drych y Prif Oesoedd makes note of the curious custom shepherds had of cutting the turf in the form of a labyrinth. 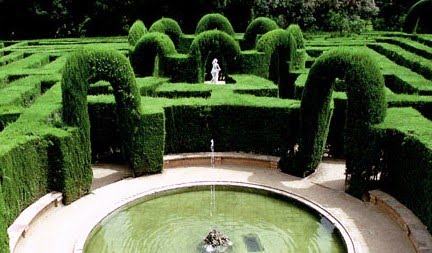 In France, garden labyrinths often were known as Houses of Daedalus after the mythical figure Daedalus who first constructed a labyrinth for King Minos of Crete, in which to hide the hungry Minotaur.

In 1707, Louis Liger & Francois Gentil wrote in Le Jardinier Solitaire, "A Labyrinth is commonly a Place cut into several Paths, which are renderd agreeable by the Hornbeam that parts them.

This fort of Knots we meet with in great Gardens; and the Labyrinths that are most esteem'd, are always those which are moft perplexed; such as that at Versailles... 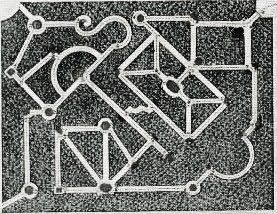 Labyrinth Design at the gardens at Versailles, France.
The Palissades of which this Work is compos'd, are Ten, Twelve, or Fifteen Foot high; some are not above Breast high but these are none of the finest.

The Paths which divide the Labyrinths ought always to be Gravel or raked, and the Hornbeam should be trimm'd with a Hook." 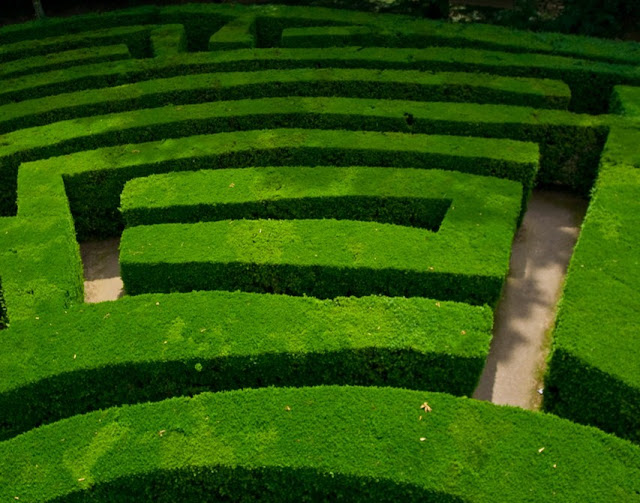 James Wheeler explained the garden labyrinth in the 1763 Botanist's and Gardener's New Dictionary..., "a winding, maze walk, between hedges, through a wood or wilderness. The chief aim is to make the walks so perplexed and intricate, that a person may lofe himself in them, and meet with as great a number of disappointments as possible. They are rarely to be met with, except in great and noble gardens, as Versailles, Hampton-court, &c."

Britain's oldest surviving hedge maze is at Hampton Court Palace, designed by George London & Henry Wise in 1690. Originally, in the middle were 2 trees pictured here with people sitting under them. The old hornbeam maze was eventually replaced with yew.

Henry Wise (1653-1738) was Queen Anne's master gardener & the last of the British 'Formalists', He was superintendant of the royal gardens at the 1701 re-creation of the King's Privy Garden for William III at Hampton Court. In partnership with George London, Wise is associated with the design of formal gardens at Longleat in Wiltshire, Studley Royal, Castle Howard and Newby Hall in Yorkshire and at Blenheim Palace in Oxfordshire and Chatsworth in Derbyshire.

"There are two ways of making them; the first is with Angle hedges : this method has been practiced in England: and these may, indeed, be best, where there is but a small spot of ground allowed for making them; but where there is ground enough, the double is most eligible.

"Those made with double hedges, with a considerable thickness of wood between them, are approved as much better than single ones: this is the manner of making them in France and other places; of all which that of Versailles is allowed to be the noblest of its kind in the world. 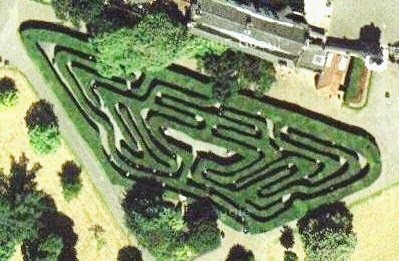 "It is an error to make them too narrow; for that makes it necessary to keep the hedges close clipt: but if, according to the foreign practice, they are made wider, they will not Have in need of it.

"The walks are made with gravel usually set with hornbeams: the palissades ought to be ten, twelve, or fourteen feet high: the hornbeam should be kept cut, and the walks rolled." 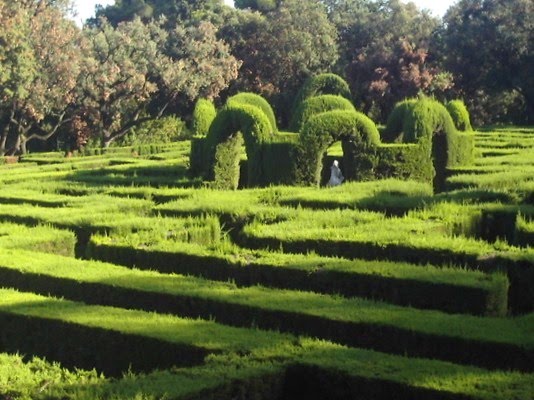 Bernard M'Mahon wrote his American Gardener's Calender in 1806. He wrote that "A Labyrinth, is a maze or sort of intricate wilderness plantation, abounding with hedges and walks, formed into many windings and turnings, leading to one common centre, extremely difficult to find out; designed in large pleasure-grounds by way of amusement.

"It is generally formed with hedges, commonly in double rows, leading in various intricate turnings, backward and forward, with intervening plantations, and gravel-walks alternately between hedge and hedge ; the great aim is to have the walk contrived in so many mazy, intricate windings, to and fro, that a person may have much difficulty in finding out the centre, by meeting with as many stops and disappointments as possible; for he must not cross, or break through the hedges; so that in a well contrived labyrinth, a stranger will often entirely loose himself, so as not to find his way to the centre, nor out again. 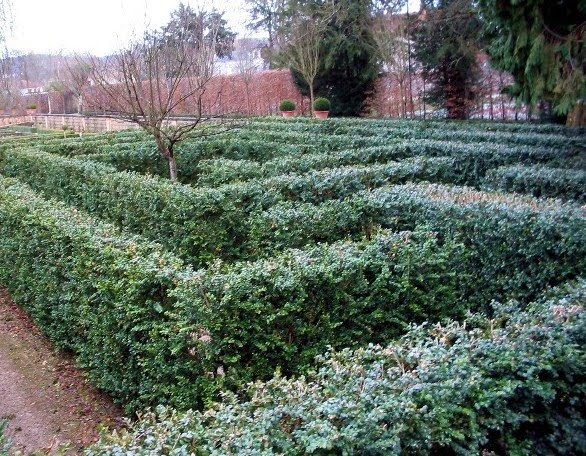 "As to plans of them, it is impossible to describe such, by words, any further than the above hints, and their contrivance must principally depend, on the ingenuity of the designer.

"But as to the hedges, walks, and trees; the hedges are usually made of hornbeam, beech, elm, or any other kind that can be kept neat by clipping. The walks should be five feet wide at least, laid with gravel, neatly rolled, and kept clean; and the trees and shrubs to form a thicket of wood between the hedges, may be of any hardy kinds of the deciduous tribe, interspersed with some ever-greens; and in the middle of the labyrinth should be a spacious open, ornamented with some rural seats and shady bowers, &c. 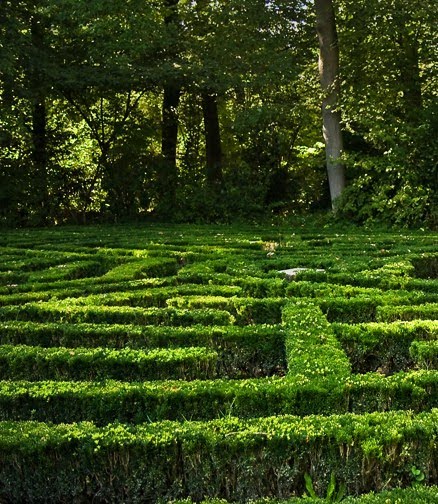 "Sometimes small labyrinths are formed with box-edgings, and borders for plants, with handsome narrow walks between, in imitation of the larger ones; which have a very pleasing and amusing effect in small gardens. "
Labyrinth Design at restored Governor's Palace in Williamsburg, Virginia.

In the British American colonies and early republic, labyrinths were mentioned by the middle of the 18th-century. A hedge labyrinth was restored at the Governor's Palace in Williamsburg, Virginia. 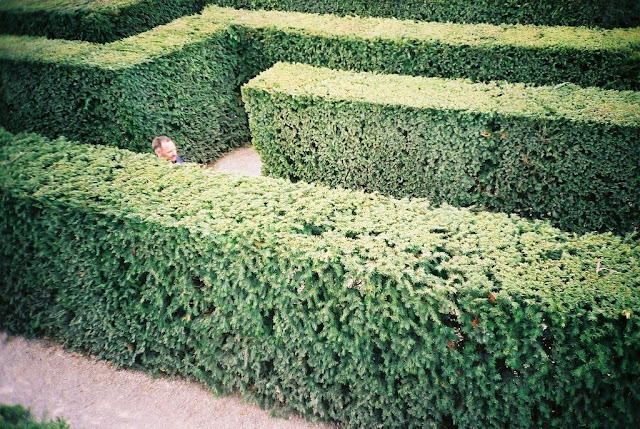 In 1762, Hannah Callender mentioned in her diary William Peters' Belmont near Philadelphia, Pennsylvania, "On the right you enter a labyrinth of hedge of low cedar and spruce. In the middle stands a statue of Apollo."

Manasseh Cutler noted in his 1787 journal visiting Gray's Gardens in Philadelphia, "Here is a curious labyrinth with numerous winding begun, and extends along the declivity of the hill toward the gardens, but has yet hardly received its form." 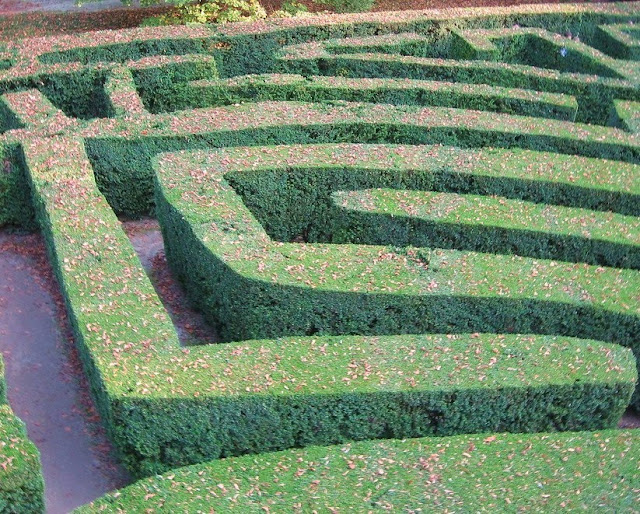 At Monticello in Virginia in 1804, Thomas Jefferson wrote, "The best way of forming the thicket will be to plant it in labyrinth spirally, putting the tallest plants in the centre and lowering gradation to the external termination, a temple or seat may be in the center then leaving space enough between the rows to walk." 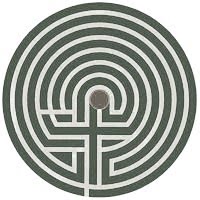 Design of Labyrinth at Harmony Society in Butler County, Pennsylvania.
Johann Georg Rapp (1757-1847) built his first Harmony Society in 1804 in Butler County, Pennsylvania. When John Melish visited a few years later, he reported, "From the warehouses we went to the Labyrinth, which is a most elegant flower-garden, with various hedge-rows, disposed in such a manner as to puzzle people to get into the little temple, emblematical of Harmony, in the middle. Mr. Rapp abruptly left us as we entered, and we soon observed him over the hedge-rows, taking his seat before the house. 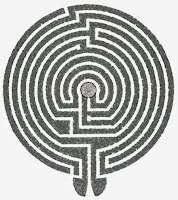 Design of Restored Labyrinth at Harmony Society in southern Indiana.

"I found my way with difficulty; but the doctor, whom I left on purpose, could not find it, and Mr. Rapp had to point it out to him. The garden and temple are emblematical. The Labyrinth represents the difficulty of arriving at Harmony. The temple is rough in the exterior, showing that, at a distance, it has no allurements; but it is smooth and beautiful within, to show the beauty of harmony when once attained."

By this time, the term labyrinth began to become an emblem encouraging reflection & contemplation. The term maze was often used to denote confusion and gave power to the owner, the person who created the garden maze & could rescue those lost in the intricacies of the plantings.

At some point in time, certainly not during the 18th & early 19th centuries in America, garden labyrinths became puzzles with one pathway leading from the entrance to the goal, but often by complex & winding of routes. And garden mazes became puzzles usually designed with choices in the pathway, some of which may lead to dead-ends.

Americans still enjoy labyrinths. Out in the country where we live, mazes are cut out of corn fields, and folks flock to them. One of my friends wrote of his corn maze adventure, "I loved it, because it was an intellectual challenge that physically swallowed you up. When you work a puzzle on paper, you are contesting the game from outside the playing field—as if you were an aloof scientist observing the rats in an experiment or a giant Gulliver towering over the Lilliputians. But when you walk into a maze, you are playing the game from the inside—you are the rat in the labyrinth." 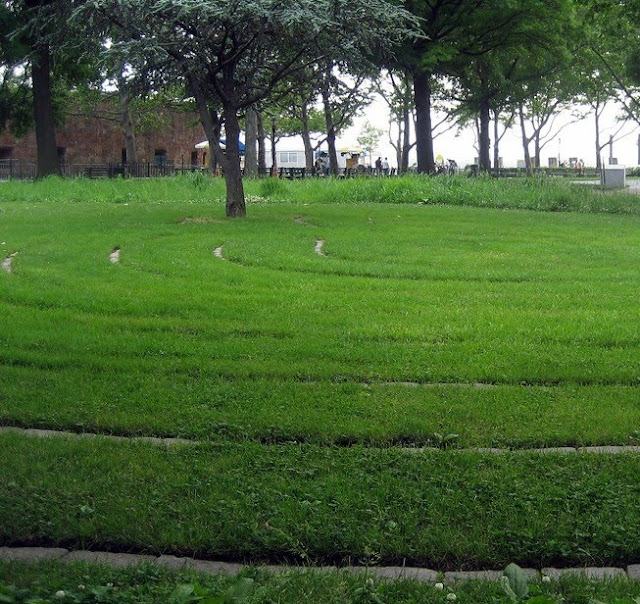 In New York City, a year after the World Trade Center tragedy, the memorial Battery Labyrinth was created to offer the public a way to reflect, honor, & heal. This low labyrinth encourages contemplation on a journey with a clear destination. Its goal is to create an internal balance generated by the rhythm of the walking and the mental state of no decision-making..

You may be interested in further reading on the subject:
Carpeggiani, Paolo. "Labyrinths in the Gardens of the Renaissance" in the History of Garden Design, ed. Monique Mosser & Georges Teyssot. London: Thames & Hudson, 1991.

Pizzoni, Filippo. The Garden - A History in Landscape and Art. London: Aurum Press, 1999.

Reed Doob, Penelope. The Idea of the Labyrinth from Classical Antiquity through the Middle Ages. Ithaca, NY: Cornell University Press, 1990.