An urn is a marble, stone, earthenware, or metal vessel or vase of a round or ovoid form standing on a rectangular or circular base. Traditional Greek & Roman forms of ornamental garden urns are the tazza, a cup-shaped form whose width exceeds it height; & the campana, or upturned bell-shaped form.

Because early urns also were used to hold ashes of the departed, urns are usually solemn ornaments of reverence, taste, & refinement. Cremation was prevalent among the Greeks & during the Roman Empire, 27 B.C. to 395 A.D., it was widely practiced. The custom called for cremated remains to be stored in urns, which were sometimes elaborate & often placed within detached columbarium-like buildings in Roman & Greek gardens. 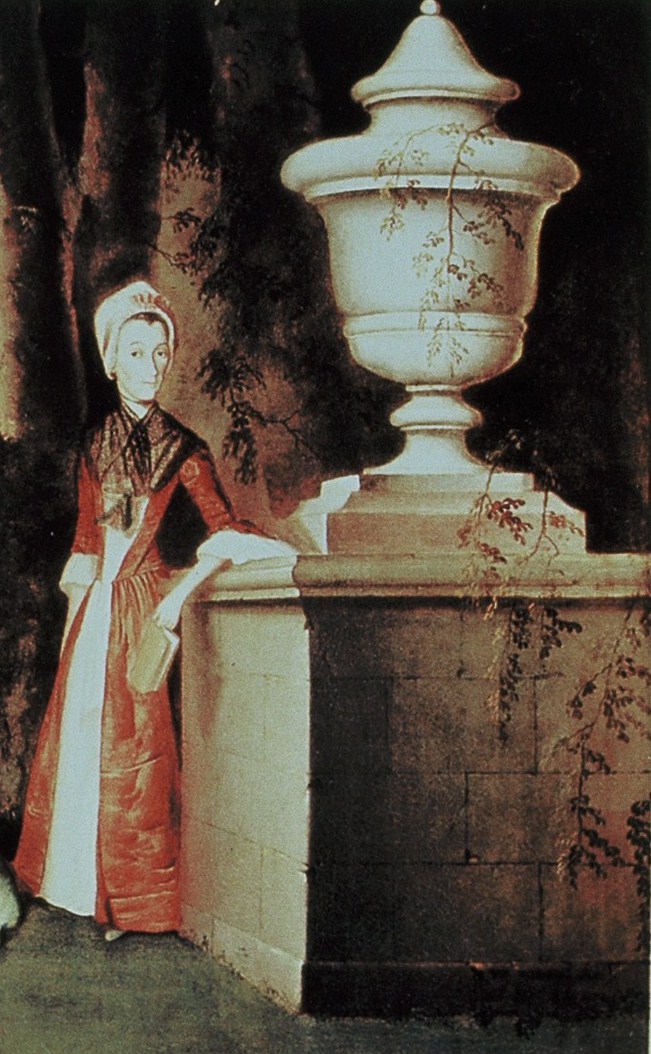 Christians considered cremation pagan, & Jews preferred traditional sepulcher entombment. By 400 A.D., as a result of Constantine's Christianization of the Roman Empire, earth burial replaced cremation, except for rare instances of plague or war, for the next 1,500 years throughout Europe & its colonies.

In fact, it was news in the colonies, when urns filled with charred remains were found in Ireland in 1733. The South Carolina Gazette reported, "Dublin, Octob . 31. Last Week as some Workmen were digging up Stones for the Buildings at Power's Court, in turning over some great Rocks, they found several great curious Pieces of Antiquity, being 3 old Urns of a very uncommon Make, deposited together, and filled with Ashes, supposed to belong to some of the Danes, or old Roman People, who formerly visited this Island." 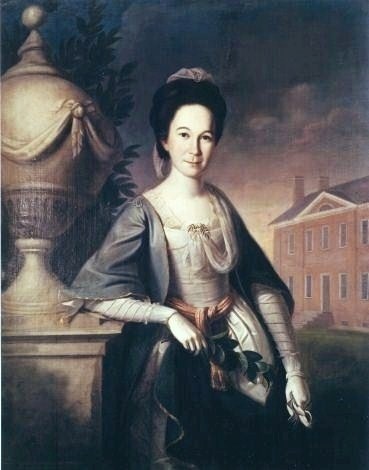 In 1737, the South Carolina Gazette also reported on an extract of a letter from England, "There was lately discover'd on Mr. Campton's Estate, at Coddlestock, near Oundle in Northhamtershire a beautiful Roman Pavement 20 Foot square and very little defac'd by Time; near it were found Bones, Ashes, and Pieces of Urns , an Indication that the Body of some noted Heathen had been buryed there."

Thirty years later in 1767, the Virginia Gazette reported similar findings "from Perth, that as some labourers were sinking a well near Abernethy, in Scotland, they discovered two urns , containing several pieces of antique silver coin, and from their inscriptions it appeared that that place had formerly been a Roman station." Later in the same year, they noted that in "Glasgow that some fishermen lately drug up, in the island of ST. Kilda, two antique urns , containing a quantity of Danish silver coin, which by the inscription appears to have lain there upwards of 1800 years." 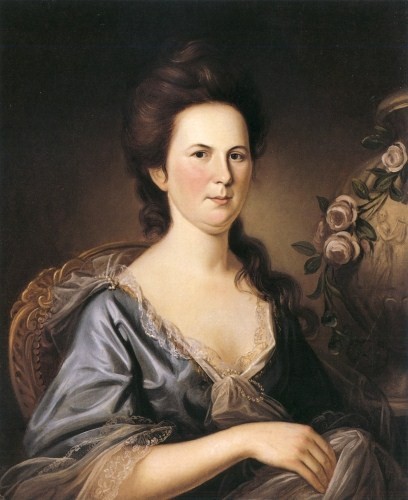 
The South Carolina Gazette printed a pastoral elegy to a local gentleman in 1757, which not only referred to urns but also to the crop he must have grown, rice. "Port-Royal plains! let never balmy dew, Pouring from chrystal sluices, water you, Nor, from their silver urns , the Pleiad 's poar The fruitful rain and soft prolific show'r. May blights and mildews on your fields remain. And wormy insects gnaw your ricy grain: For in your neld's, entomb'd, does Damon lie. Port-Royal gods! Why did my Damon die?"

Urn-shapped tea ware, usually silver-plated or japanned & often called Roman urns, appeared in the colonies by the 1760s. In October of 1764, the Pennsylvania Gazette was advertising classical tablewar, including urns, "Just imported in the Philadelphia Packet, Captain Budden, and Sparks, from London, and to be sold on the lowest and best terms...silver pillared and fluted candlesticks of the Corinthian order...chased and plain ewers, urns and milkpots." 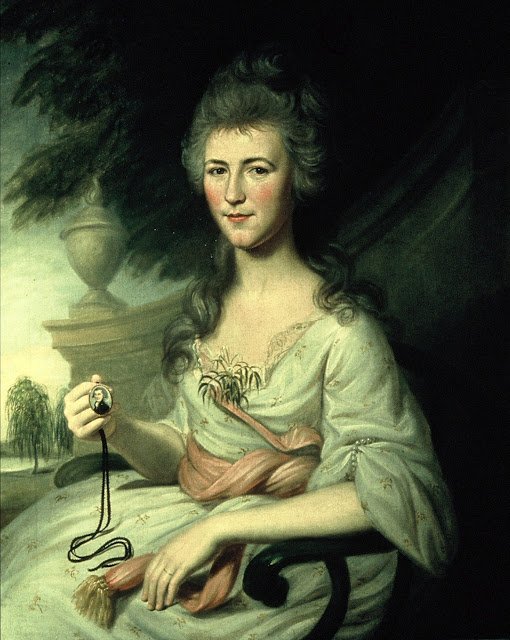 By 1769, Jacob Hanke placed an ad in the Pennsylvania Gazette to announce his architectural ornaments, "THE subscriber takes this method of informing the public, that he has set up the Turnerbusiness (which he formerly followed in this city) and makes and sells...columns, urns , newel posts, bannisters, and all kinds of Turnerwork, at his shop, at the Sign of the Spinning Wheel...in Spruce street, near the Drawbridge." 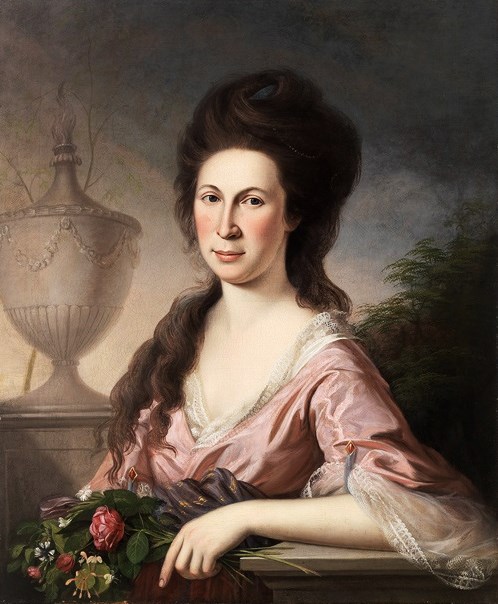 Mantle ornaments in the shape of urns appeared in 1773, when Nicholas Langfore, a bookseller in Charlestown advertised in the local newspaper, " a Consignment of a Set of Ornaments for a Chimney Piece, confisting of seven Petrifactions of Water from Derhyshire, resembling Jasper, in the Form of Altars, Urns , Vasses, &c. most elegantly mounted in Or Moule, which are to be sold at a small Advances, on the first Cost."

An intriguing carved walking cane went missing in Charleston in 1774, "With a golden Head, engraved with Urns and Festoons."

Few garden urns are mentioned in early American documents, but painters of the period occasionally depicted urns in their portraits. Open urns are often referred to as vases by colonial observers. Maryland-born artist Charles Willson Peale (1741-1827) was particularly partial to painting urns as props in his portraits.

Hannah Callender visited William Peters' garden at Belmont in 1762, near Philadelphia, Pennsylvania. She noted, "On the right you enter a labyrinth of hedge of low cedar and spruce. In the middle stands a statue of Apollo. In the garden are statues of Diana, Fame and Mercury with urns."

The 1778 South Carolina Gazette advertised the property of Thomas Loughton Smith for sale after his death, noting, "there are a few elegant urns and statues in the garden which will be sold with the premises."

Early colleges in America often had walled grounds. My favorite description of one of these walls was by Moreau de St. Mery (1750-1819), when he visited Princeton, New Jersey in the 1790s. In a 1764 print, Nassau Hall is depicted with a wall & urns. He wrote, "Before it is a huge front yard set off from the street by a brick wall, and at intervals along the wall are pilasters supporting wooden urns painted gray."
Detail of Nassau Hall with Wooden Campana Urns on the Wall, Princeton, New Jersey, in 1764.

After Thomas Jefferson's death, a Monticello visitor noted, "cattle wandering among Italian mouldering vases." The Governor's Palace in Williamsburg was recorded as having "lead vases" in its gardens. A description of Eliza Hasket Derby's garden in Salem, Massachusettes, was said to have "large marble vases" which gave it a finished appearance.
Closed or Lidded Campana Urns at Falling Garden in Annapolis, Maryland at the William Paca (1740-1799) House. These urns have recently been replaced by large pineapple or artichoke (Cynara) finials on classical pedestals.
Tazza Urn on a tall pedestal at Belvedere, Home of Governor John Eager Howard (1752-1827), Baltimore, Maryland. Painting by Augustus Weidenbach c 1858. 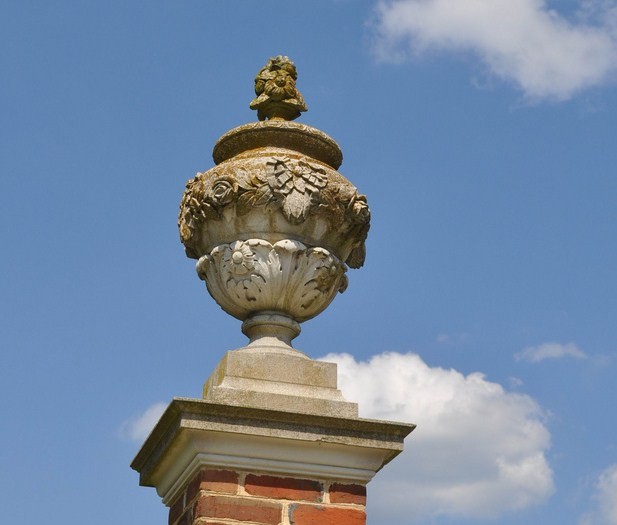 In the Early Republic & well into the 19C, depictions of urns in the landscape were used as memorial objects in the work being produced by American girls in private female academies, where the young women learned decorative painting & sewing as well as reading & writing. Outdoor memorial urns were usually depicted with a nearby weeping willow tree.

By the time of George Washington's death in late 1779, the weeping willow tree was firmly established as a solemn memorial; as the Pennsylvania Gazette reported on Mount Vernon high above the Potomac River in Virginia, "Now the flocks, the shades, the walks, the weeping willows, the mourning bird of night, the pensive streams, and the sad murmurs of the broad Potomac, which in pride rolled its waves before the mansion of its great improver, call, again and again, the sad story which has filled the world with sorrow, that the illustrious Chief of Mount Vernon is no more." 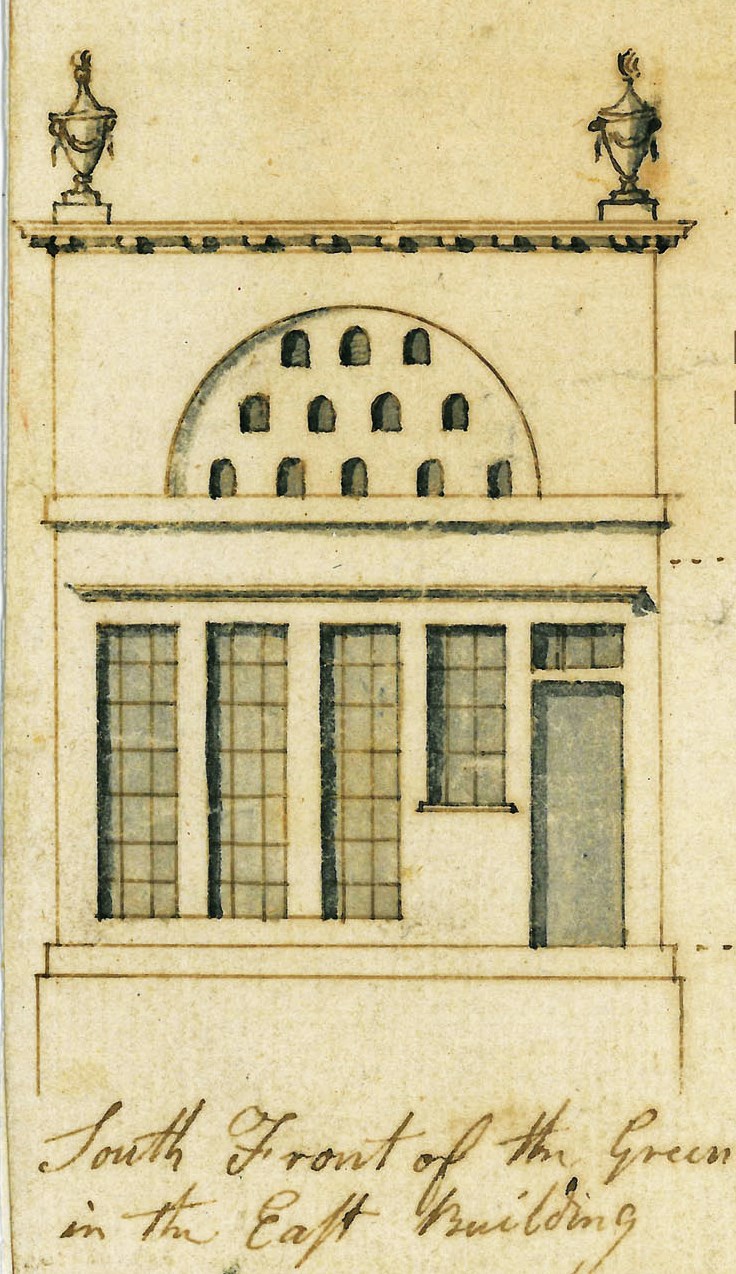 The John Peirce House in Portsmouth, New Hampshire, built in 1799, featured a lantern tower crowned by urns. The Samuel McIntire, Peirce-Nichols House in Salem, Massachusettes, begun in 1782, has urns punctuating its fence. In 1795, he recorded in his journal paying for "Carving 4 Vases for the Summer House." The Elias Hasket Derby House, also in Salem, built in the late 1790s, had a roof balustrade with pilasters supporting 6 urns.

Urns remained in the landscape designs of the Early Republic.  Urns & weeping willow trees dotted 19C cemeteries, but it would be many decades before cremation was once again a commonly accepted form of burial in America. 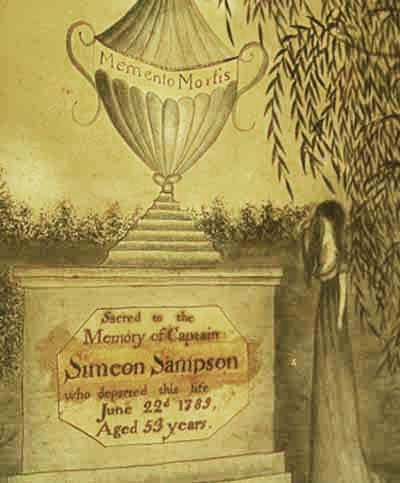 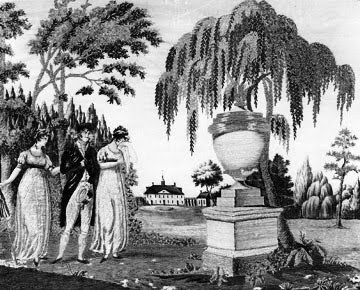 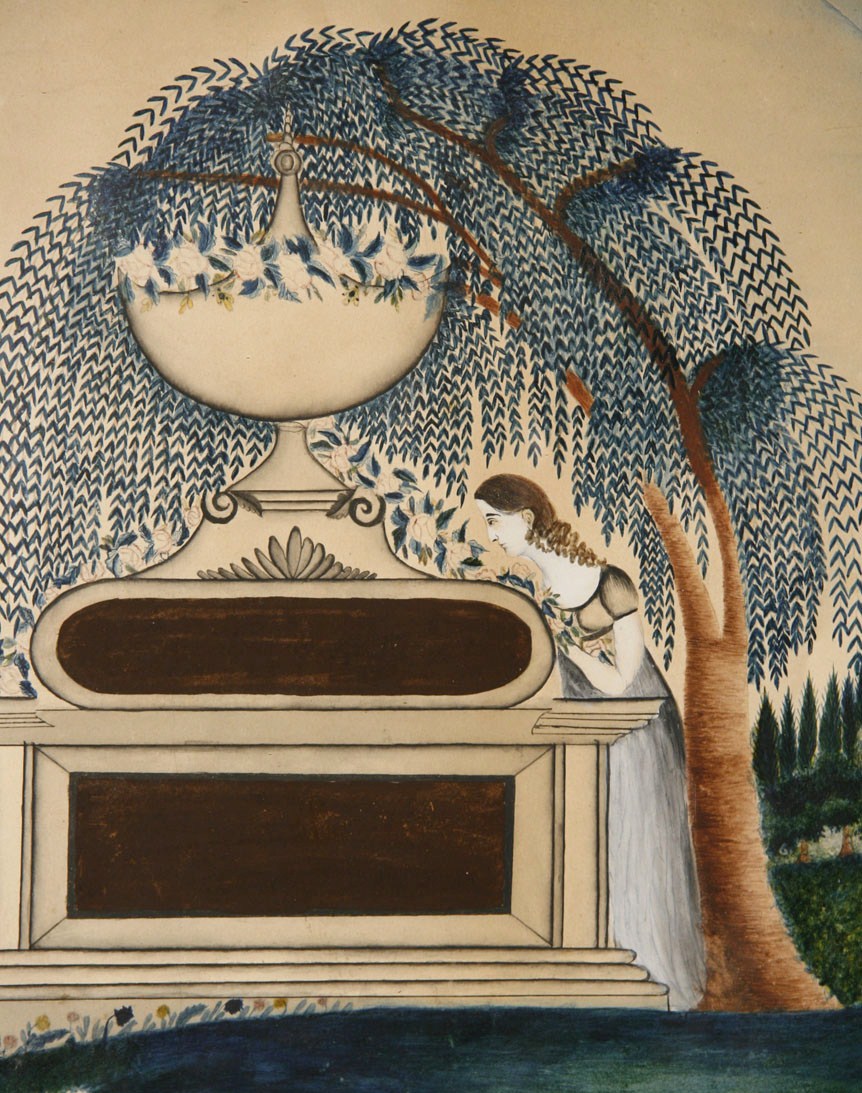 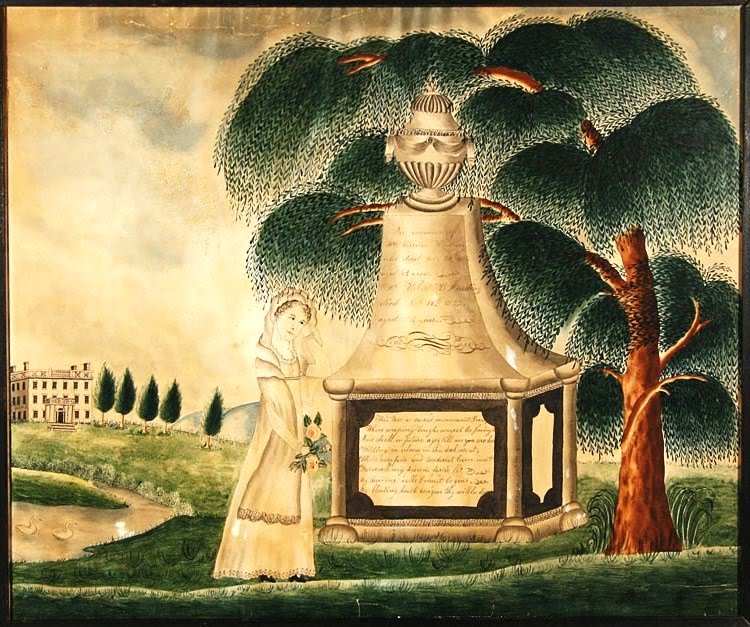 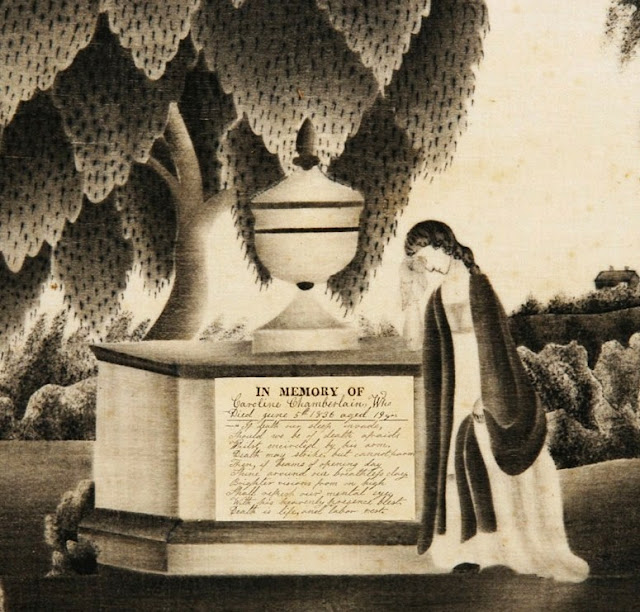 For more about schoolgirl needlework, see Girlhood Embroidery, American Samplers & Pictorial Needlework by Betty Ring (New York: Alfred A. Knopf, 1993) and The "Ornamental Branches," Needlework and Arts from the Lititz Moravian Girls' School Between 1800 and 1865 by Patricia T. Herr (Lancaster, Pennsylvania: The Heritage Center Museum of Lancaster County, 1996).
at 4:00 AM