Work Yards -Tan Yard
Tanning was the process of converting skins of cows, goats, calves, sheep, hogs, sheep, and dogs into raw hides and eventually leather. Tanning was an Early American industry often located in the landscape on far edge of a village, because the smell of decaying animals and animal manure was strong in a good wind. The Massachusetts General Court, in 1640, recognized the importance of the industry, and passed a law punishing those who slaughtered cattle and neglected to save the hides to have them tanned.  By 1692, Connecticut tanners had to prove their tanning methods in county court to receive a license to practice tanning. 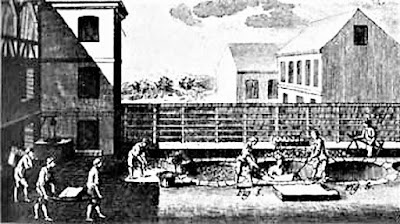 Layering animal hides in pits between sheets of tanbark was an integral part of the tannin process. Encyclopedia of Sciences, Arts and Trades, Diderot 1769

In 1641, George Burden and James Everell were granted permission by the selectmen of the city of Boston "to sink a pit to water their leather" located near a millpond. However, if the odor was too annoying to the town folk, the tanners would have to fill up their vat.
br /> By 1653, Coenraet Ten Eyck, a shoemaker and tanner set up his tan pits set up in marshy swamp known as the "Swamp" located on the west side of Broad Street above Beaver Street in New Amsterdam. Another shoemaker and tanner, Abel Hardenbrook built his tan pits nearby in 1661. But the tanners had to fill up their vats and move elsewhere in 1676. Governor Edmund Andros (1637-1714) was the governor of the Dominion of New England during most of its 3-year existence. In 1676, he appointed 2 tanners for New York City with the Bolting Act of 1676 which declared, "that no butcher be permitted to be currier, or shoemaker, or tanner; nor shall any tanner be either currier, shoemaker, or butcher, it being consonant to the laws of England."

The demand for leather was great in Early America. Leather was used for buckskin britches; aprons made for blacksmiths; tops of carriages, saddles, and harnesses; shoes, boots, gloves, caps; and shot pouches for flintlock ammunition. 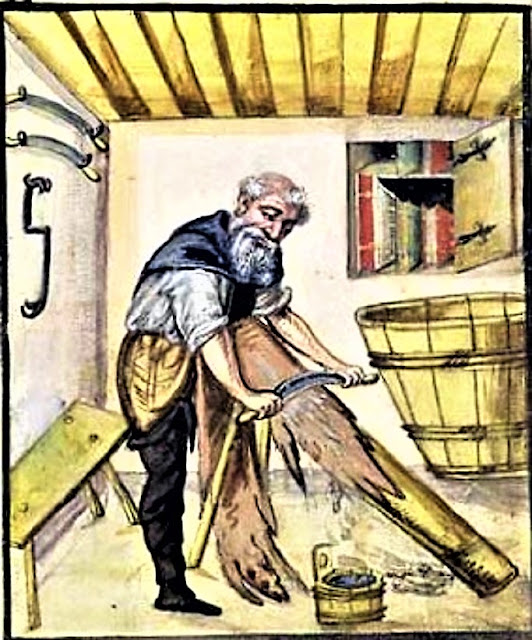 
One edition of the 1732 South Carolina Gazette noted a "tanyard" for sale in Dorcester. In 1733, a tan yard in Delaware appeared for sale in the Pennsylvania Gazette, "Sold or Let, A Dwelling House, Tan House and Tan Yard, in the Town of New Castle."


The South Carolina Gazette offered for sale in 1737, "a fine Tan yard."In 1748, the same newspaper offered an estate for sale consisting of, "Field Slaves, House Wenches, several good, shoe-makers and Tanners, with a Tan-yard, a parcel of Bark, Oyl, and a large Quantity of Hides."

Tanners needed a supply of skins; nearby trees for tanbark to make tannin; nearby ponds, creeks, rivers, and ocean coastlines. Tanneries used a great deal of water to wash and clean the animal hides. The tanning agent was different for parts of America - hemlock bark usually was used in the north and oak bark commonly was used in the middle and southern states.

Fur trader George Croghan, in Pennsboro, Pennsylvania in 1749, had a cluster of buildings along the Conondoguinit Creek. One of the buildings was a shop for tanning furs and another shop for storing the furs, until a wagon load could be shipped to the hatters and feltmakers of Philadelphia. A deed found 8 years after Croghan left Pennsylvania mentioned "houses, barns, stables, outhouses, edifices, buildings, tanyards, tan vatts, lime pitts, garden and other improvements."

Another ad in the South-Carolina Gazette on June 10, 1751, offered, "One tract of land, about 30 acres, in St. Andrew's-town at Ashley-Ferry, with a good dwelling-house, out-houses and garden, hath been a tan yard,and stands very convenient for that and a shoemaker."

In Pennsylvania near Eastown, Chester County a large was owned by Captain Isaac Wayne who was "a man of great industry and enterprise." It was an extensive tannery which produced considerable profit for a number of years. Upon Isaac's death in 1774, his son Anthony Wayne. the Revolutionary General, ran the business. 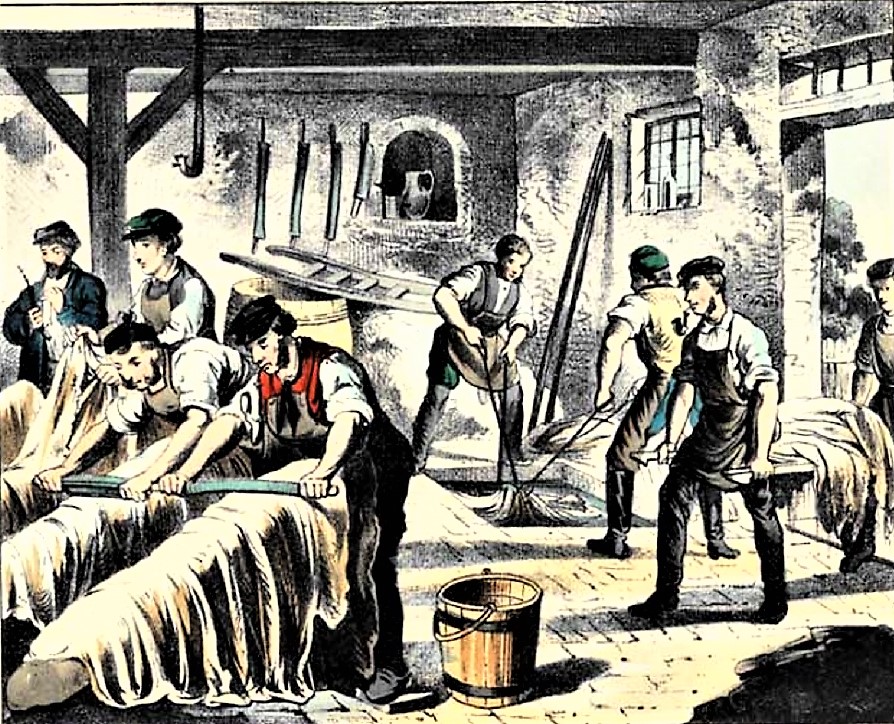 One New England tanner kept a journal for 65 years. Farmer Samuel Lane 1718-1806 of Stratham, N.H. began tanning at the age of 9, when he learned shoemaking from his father. On his farm, he grew "Corn, Wheat, Rye Grass, Hay, Wool, flax, Cider, apples, Pumpkins, Potatoes, Cabbages, turnips, Carrots, Beets peaches and other fruits." He listed his livestock as "Cattle, Sheep, Swine & other Creatures." And he liked to drink Milk, "Tea...Rum, Wine, & Gin."
b>
June 16, 1741. My House was Raised. I Bro't Some Boards and Nails from Hampton wh I had Bo't there, and Clam Shells for Lime, Shingles &c to help build my House withal.

1741- I was pritty near out of Debt; but then I had worked up my Lether, and was pretty bare on't for Stock; but I work'd Some Lether for other People; & Some I Bo't &c. that I got along as well as I could. - and having taken some Hides this Winter, I wanted a Tanyard (Note. I have to tan this year 7 Hides which I hung up in my Chamber having no Barn) and last fall having made me a mean Water Pitt with Slabbs; I dare not put my hides in Soak Early, lest I should not get my Pitts ready timely for Liming: But the 8th of may 1742 I finished putting Down 2 Tanpits: and having no Bark-Mill, I carried my Bark that year, to Mr Jewets to grind, and hired his Mill and Horse to grind it, which is Costly.

June 1. 1742 Being out of Lether this Summer, I was obliged to take out my new Lether as Soon as possible this fall 1742 a little undertand.

Dec 6. 1742 Moved into my New Shop where I and my Wife lived Chiefly this Winter, to Save Wood. Note. this Shop Stood Against the West End of my House, at a Chimney of my House. Note. this Winter I having no Barn kept my Cow in my Bark-House.

Oct 3. 1751 about these years I measure abundance of Land. This year I Bo't a Right in Barnstead of my Br Wm. Note. Many people Several years past run up the price of Hides to 2s pr lb & Some more: after which Lether fell, and their Stock after it was tan't would not fetch hardly so much as they gave for the Hides.