Tracing William Byrd II's gardener "Tom" in the records of Westover & Williamsburg, seems to point to Thomas Creas (c 1662-1757) as one of the earliest professional gardeners in Virginia. 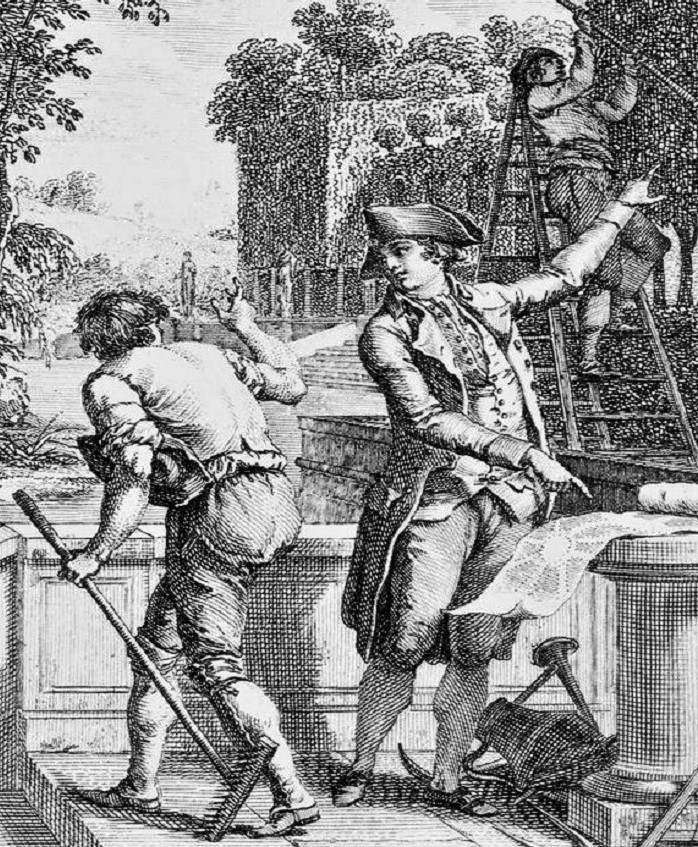 In Virginia early in the 18C, a succession of professional gardeners, who were not serving under an indenture, worked at institutions of the royal government in Williamsburg, including the Governor’s Palace & the College of William & Mary. Some of these professional gardeners held pristine credentials. James Road, an assistant to George London, Royal Gardener to King William & Queen Mary, was sent to Virginia in 1694, to collect plants for shipment back to Hampton Court Palace. He also probably to laid out the earliest gardens at the new college in Williamsburg. London had served as a gardener at Versailles & had traveled to Holland to study their smaller flower gardens, as well.

It is possible that James Road's supervising gardener George London (1681-1714) actually drew up the plans for the gardens at the College of William & Mary. Virginia planter John Walker wrote to John Evelyn in 1694. He received a reply to his particular query in May of 1694, in which Eveyln wrote, "Mr. London (his Majs Gardner here) who has an ingenious Servant of his, in Virginia, not unknown I presume to you by this time; being sent thither on purpose to make & plant the Garden, designed for the new Colledge, newly built in yr Country." The servant was London's assistant at Hampton Court, James Road.

The College, which was formally established by Royal Charter in 1693, began as a 330-acre tract of land purchased from Col. Thomas Ballard. William & Mary's 1st chancellor was Henry Compton, bishop of London. He was a serious gardener & horticulturalist who helped train George London to become a gardener.

Upon James Road's return to London, he was followed by gardener Richard Hickman. Soon after Hickman's appointment, the records indicate that Thomas Creas or Crease (c 1662-1757) was paid to assist Hickman in getting the gardens in order. After that, only Crease's name was associated with the ongoing management of the gardens at the Governor’s Palace for an unusually long tenure, from 1726, until he died in 1756.

It is unclear whether Creas was born, & perhaps trained, in the England. Some report that Thomas Creas was the head gardener at the Governor's Palace during the administration of Alexander Sportswood who served from 1710-1722. Others speculate that Creas came over from England with Governor Hugh Drysdale in 1722. Drysdale was the 1st Governor to occupy the new Governor's Palace in Williamsburg, from 1722-1726.

Others suggest that Crease may have begun his gardening work at Westover, the home of William Byrd II. Byrd calls his gardener Tom in his early journals & refers to a gardener "Tom Cross" in 1720. The same "Tom Cross" carried at least one letter from Byrd's Williamsburg brother-in-law John Custis during one of his visits to Westover.  Byrd, Custis, & Tom Cross/Creas were all accomplished gardeners.

Two years before his appearance in the Governor's Palace records, in 1724, Creas was identified as a "gardener of Williamsburg, married & owning a half acre lot." His house was on the land now supporting the "Taliaferro-Cole" house.  The earliest record relating to this property appears in a deed of trust, December 15, 1724, in which deed the lot number, 352, is noted & the owner's name, Thomas Creas:
December 15, 1724. Creas, Thomas - Gardener
Mary, his wife
to
Keith, William
Ferguson, Patrick
Consideration: 5 shillings All that messuage or dwelling house wherein the said Thomas Creas, & Mary, his said wife, now live & all that lot or half acre of land described in the plot of the said city by the figures 352, situate, lying & being in the city of Williamsburg, & all kitchens, stables thereto belonging. (York County Records, Deeds, Bonds, III, p. 439.) The above deed of trust was acknowledged on January 18, 1724/5.

In a lease given by John Custis to James Spiers, joyner & cabinetmaker, on October 26, 1744, a lot is described as "one lot of ground, with the houses & garden thereunto belonging, it being the house next to Thomas Craze's..."

According to York County, Virginia, records Creas married the widow of Gabriel Maupin, Marie Hersent, in 1724. Gabriel Maupin, his wife Marie, & family had sailed to the Huguenot settlement at Manakintown, in Virginia, in 1699-1700, after passing through the Spittalsfield (now Bethnell Green) "suburb" of London in the late 1690s.

Creas began to be "paid for his Service & labourerers in assisting in putting in order the Gardens belonging to the Governor's house" in 1726. He also was "Gardener to the College, in Williamsburg."

In addition to operating a tavern in Williamsburg, Thomas Creas supplemented his income by selling plants. In January 1737/38, he placed an ad in the Virginia Gazette (Virginia Gazette, Parks, ed.), "Gentlemen & others, may be supply'd with good Garden Pease, Beans & several other sorts Flower Roots; likewise Trees of several sorts & sizes, fit to plant, as ornaments in Gentlemen's gardens...Thomas Crease--Gardener to the College in Williamsburg."

On May 9, 1739, Crease placed another ad in the Virginia Gazette, May 4, 1739, "Notice is hereby given, That the Subscriber, Now living in Williamsburg, designs to leave this Colony, in order to go to Great-Britain ——. It is therefore desired of all Persons who are indebted to him, to come to his Shop, or to the House of Mr. Thomas Crase, in Williamsburg, & pay their just Debts Hugh Orr"