I love this blog posting by Mike Rendell about Battly Langley who wrote of English gardens in the 1st half of the 18C.  In fact, his entire blog, Georgian Gentleman, is fascinating!  Batty Langley's books often appeared in colonial British American libraries in the 18C.
Batty Langley, print made by J. Carwitham, 1741

"Many know of Capability Brown, some know of Humphry Repton, but one name largely overlooked is Batty Langley. Batty was baptised at Twickenham on 14th September 1696, the son of Daniel & Elizabeth Langley. His father was a jobbing gardener who seems to have been working for a David Batty, so the name may have been given to the baby in tribute to this patron. Batty Langley grew up in his father’s footsteps, keen on gardening but determined to spread his wings rather than pottering around with a spade & pruning knife.

"At the age of 23 Batty married, but his wife Anne died after producing 4 children from 7 years of marriage. He remarried & went on to sire another 10 children, to whom he bequeathed such fanciful names as Euclid, Vitruvius & Archimedes…
New Principles of Gardening, or, the laying out and planting parterres, groves, wildernesses, labyrinths, avenues, parks, c. London A. Bettesworth and J. Batley, 1728.

"Batty Langley received a commission to do some design work for Thomas Vernon at Twickenham Park. There he encountered a large sandpit & managed to convert “this perfect nuisance” into “a very agreeable beautiful” spiral garden, using hornbeam hedges. It was the start of a fascination with shapes & serpentine mazes which led him in 1728 to publish his oeuvre “New Principles of Gardening; or The Laying out & Planting Parterres, Groves Wildernesses, Labyrinths, Avenues Parks etc”

"The sub-title gave claim to the fact that the methods described in the book were more ‘Grand & Rural’ than anything before, listing “Experimental Directions for raising the several kinds of fruit trees, Forest Trees, Ever Greens & Flowering shrubs with which gardens are adorn’d.” 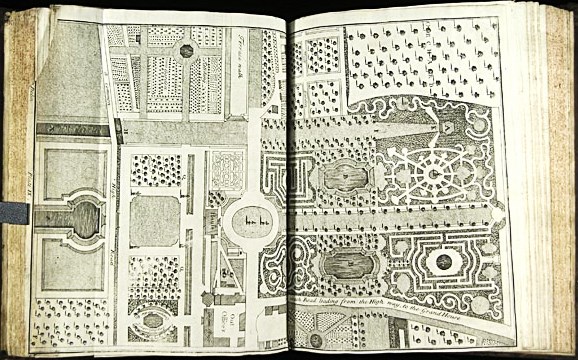 New Principles of Gardening is profusely illustrated with 28 copperplate engravings.

"The book contained very little new, but the illustrations were influential in bringing to people’s attention the use of shapes & winding vistas – he wanted gardens to lead the visitor through the design, rather than have everything in full view. There should be surprises around each corner or, as he put in the introduction: ‘Nor is there any Thing more shocking than a stiff regular Garden; where after we have seen one quarter thereof, the very same is repeated in all the remaining Parts, so that we are tired, instead of being further entertain’d with something new as expected.’

"In other words it marked a move away from the rigidly, geometrical knot gardens favoured by the Elizabethan & Stuart gardeners, even if the world was not yet ready for the picturesque gardens of Capability Brown. Batty loved mazes, but often introduced swirls & patterns far removed from the traditional honeycomb designs. 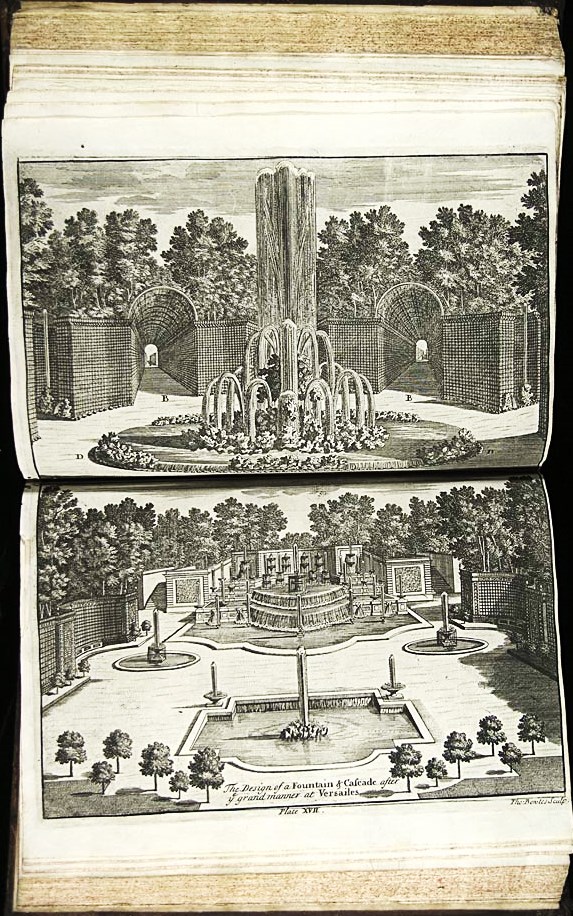 "In some ways his ideas were right at the start of the rococo movement; the problem was that this self-publicist thought that he was now the arbiter of taste in all areas of everyday life. He brought out books on carpentry & furniture design, prompting Horace Walpole to utter “All that his books achieved, has been to teach carpenters to massacre that venerable species, & to give occasion to those who know nothing of the matter, & who mistake his clumsy efforts for real imitations, to censure the productions of our ancestors, whose bold & beautiful fabrics Sir Christopher Wren viewed & reviewed with astonishment, & never mentioned without esteem.”

"He submitted a design for a new Mansion House in London in 1735, only to have it described in the ‘St. James’s Evening Post’ as ‘a curious grotesque temple, in a taste entirely new…’ Undeterred, he pursued his ideas of “arti-natural” gardens, linked with what is now termed “Batty Langley Gothic” architecture. He felt that his writhing shapes & flowing designs were ‘exceeding beautiful in building, as in ceilings, parquetting, painting, paving, &c.’

"He published numerous tomes on building techniques, & on architecture under such inspiring titles as ‘The Builders Compleat Assistant’ (1738); ‘The City & Country Builder’s & Workman’s Treasury of Designs’ (1740); ‘The Builder’s Jewel, or the Youth’s Instructor & Workman’s Remembrancer’ (1741); ‘Ancient Architecture, restored & improved, by a great variety of Grand & Useful Designs’ & in 1748 ‘A Survey of Westminster Bridge, as ’tis now Sinking into Ruin.’

"In general though, he was ridiculed for his designs for buildings. But for his gardening book he deserves to be remembered. ‘Arti-natural’ may not have been revolutionary but at least Langley encouraged trees to have a natural form rather than being pollarded out of existence. Look at a serpentine shape or a paisley design, & remember Batty Langley with affection.