History Blooms at Tho Jefferson's Monticello - The Lewis & Clark Legacy 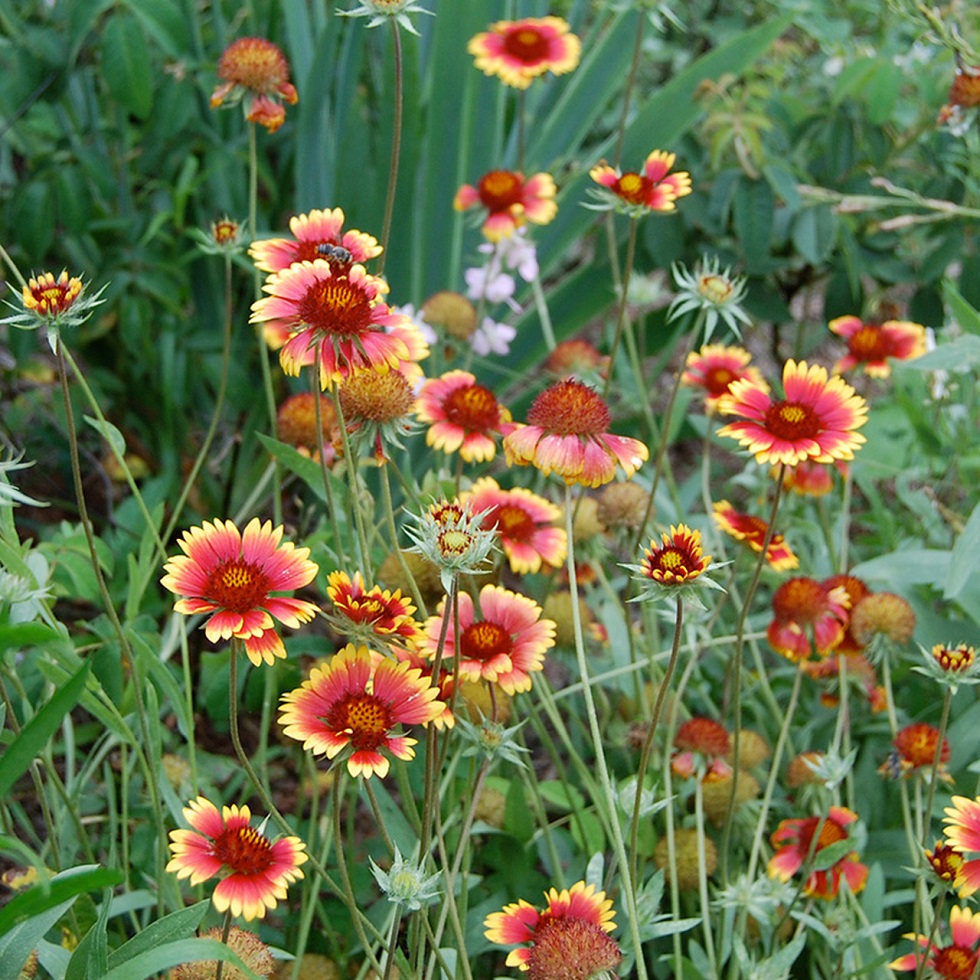 At the west end of Monticello’s Winding Flower Walk several showy species associated with the Lewis and Clark Expedition are on display: Blanket Flower, Snow-on-the-Mountain, and Narrow-leaved Coneflower. As the Corps of Discovery crossed the Continental Divide Meriwether Lewis first collected Gaillardia aristata in the dry hills of the Rocky Mountains. 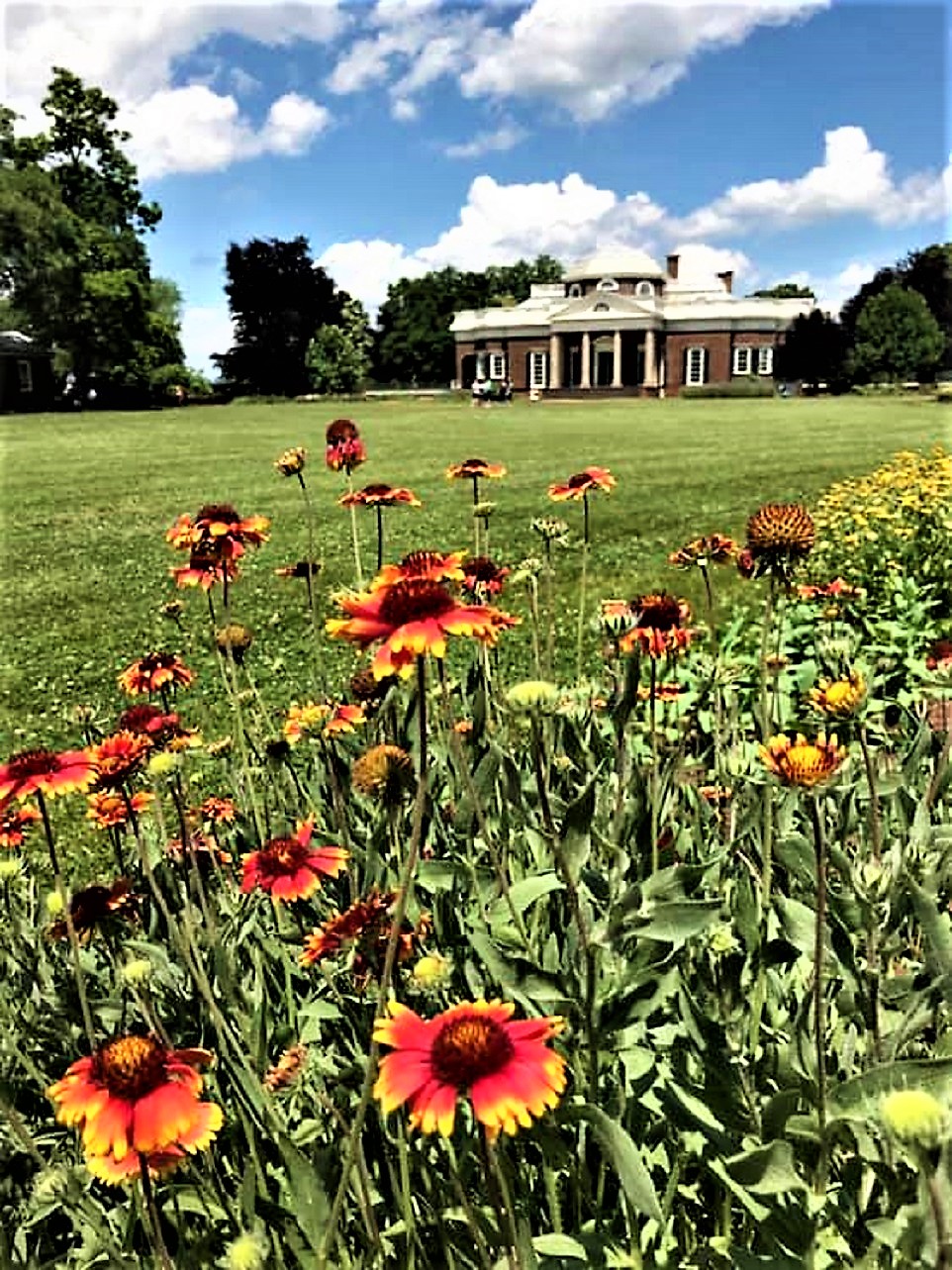 Their three-year journey led Meriwether Lewis, William Clark, & the Corps of Discovery through the central prairies, high plains, the arid Rockies, windswept deserts, & seasonally moist, temperate West Coast regions of North America. The diverse climatic & geographic environments they encountered obviously had immensely disparate growing conditions from the woodlands, swamps, fields, & savannahs of the East. Recognizing this, Thomas Jefferson wrote to Philadelphia nurseryman Bernard McMahon in 1807, at the conclusion of the mission, "Capt. Lewis has brought a considerable number of seeds of plants peculiar to the countries he has visited." At the time, it was difficult to recognize or sort out the plants that might prove easily amenable to gardens from those requiring very specific & difficult to reproduce environmental conditions. Although Jefferson, McMahon, William Hamilton & many others were enormously interested in cultivating these rare new introductions, determining which would thrive in cultivation required years of experimentation & trial & error.

Some plants with ornamental potential were distributed & entered the nursery trade early on, such as Lewis's prairie flax (Linum perenne lewisii), which McMahon was offering by 1815. Other showy flowers like the annual & perennial blanket flowers (Gaillardia sp.) were familiar asters that soon emerged as garden favorites. But, widespread production & marketing of the Lewis & Clark plants occurred gradually over time &, in some cases, it required that the plants be "rediscovered" by other intrepid explorers with more influential connections.

One such naturalist was a journeyman printer from Liverpool, England, Thomas Nuttall, who arrived in Philadelphia in 1808 at the age of 22. His interest in books & plants soon led him to Professor Benjamin Smith Barton of the University of Pennsylvania, who became his friend, tutor, & patron. Barton also saw in Nuttall someone capable of re-collecting many of the Lewis & Clark specimens no longer in his possession. In 1811 Nuttall joined the Astorian Expedition, which was planned to follow the Lewis & Clark Expedition's path to the Pacific. Nuttall headquartered at Fort Mandan & made numerous excursions up the Missouri River, where he encountered many of the original Lewis & Clark species. He was able to send a large shipment to Barton & returned to England just before the outbreak of the War of 1812. The plants & seeds he took with him were distributed to the Liverpool Botanic Garden & marketed through a dealer in American plants. Nuttall's shipment included the camas (Camassia quamash), or quamash as it was known to the Nez Perces, which was first collected by Lewis & Clark June 11, 1806 in Idaho as the explorers followed the Lolo Trail. Like the Native Americans, the men of the Expedition relied on the root for sustenance & Frederick Pursh would later note that the plant was "an agreeable food to Governor Lewis's party." An illustration of this attractive lily, first published in Curtis's Botanical Magazine, 1813, as Scilla esculenta, was made from Nuttall's specimens that were being sold through John Fraser's Nursery in Sloane Square, London. Eventually, many plants collected by Nuttall also were offered for sale at the Linnaean Botanic Garden in Flushing, Long Island, New York.

The Scottish gardener David Douglas was another significant plant explorer who followed a similar track westward. He had served on the staff of the Glasgow Botanic Garden before becoming the foremost plant hunter of the Royal Botanical Society. Unlike the strict pioneer botanists, Douglas was more skilled as a horticulturist. He first went to Oregon Country in 1825 & explored the upper reaches of the Columbia River & parts of the Canadian wilderness. His western travels crossed & crisscrossed the route that Lewis & Clark had taken 20 years before. In 1827 he returned to London with seeds of dozens of distinct species previously known only to botanists, making available to everyone many now-familiar garden plants including California poppy, elegant Clarkia, musk or monkey flower, & blue-pod lupines. Douglas found Gaillardia aristata, first collected by Lewis in the dry hills of the Rocky Mountains, in similar regions from the Rockies to the Pacific Ocean. Intermixed with the typical species, Douglas saw many with a dwarf habit no more than 10 to 12 inches in height. Seeds of this form were collected in abundance & liberally distributed through the Horticultural Society at Kew. Douglas also brought choice North American woody shrubs to gardeners around the world, such as the evergreen Oregon grape-holly (Mahonia aquifolium, honoring Bernard McMahon) & the flowering currant (Ribes sanguineum). Before his untimely death in Hawaii in 1834, when he fell into a pit trap & was gored by a similarly ensnared bull, Douglas had sent some 500 species to William Hooker at Kew Gardens.

Often, these western North American species fared better in England that they did in the eastern United States. The elegant clarkia or "elkhorn flower," named for Captain William Clark by the German botanist Frederick Pursh, became widely popular in 19th-century British gardens. Accounts of London exhibitions in which clarkias received first-class certificates appeared in American magazines of the 1860s. After traveling to Britain, James Vick of Rochester, New York wrote enviously of "immense fields ablaze with bright colors, acres each of pink, red, white, purple, lilac," which he encountered in a country village of Essex. Although, like most seeds men, he offered a broad selection of both single & double cultivars, he readily admitted, "The Clarkia is the most effective annual in the hands of the English florist. It suffers with us in hot dry weather." In hot, humid climates, clarkia has been found to perform best when sown in the fall so that it blooms as the season cools.

Snow-on-the-mountain, Euphorbia marginata, which was new to science when collected by Lewis & Clark in 1806, soon became a common annual in 19th-century seed catalogues. Although its natural distribution is along the west side of the Missouri River in North Dakota, it proved adaptable to a wide range of soil types & growing conditions & likely escaped from cultivation into farmlands from Minnesota to Texas & New Mexico. Still other adaptable western species like the Western Jacob's ladder (Polemonium pulcherrimum) & even Lewis's prairie flax, the North American subspecies of the common European blue flax, never managed to captivate American nurserymen, even though they grow with equal vigor & beauty. Catalogues generally offered only the traditional garden-variety counterparts, probably because it was easier to acquire these perennials from seed sources abroad.

Present-day ecological concerns must temper our rush to obtain certain species, especially those threatened by over-zealous collectors. The prairie coneflower (Echinacea angustifolia), for example, has a long history of medicinal use by Native Indians but now our modern-day infatuation with herbal remedies has led to its near devastation by widespread digging of wild plants.

The concepts of endangered species, diminution of resources, environmental degradation, even extinction were not part of the mindset of that moment in our history two hundred years ago. It was still a time to document & collect, to observe & understand. As Jefferson predicted in 1804, on the eve of the venture, "We shall delineate with correctness the great arteries of this great country: those who come after us will fill up the canvas we begin."

Now, we can reflect upon the pristine landscape stretching out beyond the horizon that was viewed with awe & wonder by the men of the Corps of Discovery. While we know they endured near starvation & exhaustion, sickness, scorching heat, arduous winters, monumental hardships, & profound uncertainty about the road ahead, we can still envy their experiences & take pleasure in their discoveries just as certainly as did Jefferson, who never traveled beyond the mountains of Virginia. Jefferson's destiny was to remain behind & wait with excited anticipation for the seeds, plants & roots the corps would return. In the ensuing years he would pursue the study of this new & sometimes peculiar flora from western lands, content in the belief that "Nature intended me for the tranquil pursuits of science, by rendering them my supreme delight."
at 4:30 AM