From "Pretty" Flowers to Grass to Flowers with Proper, Scientific Names

During & immediately after the Revolution, many gardeners in the early American republic began banishing intricate patterns of flowers in favor of the less ostentatious simplicity of turf. Philadelphian Elizabeth Drinker wrote in her diary, “flower roots…were dug out of ye beds on ye south side of our garden--as my husband intends making grass-plots and planting trees.”

During this period, plain grass flats often defined the terraces of the gentry. However, at the same time, a flood of newly arrived professional seed merchants were enticing the growing gardening public to plant curious bulbs & roots imported from Europe. And the middle class merchants and artisans were beginning to accumulate both leisure time that could be spent in improving their homes and grounds and a bit of extra cash to spend toward this end.  This flurry of marketing paid off, and the style that caught on. By the 1790s, specimen gardens & flowers once again flourished in the Chesapeake.

By the turn of the century, the popularity of intricate flower beds once again soared.  Flowers remained a garden favorite, but gardeners now tended to segregated flowers by type rather than integrating them into a complicated design.  Diarist Anne Grant reported that, in the gardens she saw before the Revolution, flowers “not seen in ‘curious knots’, were ranged in beds, the varieties of each kind by themselves.”

In the 2nd half of 18C America, small private & public botanical gardens were beginning to appear in the colonies & early Republic.  The public was becoming more familiar with the study of botany.  They were aware of the concept of botanical gardens which were the most structured way of observing plants where similar plants were grown & displayed together, often arranged by plant families, & labeled for easy reference.
The Paduan Garden, in Roberto de Visiani’s L’Orto Botanico de Padova nell’ anno MDCCCXLII (Padova, 1842, frontis.).

The great age of plant discovery which began in the 16C with the exploration of the Americas triggered an interest in the scientific study & classification of plants. The plants & seeds which made their way to Europe from foreign ports were cultivated to determine their potential uses. At first this was chiefly to determine their potential medical applications.  The great botanical gardens founded in the 16C at Padua, Leiden, & Montpellier were attached to medical schools.
Johannes van Meurs, 1579-16 Leiden University Garden. Engraving after a design by W. Swanenburgh (1608), from Orlers (1614).

The Hortus Botanicus in Leiden was established soon after the founding of the university in 1575. The head of the early garden there was Charles de l’Ecluse (1526–1609) or Clusius, who had a wide network of correspondents across Europe & had written extensively on botanical subjects. In 1593, he brought with him from Frankfurt a great number of seeds, bulbs & plants to form the foundation of the garden, which had about 1,000 plants when it opened. Other distinguished botanists associated with the garden were Herman Boerhaave (1668–1738) & Johannes Fredericus Gronovius (1686–1762), an early patron of Carolus Linnaeus(Carl Linnaeus, Swedish Carl von Linné) 1707-1778, who would transform plant collecting with his uniform system for classifying them (binomial nomenclature). 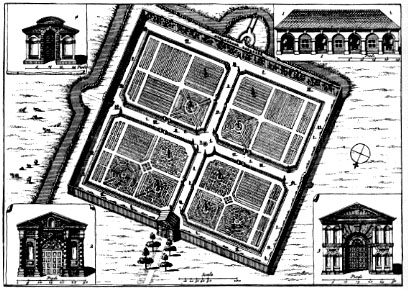 The Oxford Botanic Garden was founded in 1623, by Henry Danvers, later the 1st Earl of Danby (1573–1643), but was not planted until at least a decade later. Danby had arranged to appoint the great London-based gardener & plant collector John Tradescant the elder (1570-1638) as the first gardener, & there is some evidence that Tradescant may have been briefly involved in the planting before he died. Danby then appointed the German botanist Jacob Bobart (1599–1680) as gardener, who was succeeded by his son, also named Jacob Bobart (1641–1719). The 1st catalogue, listing some 1400 plants growing in the garden, was published in 1648.
Chelsea Physic Garden established in the grounds of Chelsea Manor owned by Hans Sloane. Engraving by John Haynes, 30th March 1751.

In England, the Chelsea Physic Garden, founded by the Society of Apothecaries in 1673, came to prominence under Scottish gardener Philip Miller (1691-1771) & remained the premier garden in the country during much of Miller’s lifetime. Sir Hans Sloane (1660-1753) had granted the Society a perpetual lease on the Chelsea property, & one of the conditions was that each year 50 new plants were to be described & donated to the Royal Society as dried specimens. This required the continuous introduction of new plants & ensured that Chelsea was at the forefront of knowledge about their cultivation. Miller was a highly skilled horticulturist & many imported plants & rare species of indigenous plants were successfully grown by him at Chelsea. Miller  networked, & he was at the center of a vast network of plant enthusiasts exchaning plants & seeds with other gardeners throughout Britain, her colonies, & Europe.
Pagoda & Temperate House, Kew Gardens

As Chelsea was fading in the latter part of the 18C, the great gardens at Kew were growing in importance under the leadership of Sir Joseph Banks & head gardener William Aiton (1731–1793) who had trained under Philip Miller at Chelsea. Aiton produced the 1st printed catalogue of the gardens at Kew, listing some 5600 species. Just over two decades later, the 2nd edition of the catalogue by his son William Townsend Aiton (1766–1849) listed over 11,000 species. 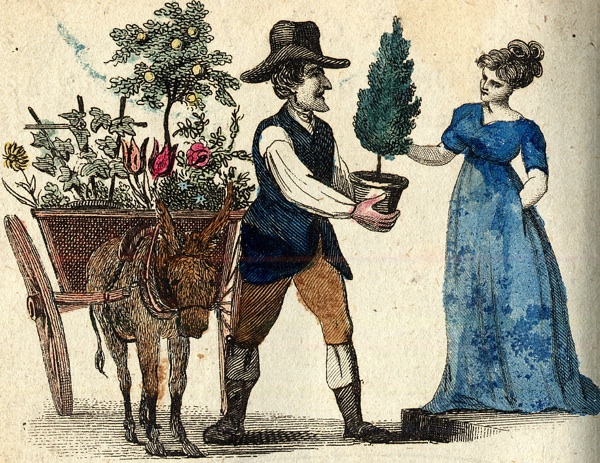 In London, street vendors were selling plants door to door. New Cries of London Sold by Darton and Harvey 1803 Flowers for your Garden

In Philadelphia, Bartram's is America's oldest surviving botanic garden. John Bartram (1699-1777), early American botanist, explorer, & plant collector, began his garden in 1728, when he purchased a 102-acre farm close to Germantown. Bartram's Garden grew into an extensive collection of familiar & intriguing native plants; as he devoted his life to the discovery of examples of new North American species. Bartram's lucrative business centered on the transatlantic transfer of plants.
In 1748, what is now Lafayette & Astor Place, was New York City’s first botanical garden, established by a Swiss physician, Jacob Sperry, who farmed flowers & hothouse plants. Jacob Sperry, born in Zurich in 1728, came to New York at the age of 20, & although educated a physician, decided to become a florist. He had means at his command, with which he purchased this then uncultivated tract of pasture land, & established himself as a horticulturist. He built a house near by, where he resided, rearing a family of 4 sons & 5 daughters. In 1804, Jacob Sperry sold the much improved property to John Jacob Astor for $45,000.
An 1801 map of the Astor Place when it was the land of Jacob Sperry, a Swiss florist, physician, and gentleman.

In the British American colonies, just as in Europe, many early botanical gardens focused on the medicinal uses of plants being collected.  In 1769, Dr Peter Middleton, professor of medicine at King's College, speaking at the opening of the Columbia Medical School in New York City stated, "By botany, we are  instructed in the natural history and distinguishing characters of plants. This, pursued as a science, or branch of medical study, presents to us a fund of knowledge, both valuable and ornamental  As this continent yields most of the medical plants now in use, and abounds also with a variety of others, whose qualities we are as  yet but little acquainted with... a teacher of botany will soon be appointed, and a botanical garden laid out, and properly furnished? This would open an extensive field for further discoveries in, and for large acquisitions to the materia medicia."  David Hosack, who would eventually establish the Elgin Botanic Garden, reported that in 1794, the New York Agricultural Society was endorsing that the botanical garden be connected with an endowed professorship in Botany.  In the next 20 years, botanical gardens would pop up at Harvard, Princeton, and at the universities of Pennsylvania & South Carolina.
Botanic Garden at Elgin in the Vicinity of the City of New York. About 1806 William Satchwell Leney (American artist, b. England, 1769–1831) after Louis Simond (American artist, b. France, 1767–1831)

By 1785, George Washington had dedicated a part of his gardens to botany.  He wrote in his July diary, "Sewed one half of the Chinese Seed given me by Mr. Porter and Doctr. Craik in three rows in the Section near the Quarter (in my Botanical Garden.)"  In June of the next year, Washington recorded dining with Francois Andre Micheaux, "a Botanist sent by the Court of France to America...he returned afterwards to Alexandria on his way to New York...where he was about to establish a Botanical Garden."

In 1787, Rev Manassah Cutler wrote that Dr Benjamin Rush was "endeavoring to raise a fund for establishing a Botanical garden" in Philadelphia.
Thomas Jefferson wrote to his French friend Madame de Tessé, 25 April 1788, "Botany is the school for patience, and it’s amateurs learn resignation from daily disappointments."  And in a letter to Benjamin Smith Barton on , 22 Oct. 1810, he wrote, "Botany here is but an object of amusement, a great one indeed and in which all our family mingles more or less. Mr Randolph is our leader, and a good one. My mind has been so long ingrossed by other objects, that those I loved most have escaped from it, and none more than botany."  On  to Thomas Cooper, 7 Oct. 1814, he expressed his admiration, "Botany I rank with the most valuable sciences, whether we consider it’s subjects as furnishing the principal subsistence of life to man & beast, delicious varieties for our tables, refreshments from our orchards, the adornments of our flower-borders, shade and perfume of our groves..."  And just months before his death, he was advocating for botany to be included in the courses at his beloved University of Virginia, He wrote to John Patten Emmet, 27 Apr. 1826, "It is time to think of the introduction of the school of Botany into our Institution."
In both England & in the early American republic, botany & new classification systems for plants caused a surge in collecting plants. In 1789, William Hamilton instructed the gardeners at his Philadelphia estate, Woodlands, to plant “exotic bulbous roots…at six or eight Inches from each other…taking care to preserve the distinctions of the sorts.” 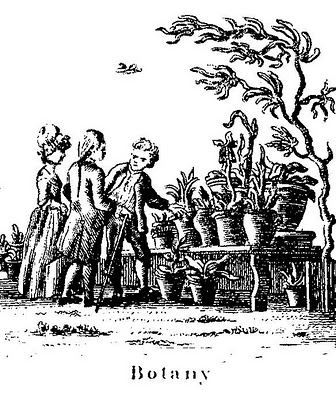 In 1805, Rosalie Steir Calvert (1778–1821) wrote to her father from Riversdale in Prince George's County, Maryland, "The fancy for flowers of all kinds is really increasing; everyone takes an interest, and it is a great honor to have the most beautiful.” The next spring, she was “curious to know if it is becoming fashionable in your country to become horticulturalists. Here we occupy ourselves with that more every day and are getting much better.”  Her father sent tulip bulbs in late 1807, and Rosalie Calvert wrote back, “now I will have the most beautiful collection in America, and I assure you my reputation is already quite exalted.” 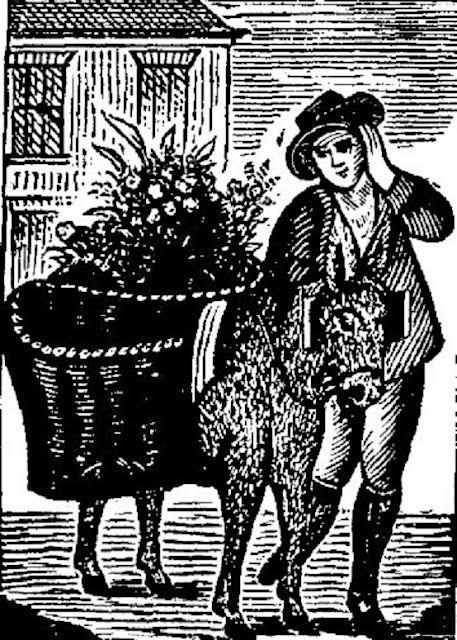 In the early American republic, townsfolk began to frequent the local nurseries popping up in towns up and down the Atlantic coast.  A new cycle in English & early American pleasure gardening had begun. 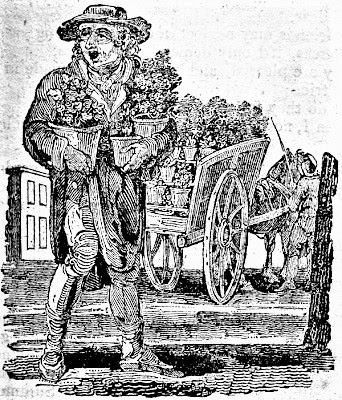 Here is another street vendor selling plants door to door.  London Melodies; or Cries of the Seasons. Published anonymously (before 1818) "All a Blowin', Choice Shrubs and Plants, Alive and Growing"
at 4:00 AM