Ladies Gardening Indoors & Out for Decoration 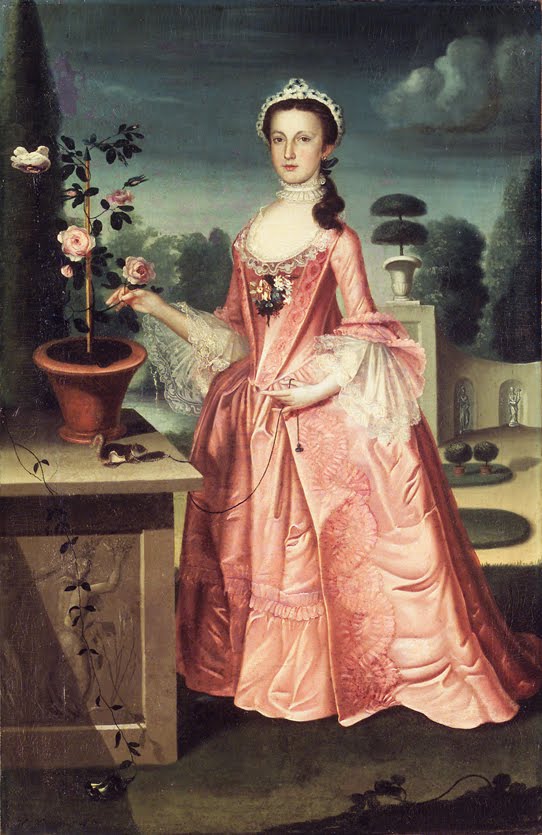 There are portraits of women in the British American colonies & early republic depicting ladies, and even one gentleman, with potted plants. However, traditionally married American women of means might be in charge of daily activities in the greenhouse or the kitchen garden, but they were not often the master of the grounds. 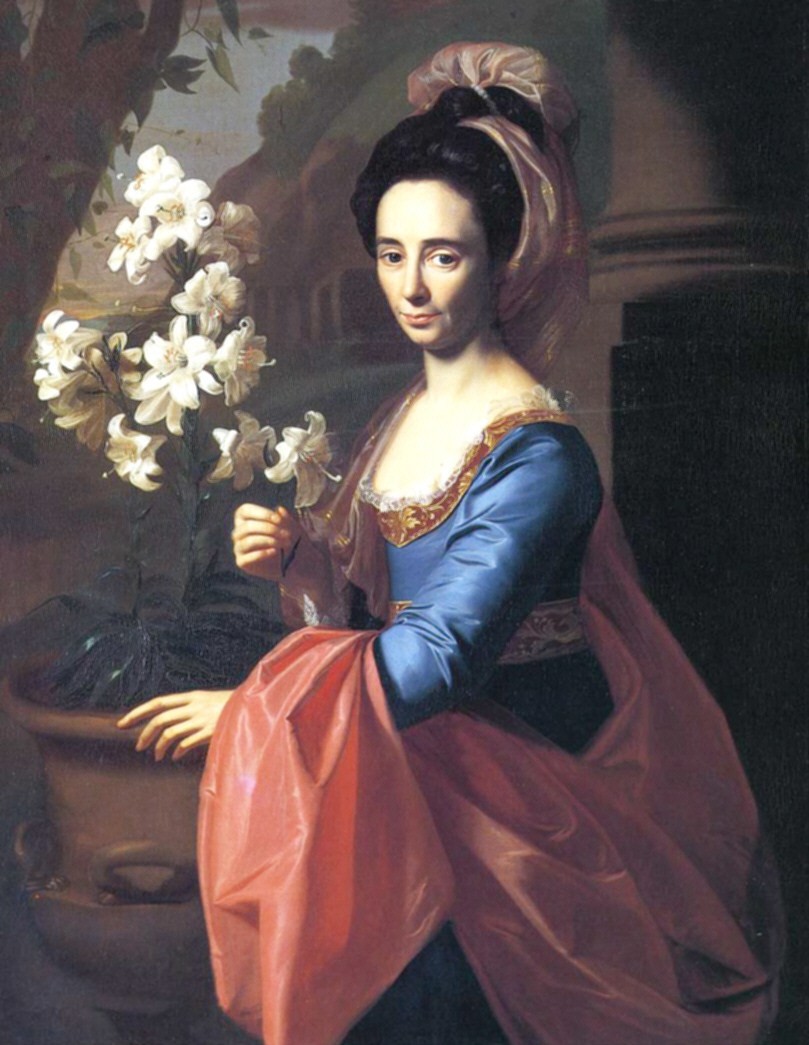 This was not always true. Eliza Lucas Pinckney, took charge of her father's plantations in South Carolina, when she was a teenager; and when she married an older man who died in a few years, she was once again in charge. The strong-willed gentlewoman made all the decisions about her plantations' gardens & grounds and wrote in a 1742 letter to a friend of the garden she was planning, “it shall be filled with all kinds of flowers, as well wild as Garden flowers, with seats of Camomile & here & there a fruit tree--oranges, nectrons, Plumbs.” 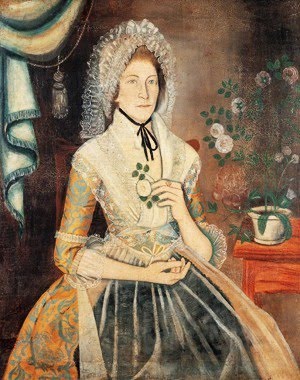 As the 19th century dawned, women began to play a more important role in planning the garden, especially its ornamental components. Many busy husbands, more interested in the growing commercial possibilities in the transitional agrarian society, began to leave the management of the gardens to their wives.

At the Riversdale plantation in Prince George’s County, Maryland, Rosalie Stier Calvert wrote to her father on May 19, 1805, “We are getting much better at the art of gardening.” 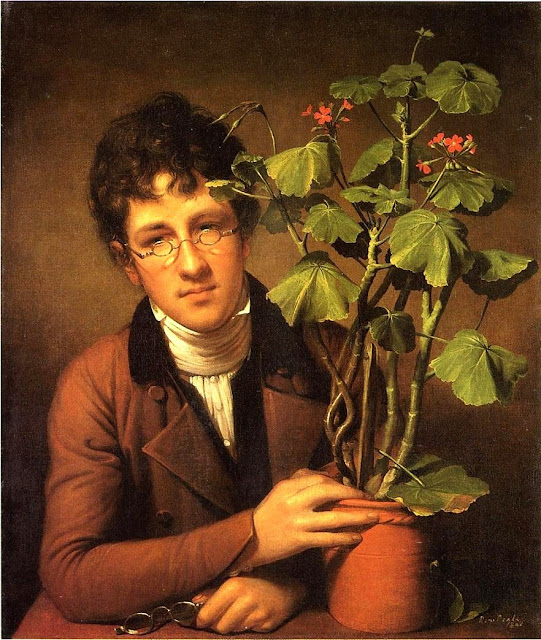 By the beginning of the 19th century, the ladies were becoming more interested in decorative flowers & potted plants offered to them by the new seed & nursery dealers such as Irish immigrant seedsman Bernard M'Mahon (1775-1816) in Philadelphia. Flowers decorated their grounds in the summer and potted plants decorated their interiors during the winter months.

Bernard M'Mahon's close friend, New Yorker Grant Thorburn (1773-1863) wrote of painting flower pots in 1801, which lead to his flourishing New York seed business, "About this time the ladies in New York were beginning to shew their taste for flowers; and it was customary to sell the empty flower pots in the grocery stores; these articles also comprised part of my stock...

In the fall of the year, when the plants wanted shifting prepatory to their being placed in the parlour, I was often asked for pots of a handsome quality, or better made...

I was looking for some other means to support my family. All at once it came into my mind to take and paint some of my common flower-pots with green varnish paint, thinking it would better suit the taste of the ladies than the common brick-bat colored ones.

I painted two pair, and exposed them in front of my window. I remember, just as I had placed the two pair of pots in front of my window on the outside, I was standing on the sidewalk, admiring their appearance, a carriage came along, having the glasses let down, and one lady only in the carriage. As the carriage passed my shop, her eye lit on the pots; she put her head out at the window, and looked back, as far as she could see, on the pots...

They soon drew attention, and were sold. I painted six pair; they soon went the same way. Being thus encouraged, I continued painting and selling to good advantage. These two pots were links of a chain by which Providence was leading me into my present extensive seed-establishment...

One day, in the month of April following, I observed a man for the first time selling flower-plants in the Fly market, which then stood in the foot of Maiden Lane. As I carelessly passed along, I took a leaf and rubbing it between my fingers and thumb asked him what was the name of it. He answered, a rose geranium.

This...was the first time that I ever heard that there was a geranium in the world; as before this, I had no taste for, nor paid any attention to, plants. I looked a few minutes at the plant, thought it had a pleasant smell, and thought it would look well if removed into one of my green flower pots, to stand on my counter to draw attention...

I did not purchase this plant with the intention of selling it again, but merely to draw attention to my green pots, and let people see how well the pots looked when the plant was in them. Next day, some one fancied and purchased plant and pot."

Thorburn had immigrated to New York from Scotland, in 1794. In Scotland, he was a nailmaker before he sailed for America. He was noted for his charity, and during the epidemic of yellow fever in 1798, he & his wife remained in the city, devoting themselves to the care of the victims. In 1801, he became a grocery merchant in Newark, New Jersey, but soon moved his business to New York City., where he he sold novelties & hardware. Once he discovered in 1805, that his flower pots sold better when they were painted with flowers in them, Thorburn evolved into a very successful seed dealer & nurseryman selling to the ladies of New York City, until he retired in 1854. The G. Thorburn & Son’s catalog of 1822 was issued in pamphlet form and included illustrations. Thorburn died in New Haven, Connecticut on January 21, 1863. 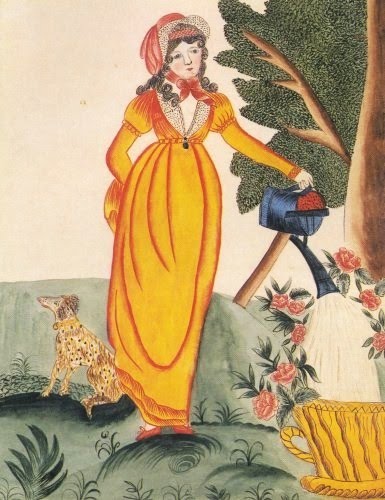