The end of the 18th century saw increased social stability in the colonies & a climax of a revolution in science, associated with Sir Isaac Newton, that resulted in fundamental changes in man’s attitude toward the world about him. For the enlightened Chesapeake gardener, the garden nourished mind & spirit as well as body. The American pleasure garden became a visual expedient, combining the religious Eden myth with an evolving set of social & political goals, espoused by, among others, Thomas Jefferson & later by J. Hector St. John de Crevecoeur.

These religious & social concepts coincided with revolutionary new ideas about human beings’ conceptual processes that were shaped by John Locke & Joseph Addison. In the 18th century, Locke was interpreted to believe that visual images, such as those of the garden, were the primary conduit through which humans gained knowledge of external reality. 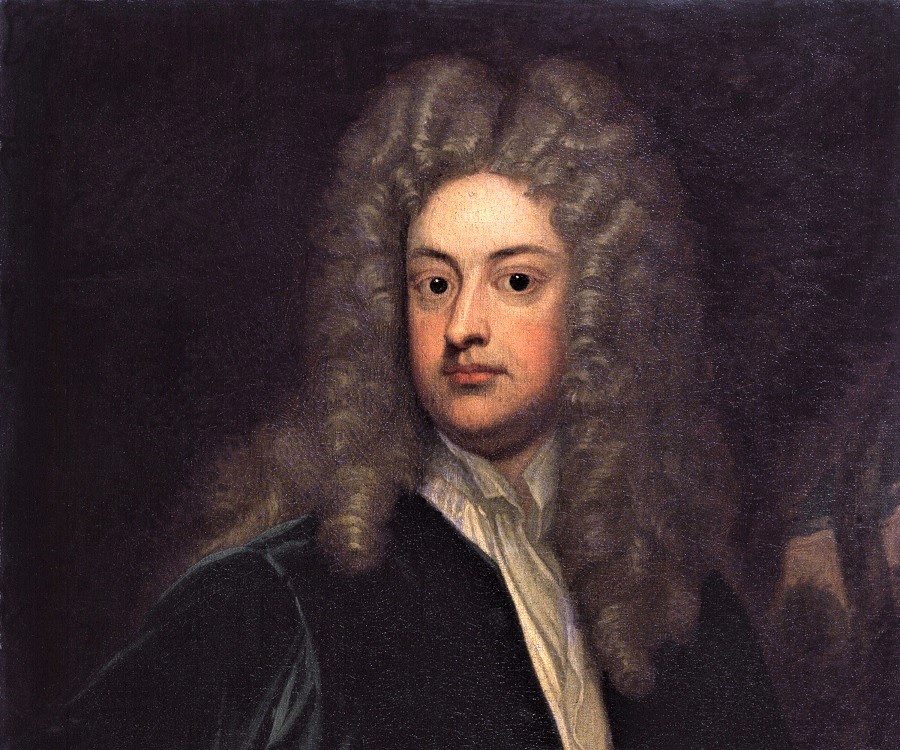 Joseph Addison 1672-1719 wrote of a spectrum of modes of perception, with the gross sensual pleasures at one pole & pure intellect at the other. The garden was an ideal illustration of Addison’s conceptual theory; because it appealed to all of the senses of the human animal, who tended to submerge these instincts, as he became more cerebral. The goal was some balance of the two. Addison stated, “We find the works of nature still more pleasant, the more they resemble those of art.” Nature & the garden were vehicles to sharpen both intellect & spirit. Just after reading Addison’s works, one Chesapeake gentleman wrote to a friend, “The imagination acts intuitively; it seizes at once the sublimest parts as the eye catches objects. Nature, Hills, rocks, woods, precipices, water-falls rush upon the mind.”

Later, Crevecoeur saw the virgin American land filling Everyman’s mind with irresistible aspirations, but he too believed that pure nature was not as inspiring as improved nature. Landscape should be ordered by humans, a collaboration of human vision & toil plus nature’s spontaneous process. “This formerly rude soil has been converted by my father into a pleasant farm,” he wrote, “and in return it has established all our rights.” Crevecoeur saw a direct relationship between ordering the land & gaining political freedom. He theorized that people, like plants, derived their “flavor” from the soil, & he declared that America’s soil was still pure. Crevecoeur believed that in America, with its newly emerging institutions, the relationship between people & the external environment they shaped around them was extremely important.

In his Notes on Virginia, Jefferson stated that the physical attributes of the land were less important than its metaphoric powers. The land was an image in the mind of the new American citizen, representing aesthetic, political, & religious values. In Notes, Jefferson wrote, "Cultivators of the earth are the most virtuous and independant citizens." In the 18th century, the garden was seen by many as an important visual determinant in the actions & responses of people.

Even a clockmaker-innkeeper was aware of the impact of these ideas on his life in the newly emerging nation; among the names William Faris gave the tulips he cultivated were “Sir Isaac Newton,” “The Spectator,” “Jefferson” & “The Farmer.”

Literate citizens of the new nation were looking to the Italian Renaissance & its classical antecedents for artistic & scientific knowledge, as well as for guidance in establishing their new republic. The 1783 catalogue of the circulating library in Annapolis & the 1796 catalogue of the Library Company of Baltimore offered their patrons Renaissance authors, such as Palladio, & their classical predecessors: Virgil, Horace, Pliny, & Columella. Columella believed that agriculture & gardening were “sister to wisdom.”
at 4:00 AM