Philadelphia author & garden shop owner Bernard M’Mahon consistently referred to gardening as an art, just as his friend Thomas Jefferson did throughout his lifetime.

In 1779, when Jefferson was governor of Virginia & a member of the Board of Visitors at the College of William & Mary, curriculum reforms resulted in the appointment of Robert Andrews as “Professor of Moral Philosophy, the Laws of Nature & of Nations, & of the Fine Arts.” Jefferson defined the fine arts as “Sculpture, Painting, Gardening, Music, Adventure, Poetry, Oratory, Criticism.”

In the 1783 Catalogue of the Annapolis Circulating Library, where books were grouped in categories, the section containing books on pleasure gardening was titled “Gardening, Poems, Plays, etc.” Jefferson even wrote of his garden in terms of art. In 1807, Jefferson wrote, “The canvas trimmed very high, so as to give the appearance of open ground.”

As most literate 18th-century Americans were well aware, the educated man of the Italian Renaissance hoped to be at least knowledgeable in all of the fine arts, from painting, sculpture, & music to architecture & gardening. M’Mahon was conversant in classical letters, including history & literature.

M'Mahon knew that under Louis XIV, the French carried to its culmination the Italian Renaissance rationale for ordering the external environment for both use & ornament.

In France, the concept of unifying the structure with its setting evolved into a theatrical presentation of the geometric house, balanced with a descending progression of architectural elements, such as smaller buildings, fences, gates, & steps. The great house & its dependencies were set at the pinnacle of an array of landscape features that led up to it. It was a formula adopted in the British American colonies & early republic.

These designs were the work of powerful people engaged in the ultimate battle--trying to control nature. In France, complicated, controlled inert parterres outlined by clipped hedges, statues, topiary, & planned groves of trees connected the whole with the natural countryside surrounding it.

Here was the supreme unity of architecture, the decorative arts, the garden, & the natural site. Just as it had for centuries, the 18th century American garden was meant to define & expand the image of its owner. 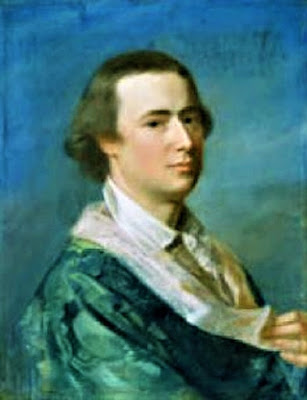 The Reverend William Bentley (1759-1819), describing the garden of Boston merchant Joseph Barrell, wrote that he was taken to Barrell's garden where he, “Was politely received by Mr. Barrell who shewed me in large & elegant arrangements for amusement & philosophical experiment.” Joseph Barrell’s garden was his stage. Here he excitedly explained each garden plant & unique features to his exhausted guests until well after dark. Barrell's garden was his stage.  William Bentley was an American Unitarian minister, scholar, columnist, and diarist. He possessed the second best library in the United States (after Thomas Jefferson), and was an indefatigable reader and collector of information at the local national and international level. 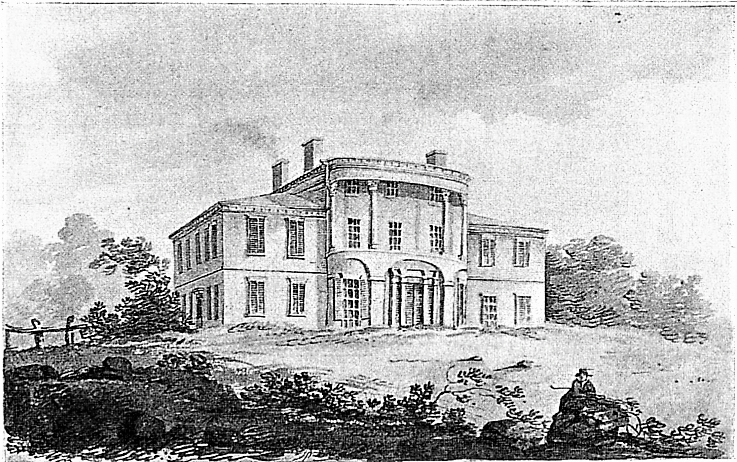 The house Joseph Barrell built in Somerville, MA. The view of country seats & gardens sitting high up on the American landscape inspired patriotic feelings in some observers and certainly elevated the owner to some exaulted plateau. Of Joseph Barrell’s grounds one visitor wrote in 1794,
Where once the breastwork
mark’d the scenes of blood,
While Freedom’s sons inclossed the haughty foe,
Rearing its head majestic from afar
The venerable seat of Barrell stands
Like some strong English Castle..

Gentlemen of the Italian Renaissance used their gardens for theatrical presentations. Townspeople up & down the Chesapeake were very familiar with devices of the theater. Plays had been performed in Williamsburg for years, & a playhouse opened in Annapolis in 1752, next door to craftsman William Faris’s home & shop.

Although an 18th-century gentleman’s garden might never be used for a formal theatrical presentation, it was the outdoor platform he designed & on which he presented himself to his visitors & to the community at large.

Manipulating the view as a stage affect for the sake of the visitor was a continuing theme throughout M’Mahon’s treatise. The great & the not so great enjoyed garden watching. It was this concept, intentionally stripped of most of its ostentations excesses, that gentlemen adopted to help define their places in the emerging republic.

In the new nation, the gentry often used the evolving science of optics to direct the viewers’ attention & to lengthen or shorten perspectives, hoping to enhance the onlooker’s view of the property & opinion of its owner.
at 4:00 AM