The word command appeared very frequently in 18th century America describing the situation and prospect of a gentleman's house or property.

In the South Caroliana Gazette in 1734, an advertisement for property for sale in Charleston, South Carolina, emphasized both the garden and the view, To Be Let or Sold...on an island which commands an entire prospect of the Harbor...A delightful Wilderness with shady Walks and Arbours, cool in the hottest seasons. A piece of Garden-ground where all the best kinds of Fruits and Kitchen Greens are produced planted with Orange, Apple, Peach.

In 1759, traveler Andrew Burnaby noted of Mount Vernon in Virginia, The house is most beautifully situated upon a very high hill on the banks of the Potomac; and commands a noble prospect of water, of cliffs, of woods, and plantations. 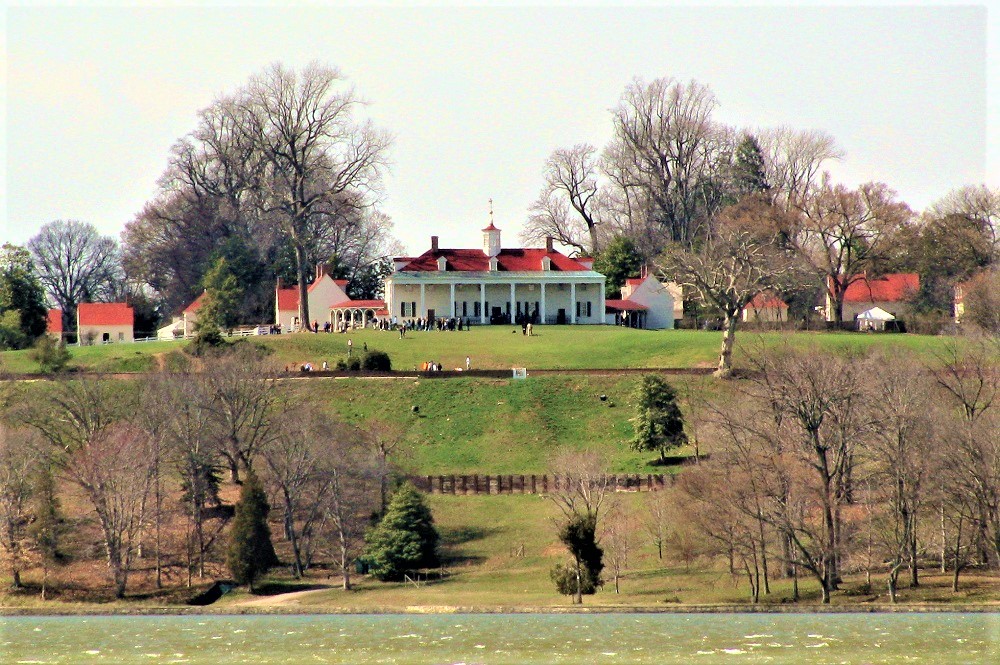 Mount Vernon in Virginia, high on a hill overlooking the. Potomac River.

As we noticed in the Location, Location, Location posting, the Governor's House in Annapolis, Maryland, garnered alot of attention. William Eddis also described the unfinished governor's house in 1769, The garden is not extensive, but it is disposed to the utmost advantage; the center walk is terminated by a small green mount, close to which the Severn approaches: this elevation commands an extensive view of the bay and the adjacent country.

In 1764, Lord Adam Gordon described the still unfinished Maryland governor's house in Annapolis, "commanding the view of the Town, the River Severn, the Bay, and all the Creeks." Lord Adam Gordon (1726–1801) was a Scottish general. During 1764, he toured the West Indies, the American colonies, and Canada, looking to invest in land & recording his impressions. He returned to England in 1765.

A plantation in King and Queen County, Virginia was offered for sale in the 1770 Virginia Gazette, "The manor plantation is beautifully situated, commanding a fine view of the river and marshes for many miles... a large falling garden inclosed with a good brick wall." Vistors could stand in the garden and survey the surrounding countryside.

The Rev. Mannasseh Cutler viewed, Robert Morris' The Hills near Philadelphia, Pennsylvania, in the 1780s, giving this report, ...the gardens and walks are extensive, and the villa...has a commanding prospect down the Schuylkill. 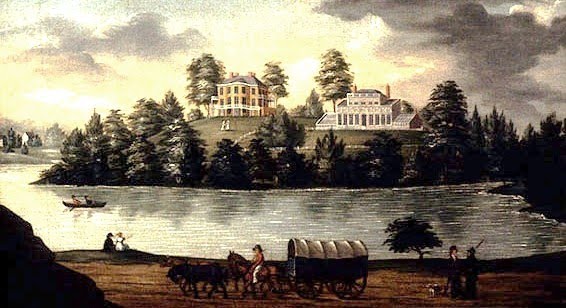 From Philadelphia a view of Lemon Hill, the house that replaced Robert Morris's house The Hills. by John Woodside in 1807. Historical Society of Pennsylvania.

In 1783, Thomas Lee Shippen described Westover on the James River in Virginia, noting that it had a ...commanding a view...about 300 by 100 yards in extent an extensive prospect of James River and of all the Country and some Gentlemen's seats on the other side. 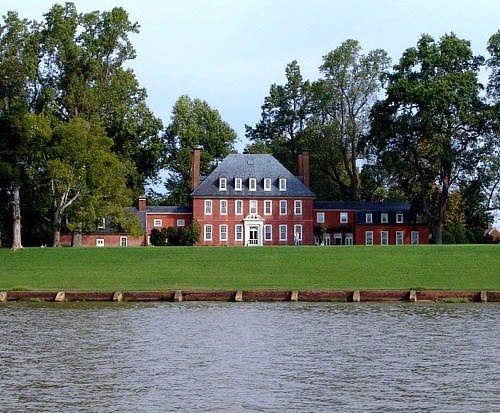 Westover on the James River in Virginia.

British Lt. John Eyns wrote of Governor John Hancock's house in Boston, Massachusettes, in 1787, ...there are a number of houses situated on Beacon hill which stand high and command elegant prospects particularly at high water. That of Governor Hancock stands the most conspiculus just at the top of the common with a full view of the Mall before it besides its distant views of the harbour and adjacent country.
The Hancock House on Beacon Hill in Boston with its terraced entrance garden was built in 1737, close to the State Capitol building.

In 1788, Lt. Eyns described Mount Vernon, Virginia, in much the same manner, It had the Command of a View each way of some Miles up and down the River Potomack which is here about two miles broad On which during the Summer there are ships constantly moving. 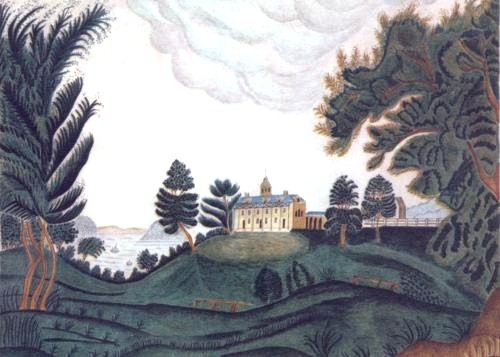 Mount Vernon by Susan Whitcomb in 1842.

Thomas Anbury wrote of the Virginia house he was visiting early in 1789, The house that we reside in...a commanding a prospect of near thirty miles around it, and the face of the country appears an immense forest interspersed with various plantations.

Willliam Loughton Smith wrote in his journal on September 8, 1790, of General Schyler's house & grounds in Albany, New York, I took a walk to General Schyler's: his house...stands on a rising ground above the river and enjoys a commanding view.

Garden Facade of Gunston Hall in Virginia walking up the hill from the Potomac River.
And the following year, Smith described Colonel George Mason's Gunston Hall to the south of Alexandria, Virginia, The house is rather an ancient brick building, with a neat garden, at the end of which is a high natural terrace which commands the Potomac.

In 1793, Patrick Campbell wrote of Mr. McIntyre's house at Albany, New York, I went along with Mr. McIntyre from Albany to his house...we ascended a high hill, of a thin and stony soil, partly clear and inhabited, and which commands a fine prospect of the country all around.
Philadelphia The Woodlands, William Strickland after William Birch, ca. 1809. 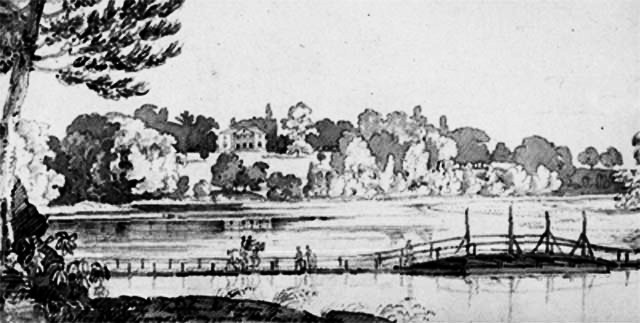 A View of the The Woodlands from the Rocks on the Schuylkill River.

In 1799, Isaac Weld passed through Washington, D. C. and noted of the White House, The house for the residence of the president stands north-west of the capitol, at the distance of about one mile and a half. It is situated on a rising ground not far from the Patowmac, and commands a most beautiful prospect of the river, and of the rich country beyond it. The view of the Potomac from the porch at Mount Vernon.

After George Washington's death, visitors were still making pilgrimages to view his home Mount Vernon in Virginia. In 1813, Elbridge Gerry, Jr. wrote, Back of the mansion is a summer house, which commands an elegant view of the Potomac.
at 4:00 AM