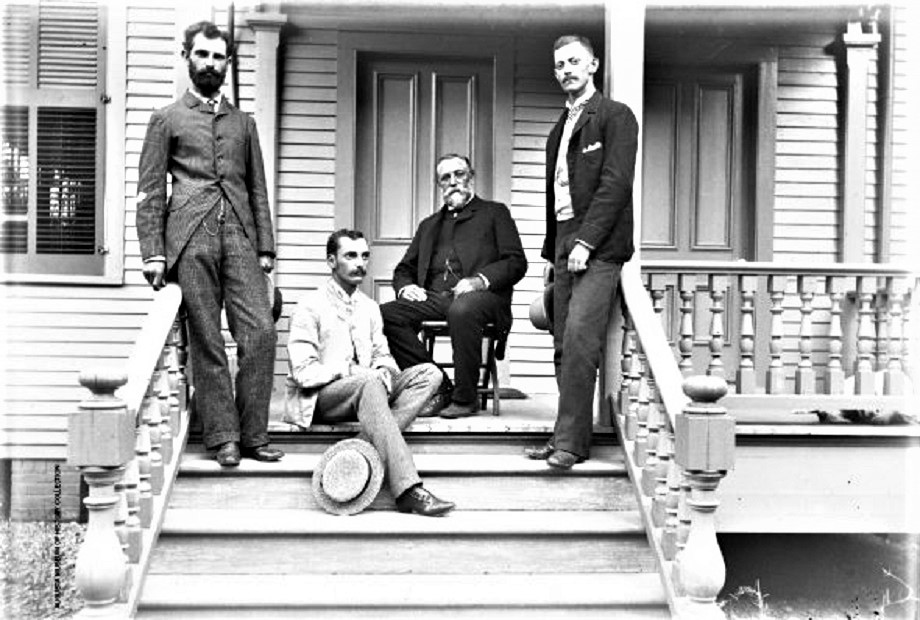 "Louis Mathieu Eduoard Berckmans was born in 1801 in Lierre, Belgium, a small town between Brussels and Antwerp, known for lacemaking, textiles and the crafting of musical instruments. His coming of age experience included the Napoleonic Wars, the consolidation of his country with Holland following the Congress of Vienna in 1815 and the subsequent unrest and eventual secession of Belgium years later. A member of the lesser nobility, he was well-educated, spoke French and German, enjoyed and played music, and created art. Trained as a physician, he also loved the natural world and became well-known in his homeland as a talented horticulturist.

"In the 1820s, he married the love of his life, Marie Gaudens. More than 40 years after her death he would remark to friends, “My first wife…was an angel from heaven, God bless her.” In October 1830 Marie gave birth to a son, Prosper Jules Alphonse, and died soon after. Prosper became Louis’s “dear boy,” the apple of his eye. Four years later Louis remarried Holland-born Elizabeth Charlotte Arnoldine Rubens who gave him a second son, Emile, in 1837. According to the Smithsonian, Prosper was educated in France in horticulture and at age 17 returned to his father’s estates while studying at the Botanical Gardens in Brussels.

"At age 20, with his father’s blessing, Prosper sailed to the United States to search for a good home for the family. There he travelled extensively, including a sojourn in Georgia to examine Rome, where a colony of Belgian expatriates had already settled. In July 1851, he returned North for the arrival from Belgium of his stepmother, younger half-brother and father, who had brought horticultural specimens from the homeland.

"In spite of his son’s enthusiasm for Georgia, the elder Berckmans decided to settle in Plainfield, N.J., where he and Prosper began a nursery to cultivate pears and experiment with other plants. The family was well-received and met some American luminaries. New Yorker Andrew Jackson Downing, often considered the father of American landscape, and author of the 1845 Fruit and Fruit Trees of America, sought out Louis Berckmans who he declared would “be a great acquisition in the society of American fruit growers and pomologists…. We rejoice that such a man has settled among us.” Downing’s unfortunate death in July 1852 cut short what might have been a long and productive relationship. By 1856 Dr. Berckmans was prominent enough that he was asked to judge in the United States Agricultural Exhibit. In New Jersey, Prosper married New Jersey-born Mary Craig, who in 1857 gave birth to the first of three sons, Louis Alphonse.

"After several New Jersey winters, the South’s climate began to beckon. In 1857 Dr. Berckmans bought almost 145 acres on the south side of Washington Road and dubbed it Pearmont. To the west was the Fruitland Nursery property of Dennis Redmond who, like Dr. Berckmans, was an immigrant. Born in Ireland, Redmond had settled in Utica, N.Y. Hired by Daniel Lee, a fellow New Yorker who had moved to Augusta to become editor of the Southern Cultivator, Redmond became first a correspondent, then assistant editor, for the magazine. Both Lee and Redmond were proponents of agricultural reform in the South, including fruit cultivation, which they promoted in the pages of their publication.

"Redmond’s property had been the orchard portion of James Coleman’s Bedford Nursery. As early as 1853 Redmond had begun advertising in The Augusta Chronicle the sale of fruit, fowls and trees from Bedford Nursery. And in 1854 he purchased 315 acres that included the Bedford orchard and gave the nursery the name Fruitland. In 1858 Louis Berckman purchased Fruitland from Redmond and combined it with Pearmont. Redmond then bought the land to the east of Pearmont naming it Vineland for the vineyards he began to cultivate there. (For an interesting analysis of Fruitland and Redmond, readers might enjoy an article by Dr. Philip Herrington, Augusta native and history professor at James Madison University, in the November 2012 issue of the Journal of Southern History.) Dr. Berckmans and Prosper’s young family moved to Augusta in 1857 with Emile following in 1858. Louis’s wife Elizabeth never joined him in Augusta, staying in Plainfield where son Emile later returned. Elizabeth, along with an Irish servant named Anna, appeared in the 1860 census living with $20,000 in real estate and $3,000 in personal property. In 1863 Emile, living in Plainfield, registered for the U.S. Army draft enacted in that year. Emile evidently remained in the North for life. In 1870 he married a New Jersey girl named Elizabeth, a fellow music teacher. In the Plainfield city directory of 1883, his occupation was still music teacher. ”

"In 1858-59 the first ads for the Descriptive Catalogue of Fruit and Ornamental Trees, Shrubs, Vines, Roses, Evergreens, Hedge Plants, &c., cultivated and for sale at Fruitland Nursery in Augusta, Ga., by P. J. Berckmans & Company” began appearing. The catalog could be obtained at Berckmans or at Mr. V. LaTaste’s Grocery Store in town. By 1860 Prosper appeared in the census with real estate worth $18,000 and a personal estate valued at $8,000. In addition to his father, wife and son, the household included Joseph Tice, a laborer from Belgium; Peter Benne, a nurseryman from France; Albert Coles, a clerk from New Jersey; and Rose Kelly a servant from Ireland. They were building one of the largest and most successful nurseries in the South. 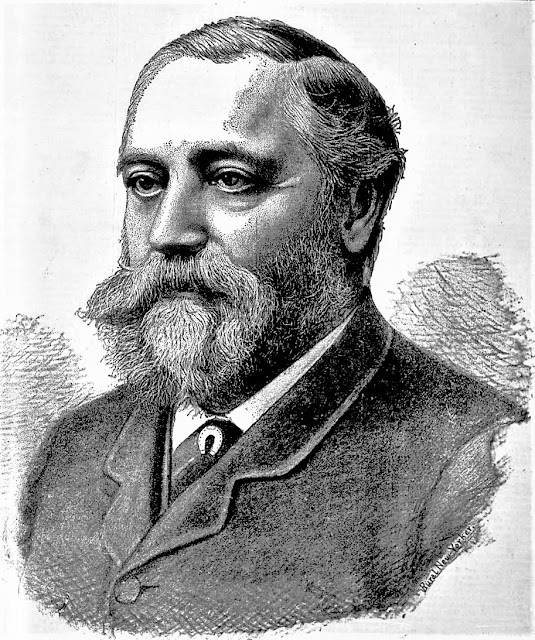 "During the Civil War, they provided vegetables and fruits for the Confederacy and donated to the mayor’s charity for wounded soldiers. Prosper and Mary added two more sons to their family—Robert Craig, born in 1864, and Prosper Julius Alphonse Jr., born in 1866. During the Civil War they provided vegetables and fruits for the Confederacy… In 1870 Dr. Louis M.E. Berckmans left the business in the capable hands of his son and, upon the invitation of Georgia author and newspaper columnist Charles Smith, better known as Bill Arp, he moved to Rome, Ga., where he lived on Horse Leg Mountain, which he nicknamed Mt. Alto. In a fascinating article on Rome’s Belgian colony in 1977, author Bernice Couey Bishop described his contented life there. His home was a 12- by 15-foot cabin of stone and wood, which he termed his “castle,” surrounded by a wall and terraces of flowers. On the hillside he planted orchards that fed him on pears, apples, peaches, plums and cherries. Inside the cozy home, books of the classics paintings of heroes lined the walls. There he cooked for himself, mainly vegetables and fruits, rice and grits. According to the article, the sounds of his violin often reverberated through the mountainside. Du Drovided vegetables and fruits for the Confederacy…

"Periodically he walked the four miles down the mountain to town where he occasionally accompanied some of the accomplished local pianists on his violin. His character is reflected in letters of advice to his grandsons, whom he urged to follow the example of their father Prosper for honorable careers: “not seeking for…ambitious aims but shaping your course so as to deserve the esteem of your fellow man.” Distinction, he cautioned, “too often converts to vanity…a man can be happy and more so by following a plain, honorable course than by glitter.”

"On a visit to his beloved family 82- year-old Louis walked from Fruitland to downtown Augusta and back on December 6, 1883; he died the next day. Prosper buried him in Summerville Cemetery where he himself would one day rest.

"...Prosper continued to operate the nursery, within a decade shipping catalogs throughout the region, nation and world. He served his profession well, founding the Georgia State Horticultural Society in 1876 and the Richmond County Agricultural Society in 1885, serving as president of each from its establishment until his death. In 1885-1886 he collected horticultural exhibits for the United States government for the New Orleans Exposition and the following year his peers elected him president of the American Pomological Society. For a number of years he presided over the editorial board of the Farmer and Gardener. In 1893 he gave the opening address at the Horticultural Congress held at the Chicago World’s Fair. A generous man, he also donated money and plantings to organizations and institutions such as the state mental institution in Milledgeville.

"In 1897 Prosper’s wife Mary Craig died after more than 40 years of marriage. The next year Prosper, by then more than 70 years old, married 38-year-old Edith Fromm Purdy of New York, the editor of a fashion magazine. They met when he was on a visit to relatives in New York. The couple lived in Augusta and spent summers up North. In fact, in the 1900 census Prosper was enumerated with his new wife in Essex, N.J.

"In November 1910 Prosper J.A. Berckmans died after a long and productive life. At their first conference since the loss of their founder and long-time president, the Georgia State Horticultural Association dismissed their business agenda to pay tribute to their colleague and friend, whom one member said was the “greatest pomologist the South has ever seen.” Professor T. H. Hatten of the University of Georgia, whose campus landscape reflected Berckmans’s expertise, praised not only his “encyclopedic knowledge,” but his character: “His course was not that of the money-accumulating merchant but rather that of altruistic scientist who preferred the good of all before any considerations.” Although he was 80 when he died, Hatten said, “old age of the spirit was never his.”

"In 1903 Prosper had rewritten his will leaving the bulk of the estate, both in New Jersey and Georgia, to his second wife, including all the couple’s horses, carriages and personal belongings, 100 shares of stock in the company and 200 acres of Fruitland, including the dwelling house and the greenhouses of the nursery. The deed, however, was subject to the lease of the nursery portion to P.J. Berckmans and Co. Nursery until 1918. The rest of the estate, including the remaining Fruitland property was left jointly to the three sons, who already had received the largest share of the moneys from their father’s own inheritance of “patrimonial estates in Belgium” in the 1890s. The three brothers continued to run P.J. Berckmans & Company with Louis as president, Robert as vice-president and Allie as secretary-treasurer until the company lease on Edith’s portion ended in 1918 when they left the business.

"In a few years, the new story of the estate as the Augusta National Golf Club began, with Louis and Allie both involved. It is fitting that the Augusta National keeps the name of the Berckmans family alive as a reminder of their remarkable legacy of beauty there and in landscapes throughout the world."

This article appears in the April 2016 issue of Augusta Magazine. by Dr Lee Ann Caldwell of Augusta University
at 4:00 AM