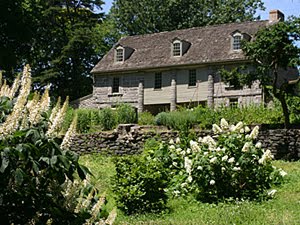 Bartram’s Garden is like a hardy perennial, persisting, even thriving, in the toughest conditions.

It’s a lush 18th century oasis in the midst of an industrial desert. And I’m not exaggerating — there are oil tanks looming right across the river. It’s the oldest botanic garden in the United States, and includes a massive house. Located on the west bank of the Schuylkill River in Philadelphia’s Kingsessing neighborhood, Bartram’s Garden is named for Early American botanist, naturalist, and explorer John Bartram, the original do-it-yourselfer.

“He started out as a farmer, but he had a lifelong interest in plants and medicine. And according to correspondence, he often felt the lack of education,” said Stephanie Phillips, the development director. “And he wrote that if he’d had a better education, he probably would’ve gone into medicine. But not having that, he discovered botany, and decided that he was going to collect all the plants in North America, or perish in the attempt. He was a very determined individual.”

He did neither, but his achievement is still staggering.

“He went as far south as Florida, as far west as the Ohio River, and almost up to Canada. He travelled by foot, by horseback, and also by boat. And he did this in between his farming duties, so it was just a couple of months out of every year.”

Native and exotic plants he and his son William collected, including trees, still grace the property. One is the Franklinia, a flowering tree discovered in Georgia, named for Bartram’s friend Ben Franklin, another self-educated polymath. All of the Franklinias growing today are descended from those collected by the Bartrams; it hasn’t been seen in the wild since 1803.

Then there’s the decidedly un-Quakerish house, which alone is worth the trip.

“It was a rural outpost of Philadelphia, and actually people would approach the garden by river, which is why the river side of the house has this very fancy facade. One of the things he was accomplished at was stone carving and masonry. He created this house over several decades to look a little bit like an Italian villa. He carved the stone out of the Wissahickon Creek; some of the slabs are as long as 17 feet.”

Perhaps the most surprising part of a visit to Bartram’s Garden is this:

“Our grounds are free and open to the public, because we’re part of the City of Philadelphia’s park system. Guided tours are available on the weekends — you can just walk in. They’re available from 10 to 4; it includes a house or a garden tour.”

Best of all is just how alive this historic property feels.

“A lot of people feel this place is magical, and that the views year-round are great, because in the winter is the best time to see the river without all the greenery there.”