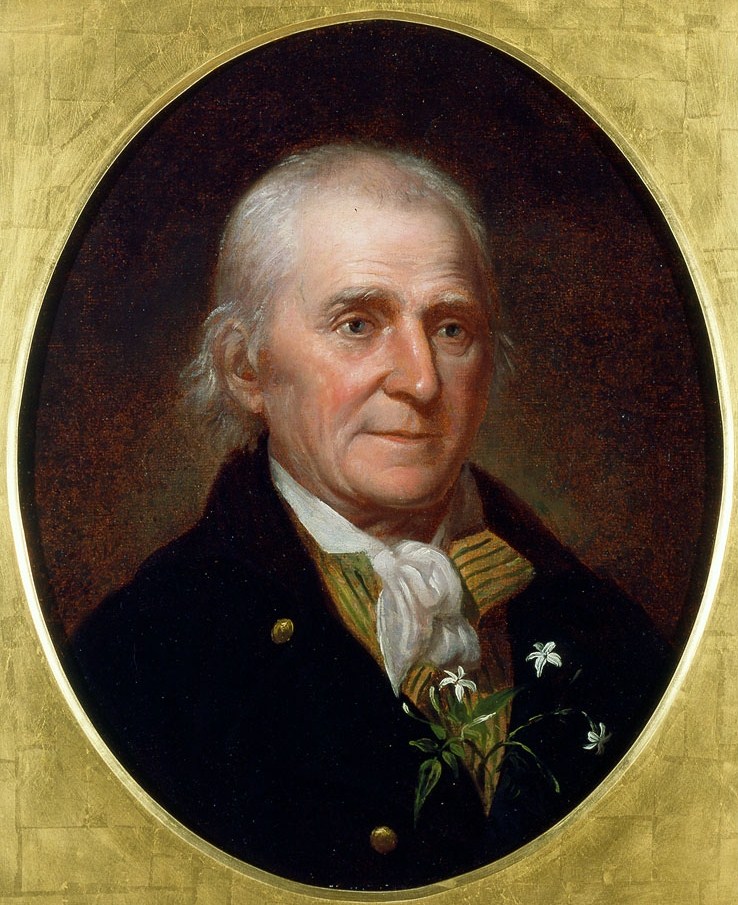 William Bartram, an important American botanist, was a gentle and reclusive Quaker. Refusing appointments to teach botany or to accompany the Lewis and Clark expedition and never attending meetings of the American Philosophical Society, he was happiest with a quiet life of observation and drawing in the woods and in his father's garden. As his father, John Bartram, noted, "Botany and drawing [were] his darling delight." William's lasting fame is based on his richly descriptive account of a solitary journey that he made through the southern colonies in the 1770s, the Travels Through North & South Carolina, Georgia, East & West Florida, which was published in 1791.

Bartram had known Charles Willson Peale for years before Peale painted him for his museum collection in June 1808. One of Peale's most sympathetic likenesses, it reveals the subject's kindly disposition. The portrait represents a noteworthy American man of science, and may also express Peale's great interest in longevity and the achievements of old age, both Bartram's and his own. The flower emerging from Bartram's waistcoat is the fragrant Jasminum officinale, an exotic plant that had been naturalized in Europe for several centuries. It bears a resemblance to the equally fragrant Linnea borealis, a plant discovered by Carl Linnaeus (1707-1778) and reproduced in his 1774 portrait by Alexander Roslin and engravings after it, similarly attached to his lapel. Peale may have intended a visual reference to the great botanist and founder of binomial nomenclature.

This portrait is a complex image that reveals far more than the likeness of a kindly old man. It works on many levels to present Bartram as a man of science, linked to the larger Enlightenment republic of letters, and yet it was also intended to serve as an exemplar of national accomplishment for Peale's museum audience.  The desire to assert a connection with the republic of learning, to participate in the project of the Enlightenment, and to create images that emphasized the scientific life were strong among men of science during the years surrounding the American Revolution.

A little background: Bartram's is America's oldest surviving botanic garden. John Bartram (1699-1777), early American botanist, explorer, & plant collector, began his garden in 1728, when he purchased a 102-acre farm close to Germantown, near Philadelphia in Pennsylvania. Bartram's garden grew into an extensive collection of familiar & intriguing native plants; as he devoted his life to the discovery of examples of new North American species. Bartram's lucrative business centered on the transatlantic transfer of plants.

Bartram died in the midst of the American Revolution; & his sons John Bartram, Jr. (1743–1812) & William Bartram (1739–1823), continued the family's international trade in plants from the beautiful garden. William became a naturalist, artist, & author. Under his influence the garden became an educational center training a new generation of scientific explorers. William’s Travels, published in 1791, chronicled his explorations in America's Southern states.