Its construction took seven years. The magnitude of the project and the length of time it took for it to be completed caused local residents to call the mansion Ridgely's Folly. With 25,000 square feet of living space, it was the largest private home in the U.S., when it was completed in 1790.

Construction of the house began in 1783, and Charles and Rebecca Ridgely began living there late in 1788; but the interior finishing work was not completed until 1790. When the house finally was finished, neighbors reported that Ridgely celebrated by inviting his friends over for a party that included wine, songs & card games; while his wife Rebecca celebrated by holding a prayer meeting in another part of the house. Charles and Rebecca had no children.

Captain Ridgely died 6 months after completing the house at age 56, and left his inheritance to his nephew, Charles Carnan (1760-1829), who took Ridgely as his last name as stipulated in the will. The nephew, a general in the state militia soon became known as General Ridgely and served as the Governor of Maryland between 1816 and 1819. Charles Carnan was married to Priscilla Hill Dorsey (1762-1814), who gave birth to 15 children.

Apparently the builder's widow Rebecca and his nephew Charles Carnan could not get along. To complicate matters further, Rebecca's much younger sister Priscilla was the wife of Carnan. Widow Rebecca wrote her sister,

Now to Acquaint you of some of my troubles, for they are many, in the first place I have given up to Charles Carnan, the Greatest part of my Estate and Now he treats me with the Greatest Disrespect and Slights, tho I have not put my self much in his power, which makes me Glad, tho I have given up all power over him, which make it a great time of trial to me, to be ill used by one I looked on as a Child.

The widow Rebecca left Hampton in 1791, and Charles Carnan Ridgely moved in.

Even before he became governor, General Ridgely was determined that Hampton and its grounds would be a showplace. It was said that, "He had the fortune that enabled him to live like a prince, and he also had the inclination." Ridgely decided to improve the grounds around the house. By 1802, he had formal parterre gardens set on terraced earthworks on the south garden side of the mansion; while on the north entrance facade, he created an English-style landscaped park.

English agricultural writer Richard Parkinson had lived near Baltimore in 1798-1800. He wrote about the area when he returned to England. He noted in his 1805 travel "sketches" that, "The General's lands are very well cultivated…his cattle, sheep, horses, etc., of a superior sort, and in much finer condition than many I saw in America. He is very famous for race horses and usually keeps three or four such horses in training, and what enables him to do this is that he owns very extensive iron works, or otherwise he could not."

At present-day Hampton, a national historical site, a curved approach to the entrance facade winds through level turfed ground, but Ridgely laid out the majority of Hampton’s gardens in a terraced design. Even the entrance facade probably had an avenue of trees, when the mansion was initially built. At the mansion’s garden façade, a turfed area 250 by 150 feet (alternately called the bowling green, the treat terrace, or the south lawn) crowned three additional terraced falls, connected by grass ramps, looking down toward Baltimore, ten miles to the south.

At Hampton & in most Maryland falls gardens, landowners chose to build simple turfed ramps, in place of the stairways familiar in European terraced gardens as well as in a few earlier Virginia falling gardens. Ridgely planned the Hampton’s first garden terrace to come 18 ' below the bowling green; the second dropped a further 6 '; & the third was 4 ' lower than the second. A grass walkway bisected the formal falling garden lengthwise from just below the bowling green to the kitchen garden at the base of their turfed terraces. Many Chesapeake gardeners planted fenced or walled kitchen gardens at the base of their ornamental terraces.

Hampton’s springhouse was similar to others dotting Baltimore’s hillsides. Springhouses, & the cold baths that sometimes accompanied them, needed a constant supply of cool water; the temperature of spring water at its source is normally in the mid-fifties Fahrenheit in the Mid-Atlantic. The cool water would circulate in channels beneath the brick or stone floor level of the well-ventilated building. Often there was little dry floor area, but the largest portion of area was devoted to the spring water channels, in which crocks were placed to cool. At Hampton’s springhouse, the fresh water spring emerged from under a decorative Gothic stone arch, circulated through the container channels, & left through an outlet purposefully made small, to discourage entry by unwanted animals.

A second practical structure on Hampton’s grounds was the icehouse, located on the north side of the mansion. This particular icehouse was, however, more elaborate than most. Hampton’s ice vault was a turf-covered mound with a domed brick ceiling, fieldstone walls, & an underground vaulted passageway. The central cylindrical chamber was almost 34' deep. Ice, cut from nearby ponds in the winter, was packed in straw & stored for use during the heat of summer. Mid-Atlantic milk houses usually had a nearly supply of ice, which was used to harden butter as it was taken from the churn & worked on a slab of cold marble inside the milk house. 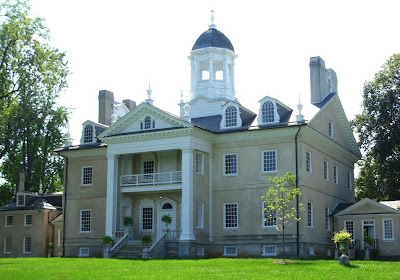 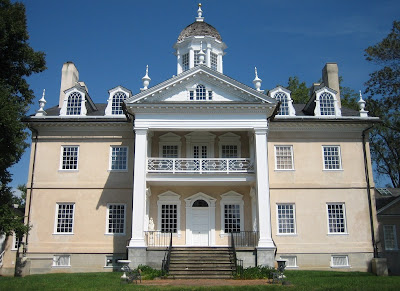 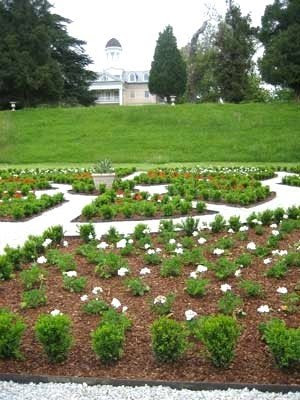 Thanks to Pat Reber for photos.