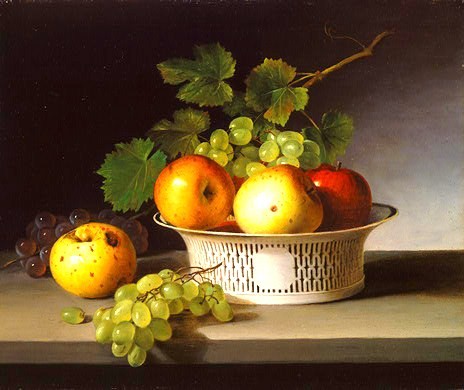 This time of year, when the gardens in our part of the country are just past & the local fruit and vegetable stands are closed, I think of James Peale's still lifes; where he captures forever the Mid-Atlantic freshness, that we are about to lose. 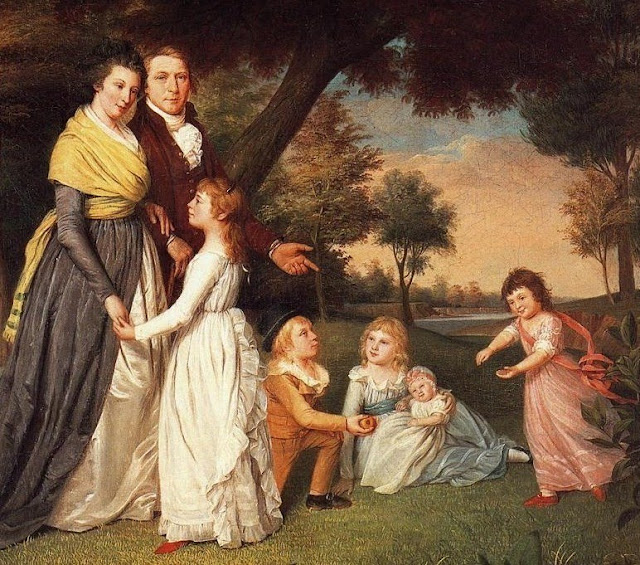 
In 1771, American painter Charles Willson Peale wrote to his London teacher, Pennsylvania expatriate artist Benjamin West, about his youngest sibling Jemmie,the Youngest will be a painter, he coppys very well, and has painted a little from life." James Peale (1749-1831) was 23, and the die was cast.
James Peale (1749-1831). A Porcelain Bowl with Fruit.

James, who lost his father when he was an infant, was raised by his widowed mother & trained by his oldest brother Charles, to be a saddle maker & a painter. Charles Willson Peale had completed his apprenticeship in saddlery in 1762, just as James was reaching the age when a colonial boy might enter his apprenticeship. Charles had married, opened his saddle shop, and then fled creditors for Boston, leaving James to be apprenticed to a cabinetmaker-carpenter in Charlestown, Maryland, in 1765. 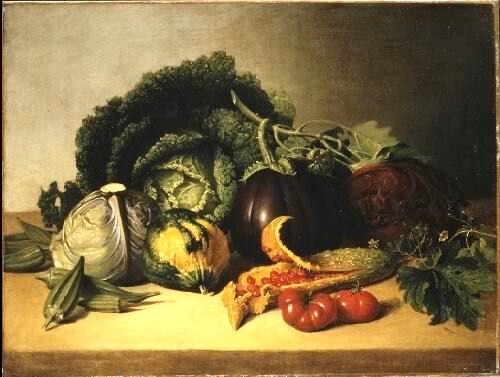 James Peale began working in his brother’s painting studio about 1769, when Charles returned to Annapolis after 2 years of training in London under Benjamin West. James' carpentry skills made him indispensable in making frames for his brother’s paintings. In return Charles gave his brother lessons in keeping a sketchbook for drawing & in painting. 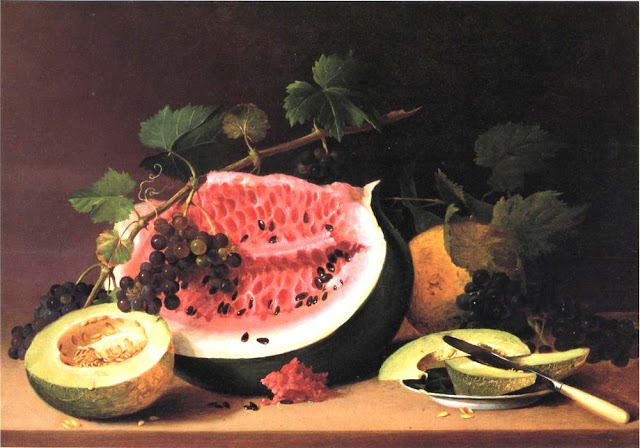 James Peale continued working in his brother’s Annapolis studio; until January 14, 1776, when he accepted a commission as an ensign in the army. Within 3 months he was promoted to captain, and after 3 years in the Revolutionary army, he received a personal letter from George Washington asking him to remain in service.\ 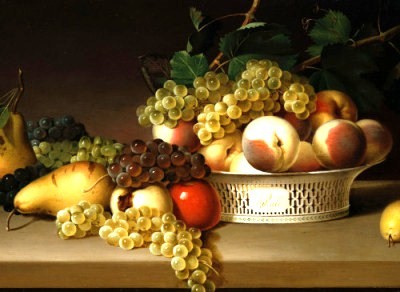 But in 1779, James Peale resigned his commission and moved to Philadelphia. He rejoined his brother Charles, who had moved there with his wife and family, & once again lived & worked in his brother’s studio. James Peale lived with his brother until 1782, when he married Mary Claypoole (1753–1829), sister of artist James Claypoole, Jr. (c 1743–1800). 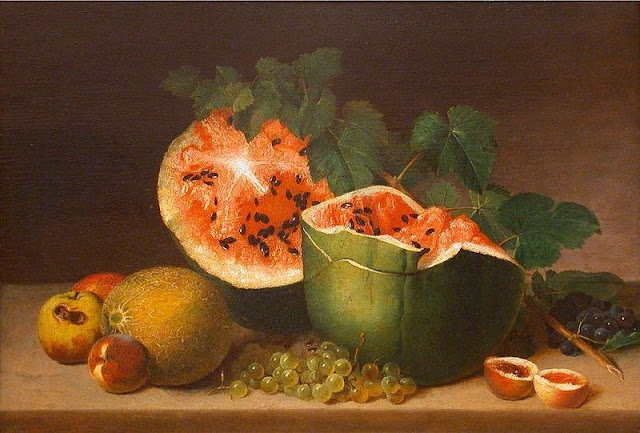 During the 18th century, James continued to make frames for Charles’s oil paintings & began painting his own delicate miniature portraits as well as landscapes dotted with people, especially his family members. The brothers worked together painting & on a variety of projects such as making floats for the 1788 Federal Procession, the grand parade held in Philadelphia to commemorate the new United States Constitution. And the brothers worked apart developing their own distinctive styles & projects. 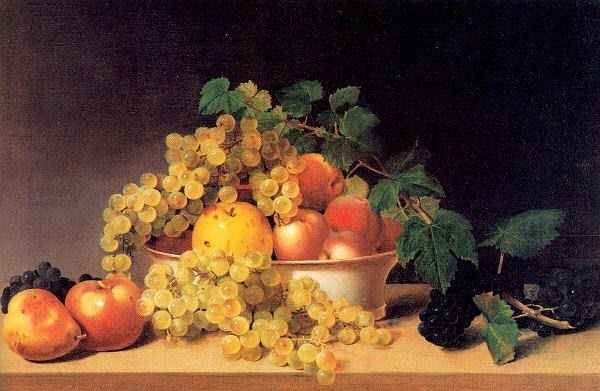 By the turn of the century, James began painting successful history paintings & exquisite neoclassical fruit still-life paintings. He continued to paint ivory miniatures, until his eyesight began to fail about 1820. Toward the end of his life, James Peale explored the romantic sublime in landscapes including thunderstorms, violently uprooted trees, & grand mountains. 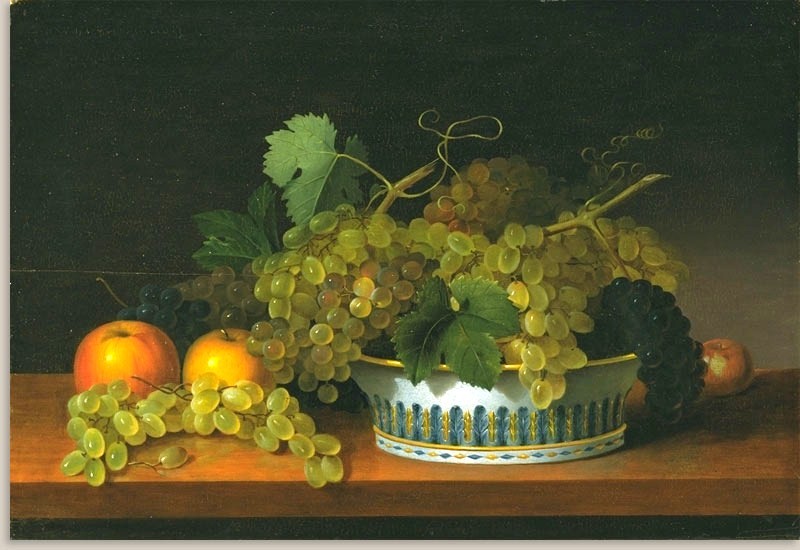 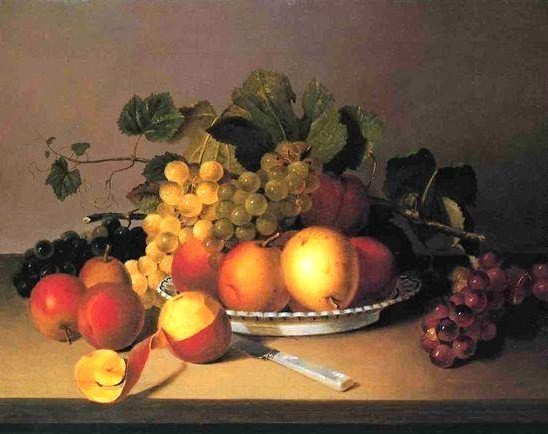 James Peale painted miniatures, portraits, & historical paintings in his early career when he was working with his brother Charles Willson Peale. 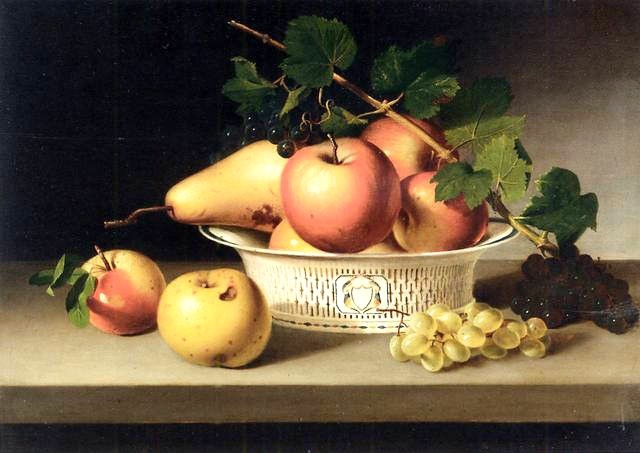 By the turn of the century, he began to explore still lifes & landscapes on his own. These are the still lifes from that period. 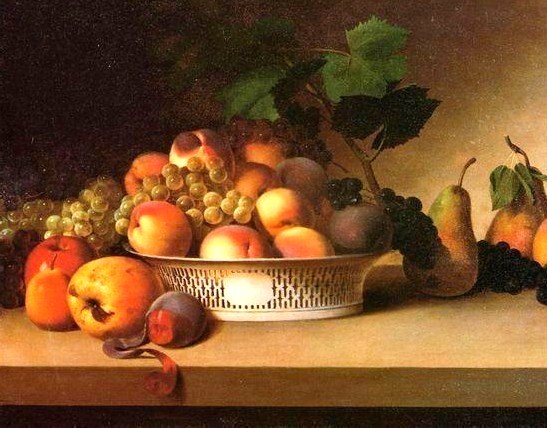 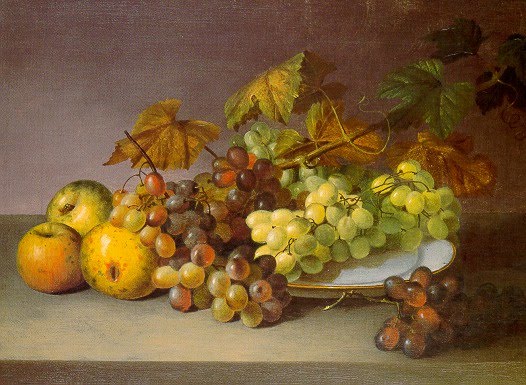 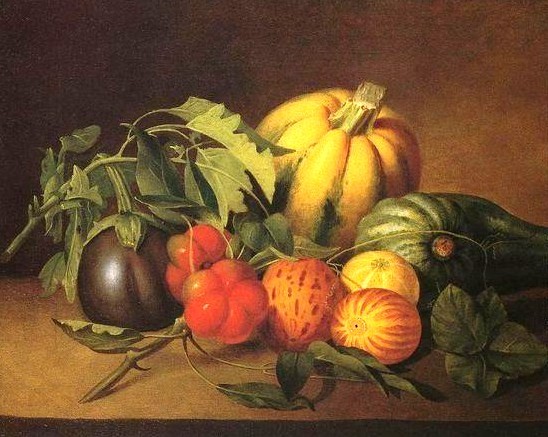