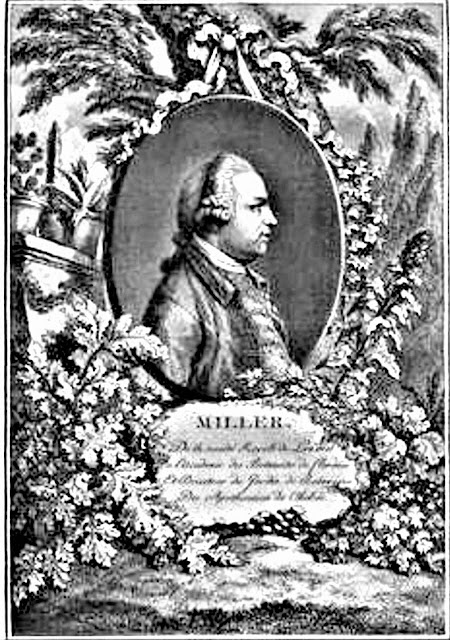 The practical English gardener, author, and experimental horticulturalist Philip Miller was the curator of Chelsea Physic Garden. Miller learned his profession in the paternalistic pattern so familiar in the 18th century. He worked in his father's market garden before becoming a florist in Pimlico. On leaving school young Miller assisted his father but soon went on his own as a florist, garden planner, and nurseryman specializing in ornamental shrubs. Hans Sloan noticed his work, and he soon was asked to assist the foreman of the botanic garden at Chelsea. In 1722, Miller was appointed curator of the Physic Garden of the London Apothecaries at Chelsea, where he served for 48 years.

The Chelsea garden under his direction attained an international reputation boosted by his various publications, especially The Gardeners Dictionary. Carl von Linne (Linnaeus), the great Swedish botanist and organizer, made several visits to the Physic Garden in the 1730s, meeting with the garden's curator Philip Miller.

Miller's Dictionary went into 8 updated editions to 1768 , with the 7th edition of 1756 including the new nomenclature details of Linnaeus; it was translated into several European languages.

Because he became so well known, Miller received propagation material from around the world and his practical and experimental work earned him an unparalleled horticultural reputation. He became famous throughout Europe for all of the plants sent from North America, which he grew at the garden. He redistributed many of his horticultural successes throughout Europe and America. Miller remained at the Physic Garden, until he was nearly 80, finally retiring on 6 February 1771 .

Chelsea Physic Garden still exists today as one of Britain's oldest botanical gardens, a unique piece of living history with a collection of more than 5,000 medicinal and unusual plants. Over 30,000 people visit the 4 acre site each year.

The first physic garden was established in Italy in 1543, and the Chelsea Physic Garden was planted in London in 1673. Only the physic garden in Oxford preceded it in England. The 4 acre Chelsea site sat on the banks of the River Thames.

The Chelsea Physic Garden was founded as the Apothecaries' Garden, with the purpose of training apprentices in identifying plants. The location was chosen as the proximity to the river created a warmer microclimate allowing the survival of many non-native plants during harsh British winters. The river was also important as a transportation route facilitating easy movements of both plants and botanists.

In 1722, Dr. Hans Sloane, Lord of the Manor, after whom the nearby locations of Sloane Square and Sloane Street were named, purchased the Manor of Chelsea from Charles Cheyne. This purchase of about 4 acres was leased to the Society of Apothecaries for £5 a year in perpetuity. That amount is still paid each year to the heirs of that owner, Dr. Hans Sloane.

I know this blog is about American gardens, but I just can't resist including photos of the Chelsea garden which had so much influence on colonial gardens. The lovely little garden, which sits smack in the middle of busy London, is a beautiful, fragrant retreat from the near frantic bustle of the 21st century clattering around it. 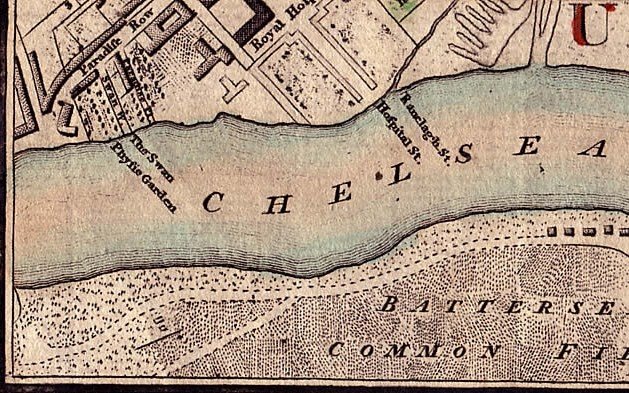 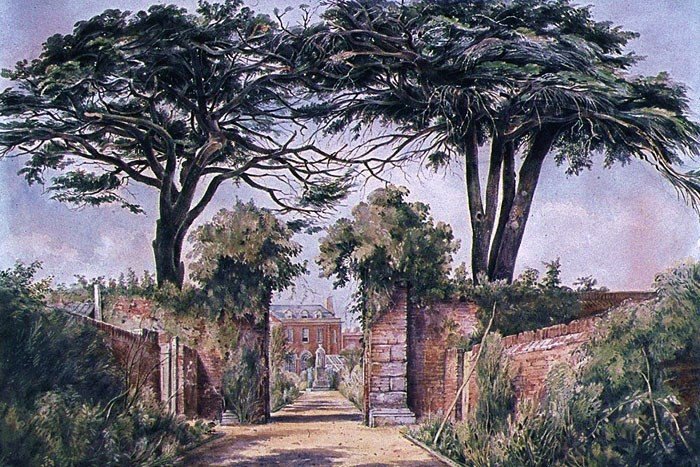 19th Century view of London's Chelsea Physic Garden from the south showing the famous cedars of Lebanon planted here in 1683. They were among the first to be planted in England. The last cedar died in 1903. 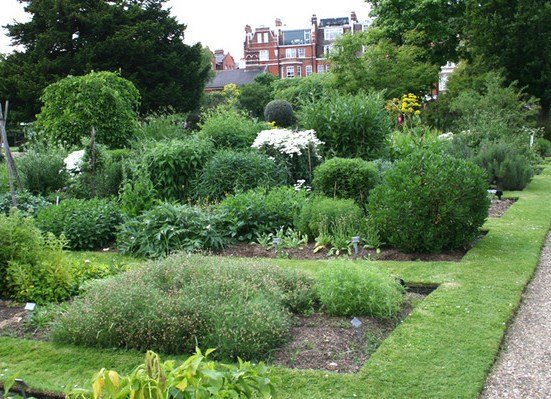 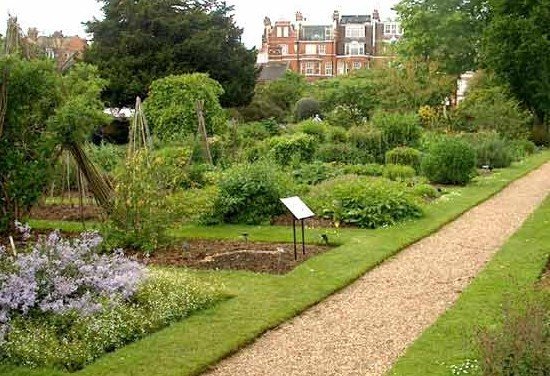 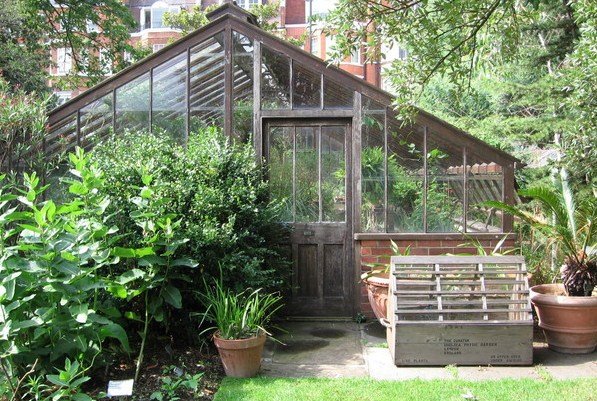 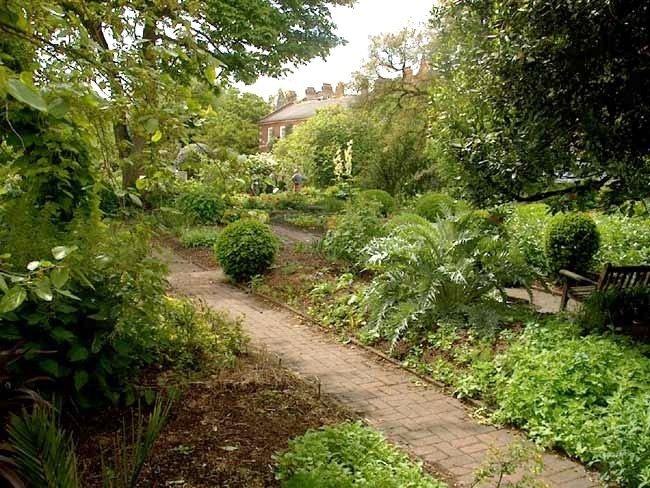 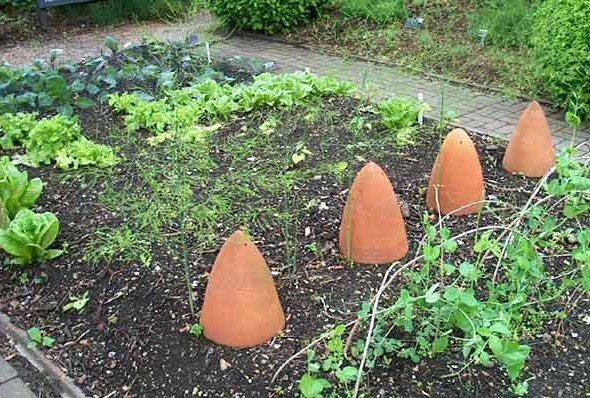 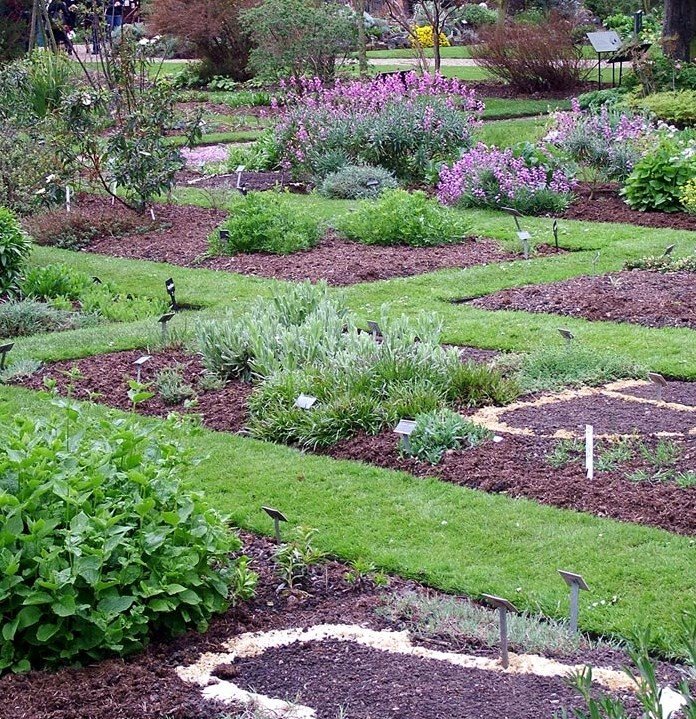 21st Century photo of Chelsea Physic Garden in London.
at 4:00 AM