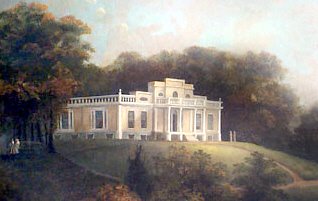 Just south of Brooklyn and overlooking the river is a small chain of hills, on which are the country houses of many wealthy New Yorkers. Its proximity to New York leads New Yorkers to rent the houses and send their families there during the hot season. The men go to New York in the morning, and return to Brooklyn after the Stock Exchange closes. "The elevated situation of these country residences, in addition to being healthy, gives them the advantage of a charming view which includes New York and the nearby islands, principally Governor's Island, and is constantly enlivened by the passing of the boats which ply on both rivers. 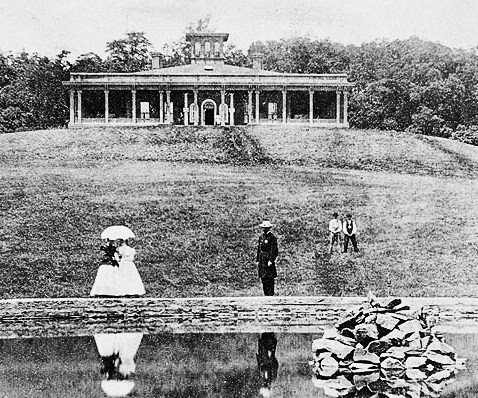 Photo of Druid Hill Later in the 19th Century

Because Druid Hill did not sit directly on the harbor basin in Baltimore, an artificial lake was built on the grounds. Gentry sometimes created a man-made body of water in their pleasure grounds near their dwelling affording recreation, food, ice, and beauty.

In 1806, Rosalie Steir Calvert wrote to her father in Europe from her estate Riversdale in Prince George's County, Maryland. She had been consulting with architect artist William Birch about the design of their grounds.

Birch drew us a plan for the grounds. He thinks an artificial lake would be better on the south of the house than on the north, since the terrain is better adapted and it would be easier to make there.

Two years later she wrote to her father, Lake just finished, which looks like a large river on the southern side, gives a very beautiful effect and furnishes us at the same time with fish and ice for our ice-house.
at 4:00 AM