.
Family Garden Helpers
Surprisingly, landed gentry & small town merchants & artisans generally employed the same kinds of help in the garden during the latter half of the 18th century in the Mid-Atlantic & Upper South. (That region usually includes Delaware, Maryland, New Jersey, Pennsylvania, Washington DC, & Virginia; but my research seldom is all-inclusive for the entire area.)

While there are not many records of exactly who was working in the garden during the growing season, there are a few. Hard-working Annapolis craftsman William Faris used apprenticed & indentured white servants, free & slave blacks, & his own family to maintain his Annapolis garden. Here the use of garden labor between the artisan & the gentry differed.

At the homes of the gentry, the family seldom helped with garden tasks, except that the wives usually managed the daily activities of the kitchen garden and the poultry yard, as well as daily tasks of the house staff.

All of craftsman Faris' children, who were living close to home between 1792 & 1804, (when Faris was recording daily in his diary) helped in the garden, usually assisting a slave or temporary hired help.

Faris’ unmarried sons still living in Annapolis, who had apprenticed under their father before going out on their own as professional clockmakers & silversmiths, continued to serve as occasional garden labor for their aging father, who was 64 years old in 1792. One son was 27, & the other was 23 in 1792. 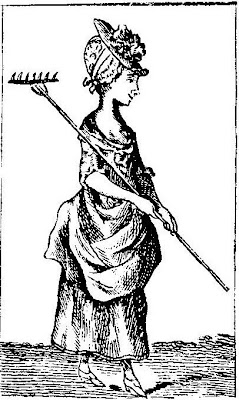 The craftsman’s unmarried daughters all helped in the garden, until they left home. Faris first mentioned his youngest daughter’s helping in the garden in 1794, when she was fifteen. His two oldest daughters, unmarried & heavily into the Annapolis social scene, also assisted in Faris’s garden in 1799, when the eldest was 25 & her sister was 24.

Notation of garden work by Faris’s wife, Priscilla, appears only once. In his diary Faris noted that she was usually employed at “woman’s work.” She fed & sewed clothing for her family & helped Faris with his need for extra hands by raising a large family.

British agriculturalist Richard Parkinson & his family rented a farm in Baltimore County for several years at the end of the century before returning to England, where he wrote of his American experiences. Parkinson also noted that his children helped with gardening & farming chores but that his wife did not.
at 4:00 AM