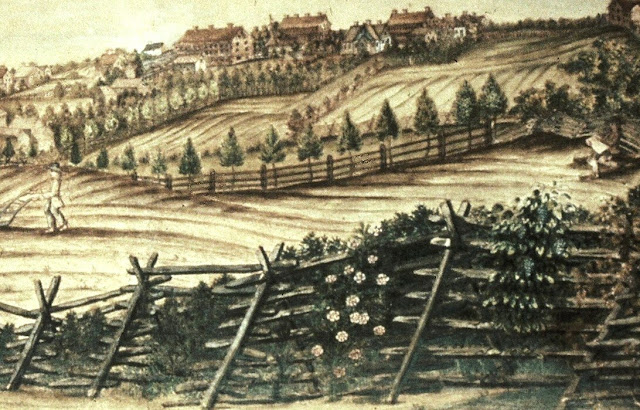 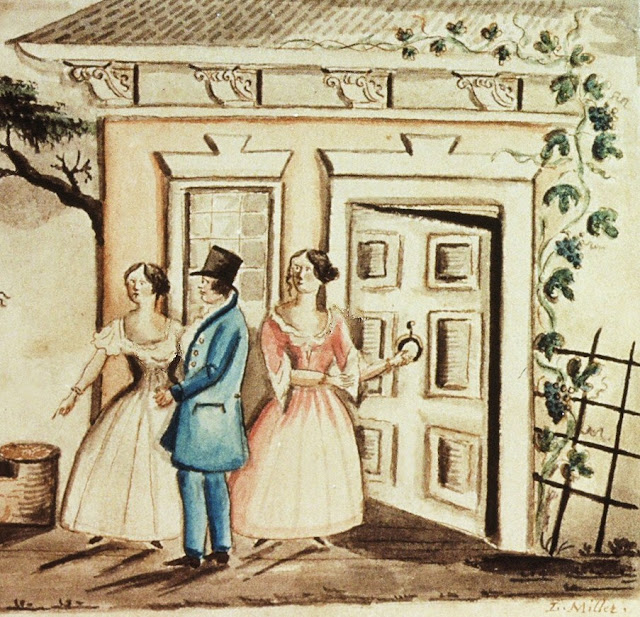 During the 18th century, American gardeners trained vines to grow on wooden fences, brick walls, columns, dwellings, arbors, and outbuildings. Vines are plants with supple stems that can climb, trail, or creep which need some support to grow erect. Some are rambling, some twining, and some sprawling. 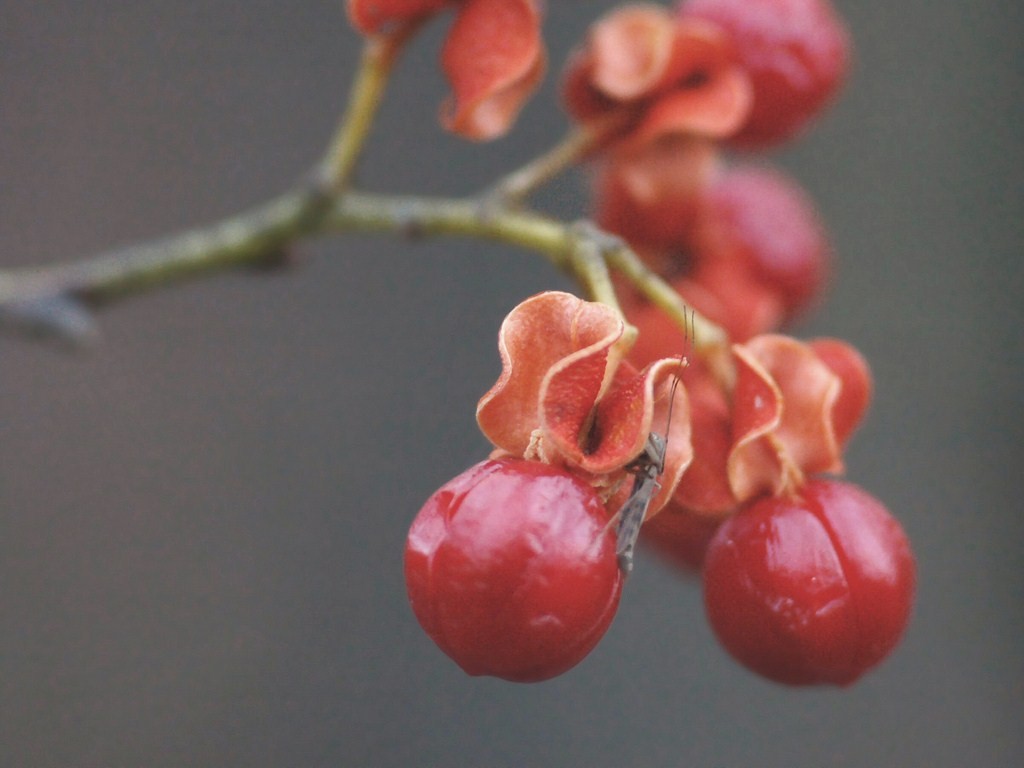 Trained climbing vines could supply early American gardeners with some edibles; dramatic decoration; cooling shade; food to attract songbirds; some privacy; & lingering fragrances as well as softening the lines of buildings & screening undesirable views. Fast-growing plants, like the Carolina Trumpet Vine, could offer a relatively quick solution to hide an unsightly area. Climbing vines could break up stiff horizontal and vertical lines. And most of the vines could be found in the surrounding woods. 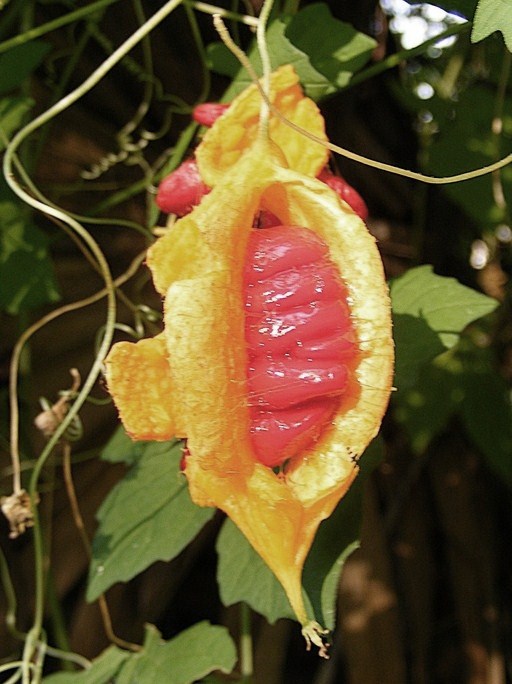 Among the hardy vines in early American gardens were the Carolina Trumpet Vine (Campsis radicans), Dutchman's Pipe (Aristolochia macrophylla), Virgin's Bower (Celmatis virginiana), honeysuckles, and rambling roses like sweetbriars, treasured for both their fragrant leaves & flowers. The orange, red, & yellow flowers of the Trumpet Honeysuckles (Lonicera sempervirens) are an excellent source of nectar for hummingbirds. 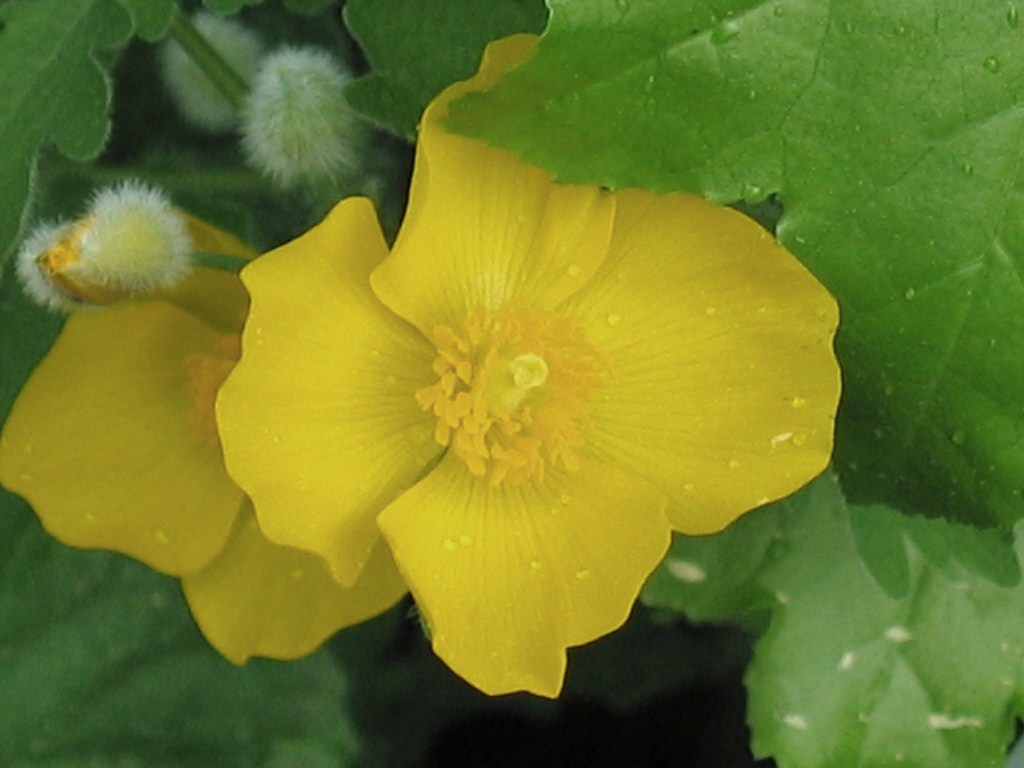 Thomas Jefferson grew the lush purple Hyacinth Bean (Dolihos lablab) as well as Scarlet Runner Beans (Phaseolus coccineus). He called the wonderfully scented Snail Flower or the Caracalla Bean (Vigna caracalla) with its twining stalk, "The most beautiful bean in the world." Philip Miller's 1768 edition of The Gardener's Dictionary noted that in Europe, "the inhabitants plant it to cover arbours and seats in gardens for which it is greatly esteemed...for its beautiful sweet smelling flowers."
Carolina Trumpet Vine (Campsis radicans)

Jefferson also grew the Nasturtium (Tropaeloum majus) as both a vegetable & an ornament in 1782. In Bernard M'Mahon's 1806 American Gardener's Calendar, he recommended the Balsam Apple (Momordica balsamina) as a tender annual flower of the "twining sort." Balsam Apple has lobed, glossy-green leaves, delicate tendrils, and soft pale-yellow flowers. But the resulting fruits are anything but delicate spikey yellow-green pods which turn a bright yellow-orange before bursting open with sticky bright red seeds. Jefferson tried this vine in his gardens, along with the Cypress Vine (Ipomoea quamoclit), the seeds of which he sent Patsy to grow indoors at Monticello in 1790. 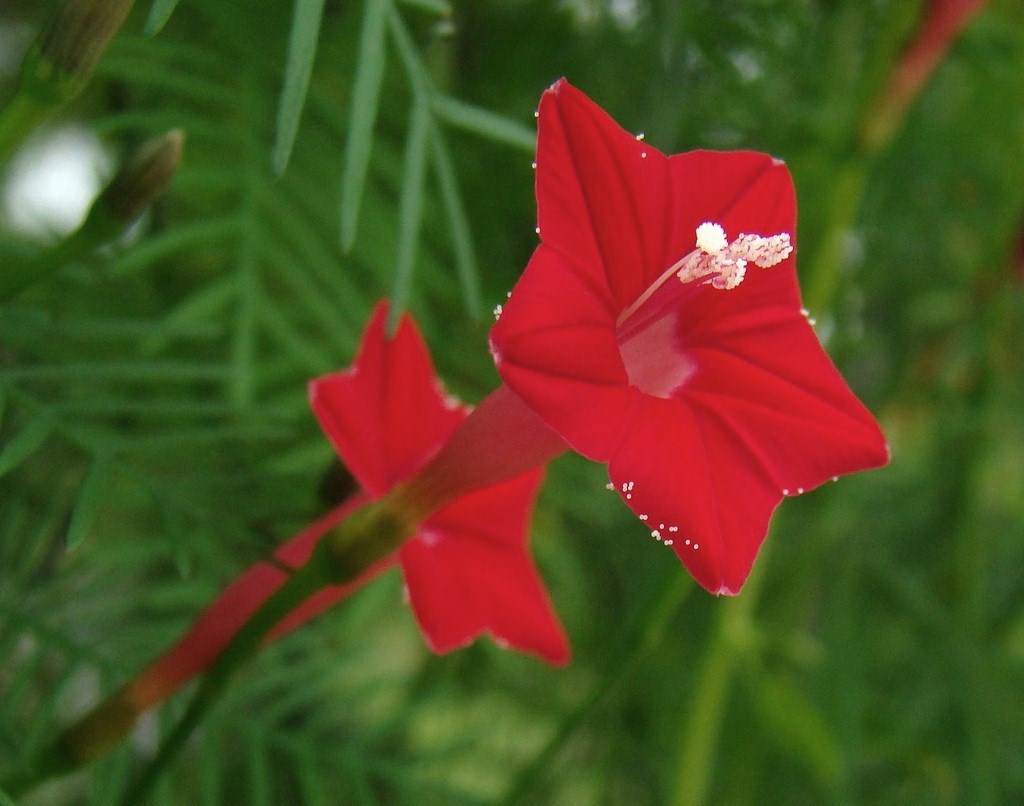 My favorite from the period is the Carolina Trumpet Vine. Its 3-inch-long tubular, horn-like, orange flowers are an amazing, defiant show of color blooming throughout the summer. For some garden visitors direct contact with the vine can result in skin irritation. I also enjoy the Carolina Jessamine (Gelsemium sempervirens) which keeps it shiny dark green leaves year-round & shows vivid yellow blossoms. A shrubby, vine of moderate growth, jessamine climbs by twining its stem around a supporting structure. The fragrant, tubular, yellow flowers form in clusters during the early spring. 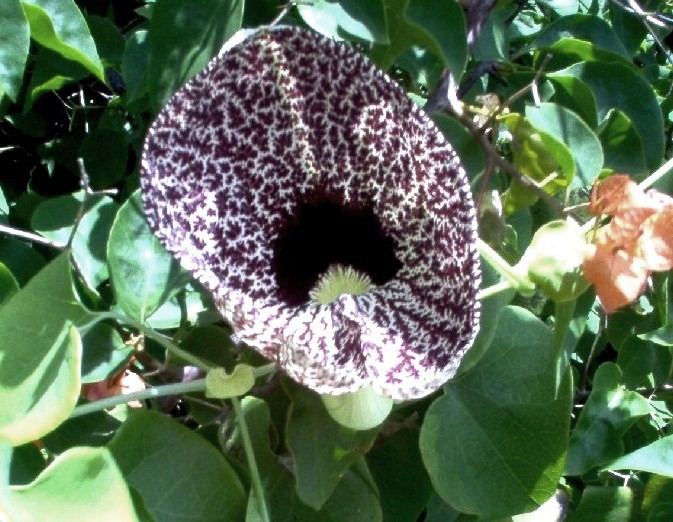 Also used in early gardens was American Bittersweet (Celastrus scandens) whose orange & red berry-like fruits & seeds of are showy and provide winter food for wildlife. The leaves are glossy dark green, oval shaped, and turn yellow before dropping in the fall. Native American Bittersweet vine is often confused with the invasive, weedy pest Oriental Bittersweet, which appears to be reducing the number of American Bittersweet plants. 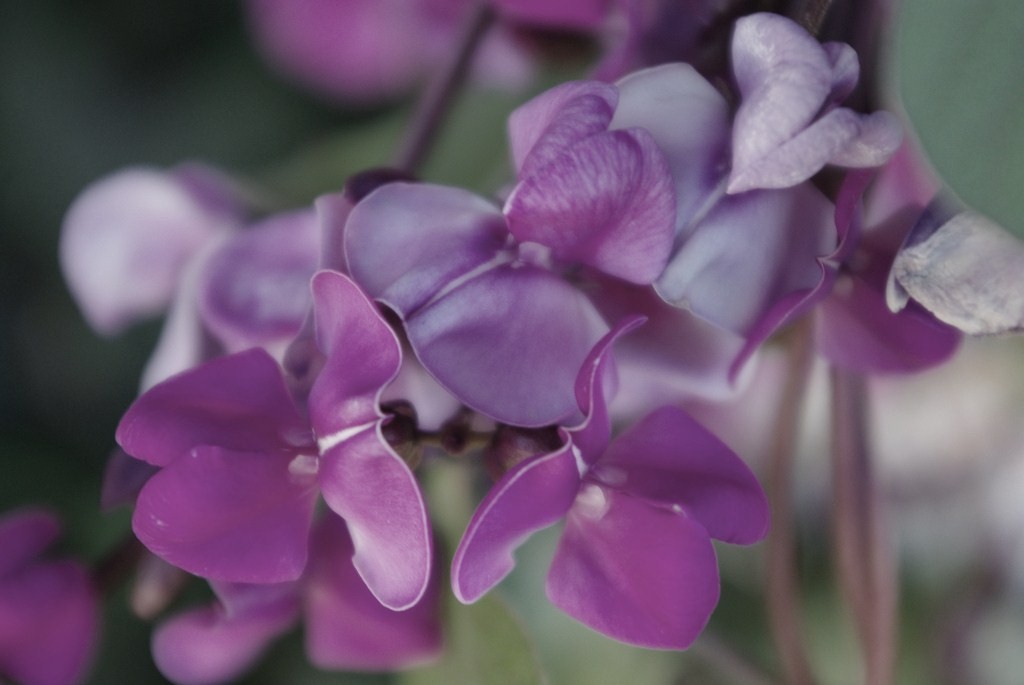 Hyacinth Bean (Dolihos lablab)
Some theorize that vines were not much used as ornaments in gardens in the colonial & early republic periods of our county's history. Gardens during the 18th-century Age of Reason are thought to be too orderly to tolerate vines. The 19th century would bring in the passionate, vine-filled, romantic garden. But, early American gardeners were intentionally planting vines on their grounds long before the Romantic period. 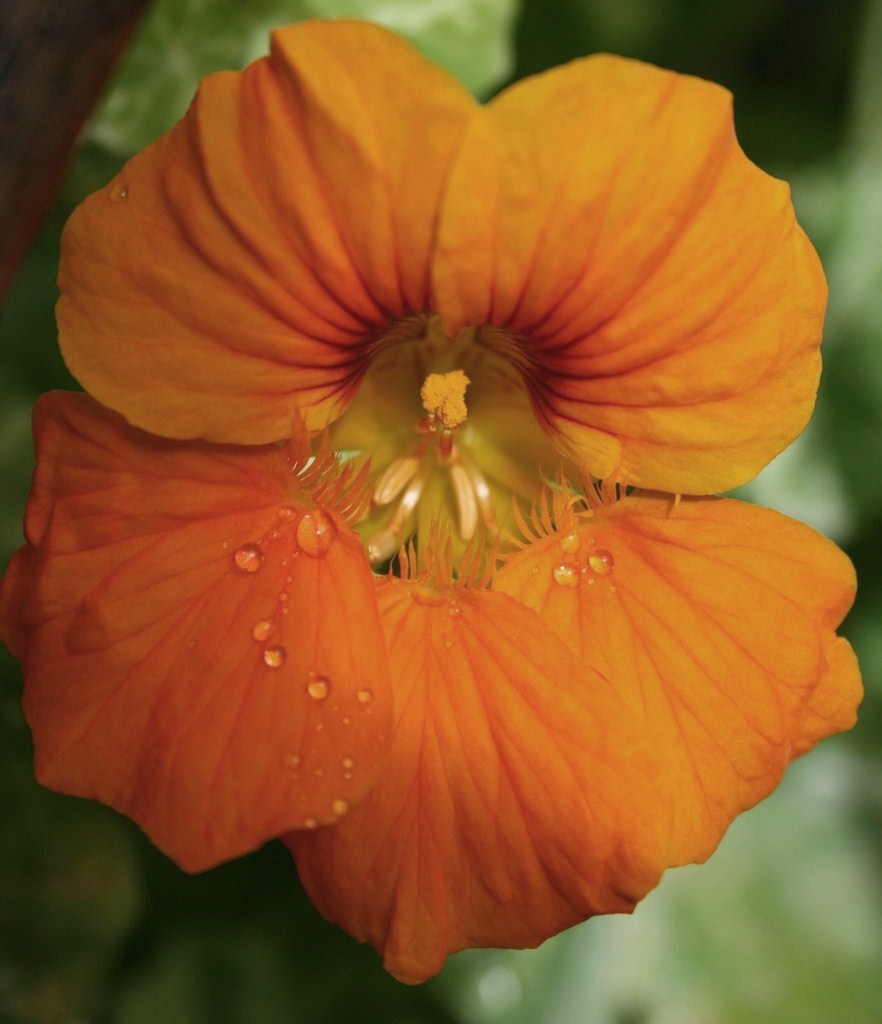 Nasturtium (Tropaeloum majus)
Early in the 18th century, Robert Beverley reported in in History and Present State of Virginia about the garden at Westover, "Have you pleasure in a Garden?....Colonel Byrd, in his Garden, which is the finest in that Country, has a Summer-House set round with the Indian Honey-Suckle..." 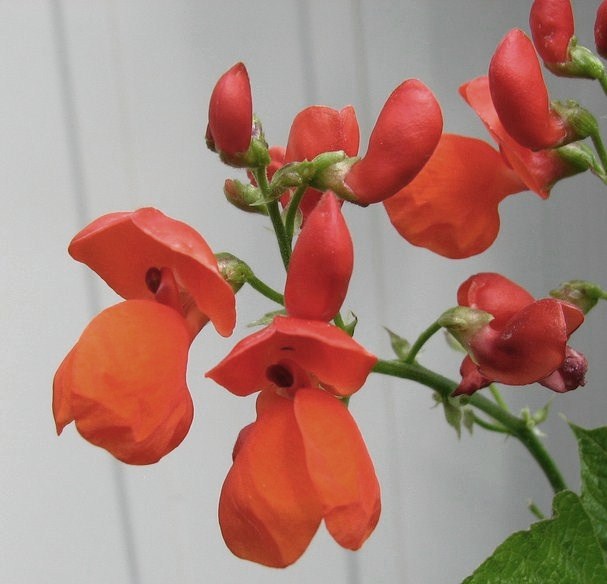 In 1743, Eliza Lucas Pinckney wrote of William Middleton's Crow-field in South Carolina, "The house stands a mile from, but in sight of the road...as you draw nearer new beauties discover themselves, first the fruitful Vine mantleing up the wall loaded with delicious Clusters..." 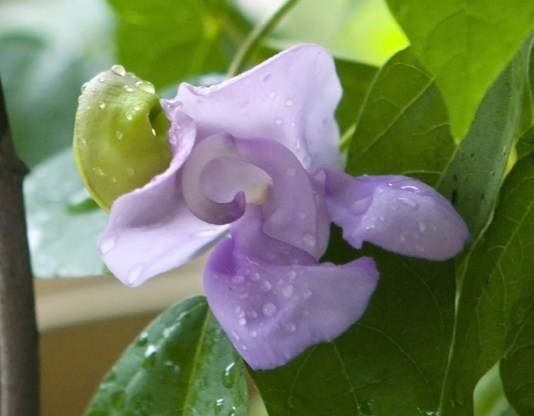 George Washington seemed to enjoy planting vines to soften the look of his covered walkways at Mount Vernon in Virginia. In March of 1785, he noted, "Planted the Scarlet or French honey suckle...at each Column of my covered ways, as also against the circular walls between the Store house." 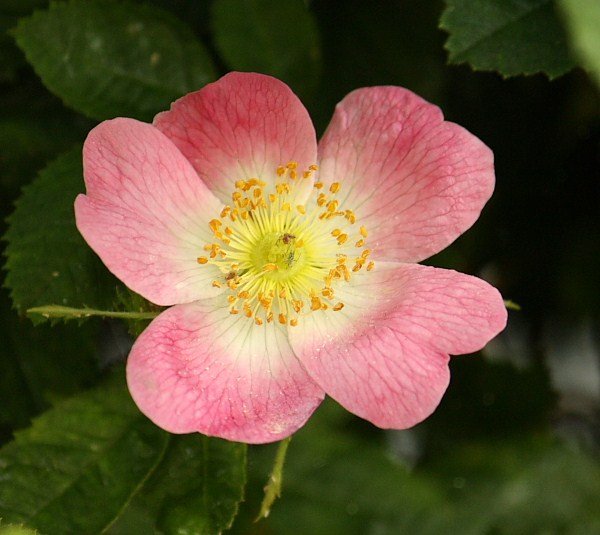 When Manasseh Cutler visited the public pleasure grounds in 1787, Gray's Garden near Philadelphia, Pennsylvania, he wrote, "At every end, side, and corner, there were summer-houses, arbors covered with vines or flowers or shady bowers encircled with trees and flowering shrubs, each of which was formed in a different taste." 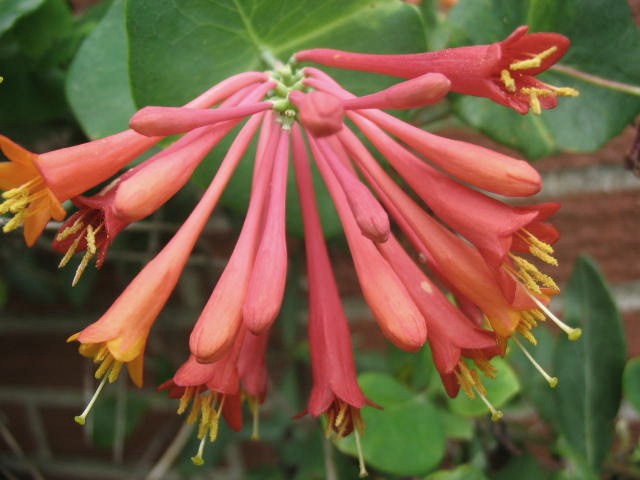 Francois Jean Marquis De Chastellux visited Westover many years after Beverley in 1782, noting, "As for the hummingbirds...the walls of the garden and the house were covered with honeysuckle, which afforded an ample harvest for these charming little animals." 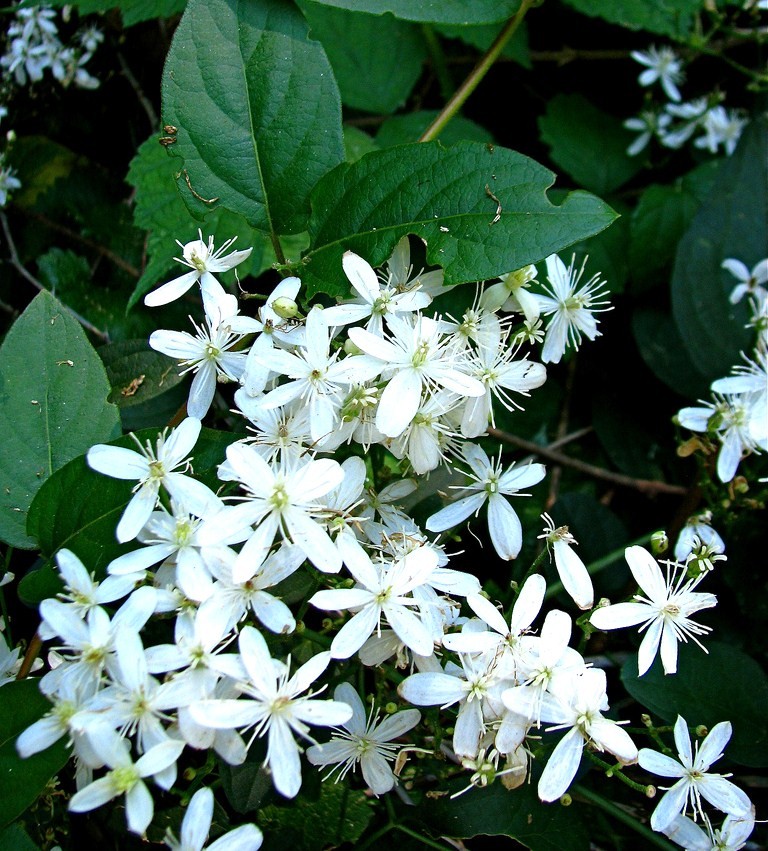 Several years after planting his honeysuckle vines, George Washington wrote, "I desire that the honey suckles against the Houses and brick walls, may be nailed up and made to spread regularly over them. Should those near the Pillars of the Colanades, or covered ways, be dead, their plants should be supplied with others; as I want them to run up, and Spread over the parts which are painted green." Washington apparently liked the sweet smell of his honeysuckle vines and did not worry about the vine's affect on his wooden columns. Here was a man known to like the tried and true; and his fragrant, familiar honeysuckle provided him with that comfort.