A grove is a small woods or cluster of trees either occuring naturally & intentionally left in the landscape or purposefully planted in the pleasure grounds around a dwelling in the 18th century. Often a grove consisted of large trees whose branches shaded the ground below affoding shade or forming avenues or walks. Groves produced food attracting songbirds to delight visitors.

Some groves of trees were planted for remembrance honoring a passed friend or relative. Groves were often seen as solemn, whether intentionally planted as a memorial or not. 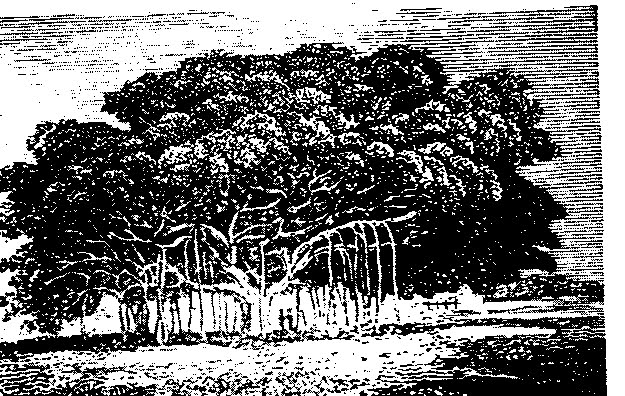 Eliza Lucas Pinckney wrote in a letter in 1742, from Charleston, South Carolina, "You may wonder how I could in this gay season think of planting a Cedar grove, which rather reflects an Autumnal gloom and solemnity than the freshness and gayty of spring. But so it is...I intend then to connect in my grove the solemnity (not the solidity) of summer or autumn with the cheerfulness and pleasures of spring, for it shall be filled with all kind of flowers, as well wild as Garden flowers, with seats of Camomoil and here and there a fruit tree--oranges, nectrons, Plumbs."

In June of 1743, Isaac Norris II at Fairhill near Philadelphia, Pennsylvania, was planning on, "...opening my woods into groves, enlarging my fishponds and beautifying my springs."

A 1761 house-for-sale ad in the Pennsylvania Gazette touted, "A small Grove of Pine Trees before the Garden, from which you are entertained with a most beautiful Prospect of the City of Philadelphia, and of the River, for 4 or 5 Miles downwards; so that no Ship can pass or repass, but by hailing her. you may easily know from whence she came, or wither she is going."

George Ogilivie wrote of the 1770s grounds at Alexander Garden's Otranto near Charleston, South Carolina,
"There midst the grove, with unassuming guise
But rural neatness, see the mansion rise!"

At the beginning of the American Revolution, General George Washington wrote a letter in August 19 1776, to Lund Washington, who remained at his home Mount Vernon in Virginia, "I mean to have groves of Trees at each end of the dwelling House ...these Trees to be Planted without any order to regularity (but pretty thick, as they can at any time be thin'd) and to consist that at the North end, of locusts altogether. and that at the South, of all the clever kind of Trees (especially flowering ones) that can be got, such as Crab apple, Poplar, Dogwood, Sasafras, Laurel, Willow...to be interspersed here and there with every greens such as Holly, Pine, and Cedar, also Ivy; to these may be added the Wild flowering Shrubs of the larger kind, such as the fringe Trees." 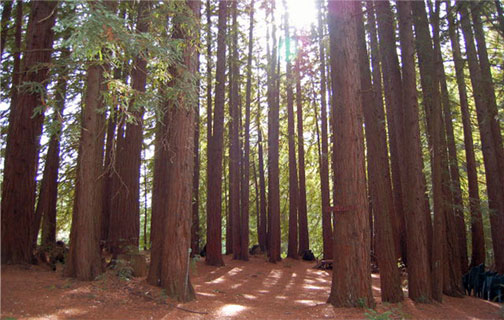 Washington was back at Mount Vernon, after the war had concluded and before he assumed the presidency. In March of 1785, he wrote in his diary, "Transplanted in the groves at the ends of the House...9 live Oak, 11 Yew or Hemlock, 10 Aspen, 4 Magnolia, 2 Elm, 2 Papaw, 2 Lilacs, 3 Fringe, 1 Swamp berry."

Reverend Manasseh Cutler wrote in 1787 of the trees on the mall in Philadelphia, "The trees are yet small, but most judiciously arranged. The...small groves in the squares have a most delightful effect."

Abigail Adams, wife of John Adams, wrote in 1790 of the grounds at Bush Hill in Philadelphia, Pennsylvania, "A beautiful grove behind the house, through which there is a spacious gravel walk, guarded by a number of marble statues."

When visiting the Moravian settlement of Salem, North Carolina in May of 1791, William Loughton Smith noted, "The church yard is on a hill above the town, surrounded by shady groves."

In 1791, Rev. William Bentley wrote of the garden of Joseph Barrell, a Boston merchant, "His garden is beyond any example I have seen. A young grove is growing the background, in the middle of which is a pond, decorated with four ships at anchor, and a marble figure in the centre."

George Washington's tree plantings had grown enough by 1796, that Benjamin Henry Latrobe wrote of them on his visit to Mount Vernon, Virginia, "The house becomes visible between two groves of trees at about a mile's distance." Just after George Washington's death, Mount Vernon was described in the Pennsylvania Gazette in 1800. "On either wing is a thick grove of different flowering forest trees. Parallel with them, on the land side, are two spacious gardens, into which one is led by two serpentine gravel walks, planted with weeping willows and shady shrubs."

In 1798, Timothy Dwight wrote of Boston, Massachusettes, "Boston, enjoys a superiority to all other great towns on this continent...the gardening superior to what is found in most other places; the orchards, groves, and forests, numerous and thrifty."

In a house for sale ad in the Federal Gazette in 1800, the grounds of Adrian Valeck's country seat in Baltimore, Maryland, were described, "Behind the garden in a grove and shrubbery or bosquet planted with a great variety of the finest forest trees, oderiferous & other flowering shrubs etc."

When Manasseh Cutler visited the Woodlands in Philadelphia, Pennsylvania, in November of 1803, he wrote, "We then walked over the pleasure grounds...lawns of green grass, frequently mowed, and at different distances numerous copse of trees, interspersed with artificial groves, which are of trees collected from all parts of the world." 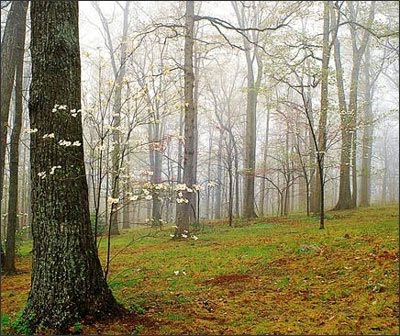 Grove of Trees at Monticello.

In 1803, Alexander Hamilton's garden contained, "A few dogwood trees, not large, scattered along the margin of the grove would be very pleasant."

In 1807, Thomas Jefferson made notes for his Virginia home of Monticello, "The canvas at large must be a Grove, of the largest trees, (poplar, oak, elm, maple, ash, hickory, chestnut, Linden, Weymouth pine, sycamore) trimmed very high, so as to give the appearance of open ground, yet not so far apart but that they may cover the ground with close shade."

Artist Charles Willson Peale wrote to his son Rembrandt Peale in 1810 from Philadelphia, Pennsylvania, "I am often pleased with the solemn groves skirting my meadows in majestic silence and cool appearance."

New Yorker John Nicholson emphasized the practical use of a grove in The Farmer's Assistant in 1820, "These are both ornamental and useful. To plant heights of ground, the sides and tops of which are generally not very good for tillage or pasture, adds much to the beauty of a landscape; and is at the same time highly useful, as it regards the quantities of firewood which may be produced from such spots...Sugarmaple-trees, planted round the borders of meadows, and some straggling ones in them, are very pleasant and profitable, as they do no injury to the growth of the grass. Wherever trees can be planted in pastures and along fences, without doing injury to the growths of the adjoining fields by their shade, this part of rural economy ought never to be omited."
at 4:00 AM