.
A bosket or bosquet is a plantation of trees in a landscaped ground, garden, or park. The term comes from the Italian bosco meaning grove or wood. The term is seldom used before 1820, in early America.

To encourage visitors to walk inside bosquets, in Europe they are traditionally paved with gravel, since maintaining grass under trees is usually difficult.

At Versailles the bosquets are defined by geometrical paths and many contain sculptures & fountains hidden in the trees to surprise the garden visitor. These arrangements of trees are often planted as a quincunx and appear as a formal outdoor room. A bosquet offers both shade from the sun and a chance to see the sunlit spaces of gardens & grounds from shade.

As they mature, the trees of the bosquet form an interlacing and cooling, shady canopy overhead. Trees forming the bosquet are frequently limbed-up to reveal the intriguing and artistic textures and patterns of the tree trunks.

Occasionally, in order to keep the bosquet a defined garden area, perimeter trees were pleached. Pleaching (or plashing) is the practice of bending and inter-twining plants. Pleached trees grow together to form a sort of hedge on stilts.

In Philip Miller's Gardener's Dictionary of 1737, he defines bosquets as "small Compartments of Gardens...form'd of Trees, Shrubs, or tall large growing plants." 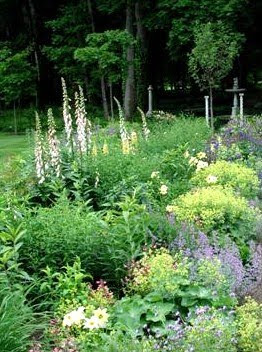 Garden with a Wooded Bosquet Beyond.

In an 1800 Baltimore, Maryland newspaper advertisement in the Federal Gazette, Adrian Valeck's country seat is describes as having "a large garden in the highest state of cultivation, laid out in numerous and convenient walks and squares bordered with espaliers, on which...the greatest variety of fruit trees, the choicest fruits from the best nurseries in this country and Europe have been attentively and successfully cultivated...Behind the garden is a grove and shrubbery or bosquet planted with a great variety of the finest forest trees, oderiferous & other flowering shrubs etc."
.
at 4:00 AM