In an 18th century pleasure ground or garden, a bower was a shelter or covered place in a garden, overarched with branches of trees, shrubs, or other plants. A bower made with boughs of trees or vines bent and twined together served as a shady recess from the sun.

William Shakespeare referred to a 1596 bower in 1 Henry IV, "Ditties...Sung by a faire Queene in a Summers Bowre."

In 1667, John Milton wrote, "Where the unpierc't shade Imbound the noontide Bowrs."
Richard Bradley warned in his Dictionary in 1727, "Care must be had that you do not confound the Word Bower with Arbour, because the first is always built long and arch'd, whereas the second is either round or square at Bottom, and has a sort of Dome or Ceiling at the Top." 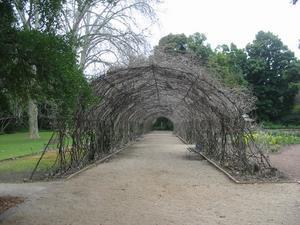 In 1776, while traveling in western North Carolina and perhaps a little homesick, William Bartram wrote of "companies of young, innocent Cherokee virgins, some busily gathering the rich fragrant fruit, others having already filled their baskets, lay reclined under the shade of floriferous and fragrant native bowers of Magnolia, Azalea, Philadelphus, perfumed Calycanthus, sweet Yellow Jessamine and cerulian Glycine frutescens."

In the new republic of the United States of America in 1787, Manasseh Cutler described Gray's Garden near Philadelphia, Pennsylvania, "At every end, side, and corner, there were summer-houses, arbors covered with vines or flowers or shady bowers encircled with trees and flowering shrubs, each of which was formed in a different taste."

The Viginia Argus advertised a house for sale in the summer of 1799, in Bowling Green, Virginia:
"Valuable Property FOR SALE at the Bowling Green, near Richmond, that much frequented Tavern and public Garden...The garden is very extensive...with Summer Houses, and bowers for the accomodation of company."

When planning the landscaping for Monticello in 1804, Thomas Jefferson declared, "The kitchen garden is not the place for ornaments...bowers and treillages suit that better."

In his 1806 Gardener's Calendar, Philadelphian Bernard M'Mahon described where to place buildings in the garden, "Various light ornamental buildings and erections are introduced as ornaments to particular departments; such as temples, bowers, banqueting houses...and other edifices ...usually erected...in openings between the division of the ground, and contiguous to the terminations of grand walks." 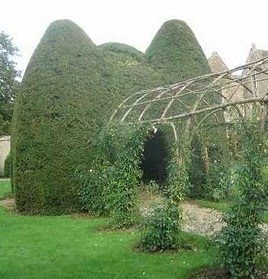 In Salem, North Carolina, Juliana Margaret Conner descriped an 1827 visit to the Moravian community, "Afterwards walked into the garden...we saw what I conceived to be a curiosity and in itself extremely beautiful. It was a large summer house formed of eight cedar trees planted in a circle, the tops whilst young were chained together in the center forming a cone. The immense brances were all cut, so that there was not a leaf, the outside is beautifully trimmed perfectly even and very thick within, were seats placed around and doors or openings were cut, through the branches, it had been planted 40 years."
at 4:00 AM