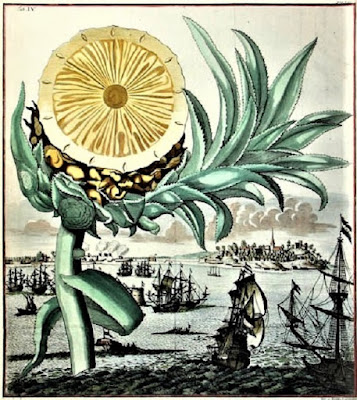 Pineapple c1708-1714
Some of Maryland’s convict gardeners had practiced the gardening trade before arriving in the colonies, & one possessed an unusual knowledge of sophisticated gardening techniques.  One convict gardener brought pineapples & the structure of the pinery to Maryland before the American Revolution.  He served Charles Carroll (1723-1783) the Barrister who was an American lawyer from Annapolis, Maryland.  The Barrister built his country seat called Mount Clare near Baltimore in 1760.  He was a delegate to the Second Continental Congress in 1776 & 1777.

In January of 1768, Charles Carroll the Barrister wrote to his English agents, “I am in want of a Gardener that understands a Kitchen Garden…Grafting, Budding, Inoculating & the Management of an orchard & Fruit Trees…under Indenture for four or five years…There come in Gardeners in every Branch from Scotland at Six pounds a year.”

The requested servant arrived at Mount Clare later that year & was apparently well-respected by the Barrister & his fellow gentry, even though he was a convict. When the Barrister's cousin Charles Carroll of Carrollton bought a gardener for his father at the docks in Baltimore, he asked the Barrister’s convict gardener to interview the new immigrant & then wrote his father, “I have bought a new gardiner from Captain Frost. I gave 23 pounds currency for him; he is not about 21 years of age, appears to be healthy & stout & orderly; he says he understands a kitchen garden pretty well; Mr. Carroll’s gardener examined him: he has 4 years to serve.”

The Barrister’s convict gardener may have been a good judge of men, but he did have a few negative qualities. Five years into the man’s indenture, the exasperated Carroll placed & advertisement in the Maryland Gazette on May 6,1773: “TEN POUNDS REWARD…Ran away…a convict servant man, names John Adam Smith…by trade a gardener; has with him…a treatise of raising the pineapple, which he pretends is of his own writing, talks much of his trade & loves liquor.”

The issue of the treatise is an interesting one. In October 1770, Mary Ambler of Jamestown, Virginia, had visited Mount Clare & noted in her diary, “at the Garden…he is now building a Pinery where the Gardr expects to raise about an 100 Pine Apples a Year He expects to Ripen some next Sumer.”

It is remarkable that convict gardener Smith talked with Mary Ambler about pineapples in 1770, & had a treatise on the fruit with him in Maryland. The pineapple’s popularity had grown in England, creating a demand for publications giving directions for its culture. James Justice’s plan for a pineapple stove was published in The Scots Gardeners’ Director, 1754.   John Giles (1726-97) published a monograph on the plant in England in 1767.  Since the Barrister’s convict gardener arrived in the colonies in 1768, his claim to have written his own treatise is intriguing, because he built a functioning pinery in the British American colonies by the 1770s. 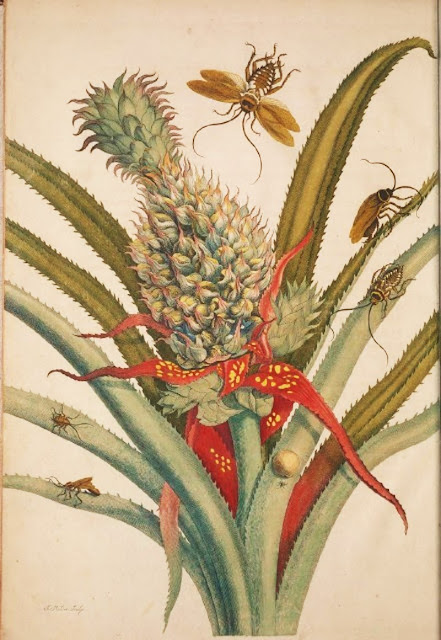 What is the history of pineapple cultivation in Europe & Britain?

A fine article at BuildingConseration.com written by Johanna Lausen-Higgins here surveys the history of pineapple cultivation in England.  She writes,  "Christopher Columbus first encountered the pineapple in 1493, unleashing a flurry of attempts to convey its exotic flavor to uninitiated Europeans. The superlatives & majestic comparisons continued long after. In a work of 1640, John Parkinson, Royal Botanist to Charles I, described the pineapple as: "Scaly like an Artichoke at the first view, but more like to a cone of the Pine tree, which we call a pineapple for the forme... being so sweete in smell... tasting... as if Wine, Rosewater & Sugar were mixed together." (Theatrum Botanicum)

"Parkinson wrote those words before the pineapple had even reached the shores of Britain. Its introduction to Europe resulted in a veritable mania for growing pineapples & parading them at the dinner table became a fashion requisite of 18th century nobility..

"Pineapples originate from the Orinoco basin in South America, but before their introduction to Europe, the date of which is uncertain, they were distributed throughout the tropics. Later, this led to some confusion about their origin. The Gardener’s Dictionary of 1759 by Philip Miller, for example, gives the origin of the pineapple as Africa...

"European pineapple cultivation was pioneered in the Netherlands. The early success of Dutch growers was a reflection of the trade monopoly the Netherlands enjoyed in the Caribbean in the form of the Dutch West India Company, established in 1621. As a result, plant stock could be imported directly from the West Indies in the form of seeds, suckers & crowns, from which the first plants were propagated...

"Dutch methods of pineapple growing became the blueprint for cultivation in Britain, undoubtedly endorsed after the Glorious Revolution of 1688 cemented Anglo-Dutch relations. William Bentinck, close adviser of William III, is thought to have shipped the entire stock of Caspar Fagel’s pineapple plants over to Hampton Court in 1692. The fruits were, however, ripened from this stock of mature plants & therefore did not count as British-grown pineapples. Pineapples had been ripened in this way before, as commemorated in Hendrik Danckerts’ painting of 1675 depicting Charles II being presented with a pineapple by John Rose, gardener to the Duchess of Cleveland. Danckerts’ painting led to the common misconception that Rose was the first to grow a pineapple in Britain.
1670s Hendrick Danckerts (Dutch artist, 1625-1689)  Gardener John Rose presenting a pineapple to King Charles II

What was Marylander Charles Carroll the Barrister's Pinery and how did it work?

A continuation of  Johanna Lausen-Higgins's article:  "The first reliable crop of pineapples in Britain was in fact achieved by a Dutch grower, Henry Telende, gardener to Matthew Decker, at his seat in Richmond between 1714 & 1716. Decker commissioned a painting in 1720 to celebrate this feat & this time the pineapple takes pride of place as the sole object of admiration. From this point on the craze for growing them developed into a full-blown pineapple mania...

"The appearance of innovations seems to follow no clear chronological order. Early attempts at cultivation were made in orangeries, which had been designed to provide frost protection for citrus fruit during the winter months. Orangeries, however, did not provide enough heat & light for the tropical pineapple, which grew all year round. Heating in glasshouses during the mid 17th century was provided by furnaces placed within the structure, but fumes often damaged or killed the plants. Hot-air flues were then devised, which dissipated heat slowly through winding flues built into cavity walls. These "fire walls" were heated by hot air rising from furnaces or stoves & required constant stoking with coal. This was a dangerous method & many early "pineries," as they later became known, burned down when the inevitable accumulation of soot & debris within the flues caught fire...
1720 Theodorus Netscher (Dutch artist, 1661-1732) Pineapple Grown in Matthew Decker's Garden at Richmond, Surrey

A continuation of  Johanna Lausen-Higgins's article:  "Henry Telende’s method of pineapple cultivation was published in Richard Bradley’s A General Treatise of Husbandry & Gardening in 1721. Telende grew the young plants, called "succession plants," in large cold frames called tan pits. The fruiting plants would subsequently be moved into the stove or hothouse to benefit from the additional heat provided by the hot-air flues.

"The tan pits were lined with pebbles at the bottom followed by a layer of manure & then topped with a layer of tanners’ bark into which the pots were plunged. The last of these elements was the most important. Tanners’ bark (oak bark soaked in water & used in leather tanning) fermented slowly, steadily producing a constant temperature of 25ºC-30ºC for two to three months & a further two if stirred. Manure alone was inferior, in that it heated violently at first but cooled more quickly. Stable bottom heat is essential for pineapple cultivation & tanners’ bark provided the first reliable source...

"James Justice, a principal clerk at the Court of Sessions at Edinburgh, was also a talented amateur gardener. On his estate at Crichton he developed an incredibly efficient glasshouse in which he combined the bark pits for succession & fruiting plants under one roof. (Justice published a very elegant drawing of it in The Scots Gardiners’ Director in 1754.) In a letter to Philip Miller & other members of the Royal Society in 1728, he proudly announces: "I have eight of the Ananas in fine fruit." The letter makes Justice the first documented gardener to have grown pineapples successfully in Scotland... 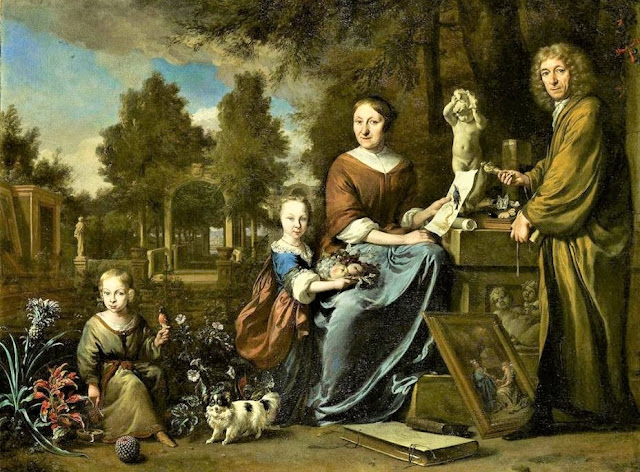 Agnes Block and her garden Flora Batava at Vijverhof by Jan Weenix. Youngest daughter has the pineapples.

A continuation of  Johanna Lausen-Higgins's article:  "An interesting variant growing structure was the pinery-vinery, first proposed by Thomas Hitt in 1757. Here, vines created a canopy for an understorey of pineapples. The vines would have been planted, as was customary in vineries, outside, & fed into the structure through small open arches built into the low brick wall. A fervent admirer of this method was William Speechly, gardener to the third Duke of Portland, & grandson of William Bentinck, who had sent the first batch of pineapples to Britain in 1692.  Portland inherited Welbeck Abbey in Nottinghamshire in 1762, & his passion for growing pineapples nearly ruined him. Nevertheless, he sent Speechly to Holland like many before him to study all the latest techniques. Speechly published his now greatly refined methods in A Treatise on the Culture of the Pineapple & the Management of the Hot-house in 1779"... 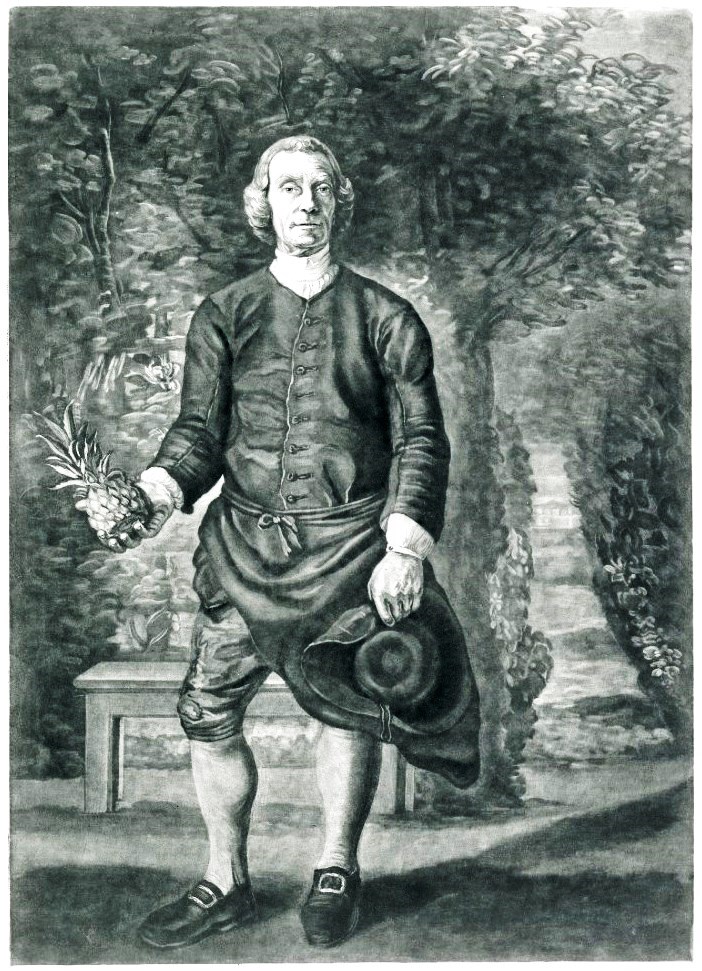 "Although Philip Miller & John Abercrombie extolled the virtues of tanners’ bark while lamenting the flaws of manure, many structures that used dung as a heating method were devised into the mid 19th century.  Adam Taylor wrote a tract titled A Treatise on the Ananas or Pine-apple in 1769 in which the use of horse manure was promoted, probably for the first time, as a method of heating a pineapple pit."
at 4:00 AM