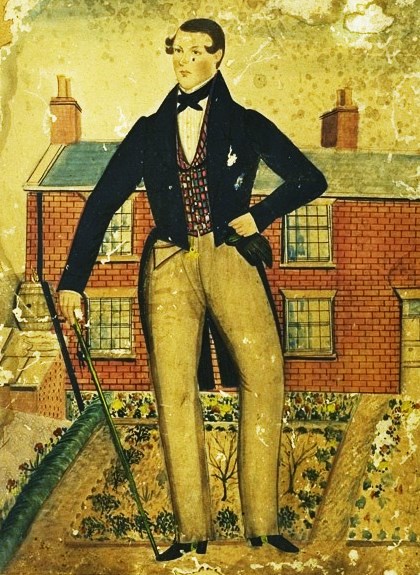 Jacob Maentel (1763-1863) was born in Germany & immigrated to the U.S. around 1805-6. Some report that Johann Adam Bernhard Jacob Maentel was born in the 1770s in Kassel, Germany, son of Frederich Ludwig Maentel & Elizabeth Krügerin. He may have immigrated to Baltimore, Maryland, sometime between his father’s death in 1805, & the appearance of a Jacob Maentel, “Portrait painter,” in the Baltimore directory of 1807, where he advertised for portrait commissions.
Jacob Maentel made his living as a portrait painter, first in Maryland and then in Lebanon, York and Dauphin Counties in Pennsylvania. He painted more than 200 portraits of friends & neighbors. Although the first image in this posting is the only painting of a formal garden we know of by Maentel, the artist often painted his subjects in outdoor settings.

Most landscapes the artist used in his portraits were farms or nature's choice.  Maentel was probably traveling as an itinerant artist up to Pennsylvania by about 1807, based on portraits of subjects in Dauphin, Lebanon, & York Counties. He traveled north of Baltimore about 50 miles, & applied for citizenship at York, PA, where a large German-speaking immigrant population thrived.  From September 1, 1814, to March 1, 1815, “Jacob Mantell” of Lancaster served in the Second Regiment of the Second Brigade of the Pennsylvania Militia based in York. He was paid $6.00 for this service & was
naturalized a short time later, in York County.

In 1816, Maentel was sketched by artist Lewis Miller of York County, PA.  Another second, older Jacob Maentel, identified as a confectioner, was also sketched at the same time.  Following his marriage in 1819, Maentel settled in Lebanon County, PA. He married Catherine Weaver of Baltimore in about 1818 or 1819, & had a daughter Louisa, born c. 1822; 4 more children followed.  Over the next 2 decades, the artist produced numerous portraits of local residents, many of them German Americans.

In 1820, Maentel is listed in the census for Dauphin County, PA, where he painted many subjects standing in grassy landscapes. By 1830, he was living in Schaefferstown, Lebanon County, PA, where 2 of his children were born & where his name appears with many of his subjects—Zimmerman, Bucher, Haak—in the parish register of the Saint Luke’s Evangelical Lutheran Church. The Jacob Maentel name also appears, until 1833, in the Zimmerman ledger books for purchases of paint & confectioners’ supplies.

According to one of Maentel's granddaughters, Maentel & his family were bound for Texas in 1838, when illness forced them to stop in the vicinity of New Harmony, Indiana; where they stayed with their friends, the Jacob Schnee family. Maentel apparently went on to Texas, leaving his family with the Schnees. When Maentel returned from Texas & decided to stay in Indiana, Schnee helped him lease a farm.  In 1838, Maentel is listed in the Indiana tax rolls for New Harmony Township, where he continued to sketch members of the tight-knit German community, some of whom he had known in Pennsylvania. The German community there grew from the 1st attempt at a utopian society in New Harmony.

New Harmony, Indiana, is a small town located on the Wabash River in southwestern Indiana. During the early part of the 19C, New Harmony was the site of 2 attempts to establish Utopian communities.  The 1st, Harmonie (1814-1825), was founded by the Harmonie Society, a group of Separatists from the German Lutheran Church. Led by their charismatic leader Johann Georg Rapp, they left their home in Harmonie, Pennsylvania, & established a 2nd community on the western frontier of Indiana.  During the 10 years in which they cultivated the new town of Harmonie, the Harmonists, with their strong German work ethic & devout religious rule.  The Harmonists combined the Swabian work ethic "Work, work, work! Save, save, save!" with the Benedictine rule "Pray & work!". This resulted in an unheard of economic achievement that was recognized as "the wonder of the west."  Slightly more than a decade later, however, they sold the town & surrounding lands to Robert Owen, a Welsh-born industrialist & philosopher, for his communitarian experiment. The Owenite social experiment was an economic failure just 2 years after it began.

As late as 1850, Maentel continued to work as an itinerant portrait painter in Indiana & Illinois. The older Maentel also appeared in Indiana, after the artist was settled there, where there were also references to the artist’s wife as a confectioner.  Apparently some of the portraits Maentel painted of local residents were done in exchange for goods. In 1858, his house burned to the ground, & he moved in with his daughter Louisa & her husband Thomas Mumford. Jacob Maentel died in 1863, & is buried in Maple Hill Cemetery, in New Harmony, Indiana, where his initials, J.M. are recorded on the gravestone.
at 4:00 AM