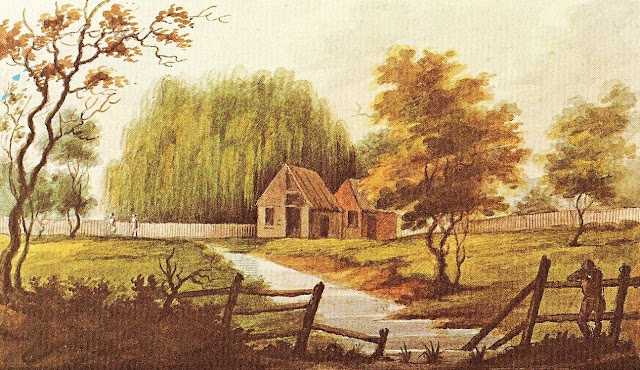 Charles Fraser (1782-1860)  A View Near Charleston , 1801, Where St. Paul's Church Now Stands, Ratcliffe Lands.
South Carolina artist Charles Fraser (1782-1860) painted some watercolors of the landscapes he saw around him in the late 18C & early 19C. He depicts broad swipes of landscapes allowing the viewer to see the buildings in the ground planned around them. The watercolors of Charles Fraser allow us feel the South Carolina landscape around us as we learn how it was being groomed & planted or simply not planted. Thanks to South Carolina native Fraser, we have a chance to see, through his eyes, the homes & gardens there as he was growing up. Although he was primarily known his miniature portraits, he also created watercolors of historical sites, homes, & landscapes. He painted while working as a lawyer, historian, writer, & politician. Today, many of Fraser's works are displayed at the Carolina Art Association & the Gibbes Art Gallery in Charleston, South Carolina. 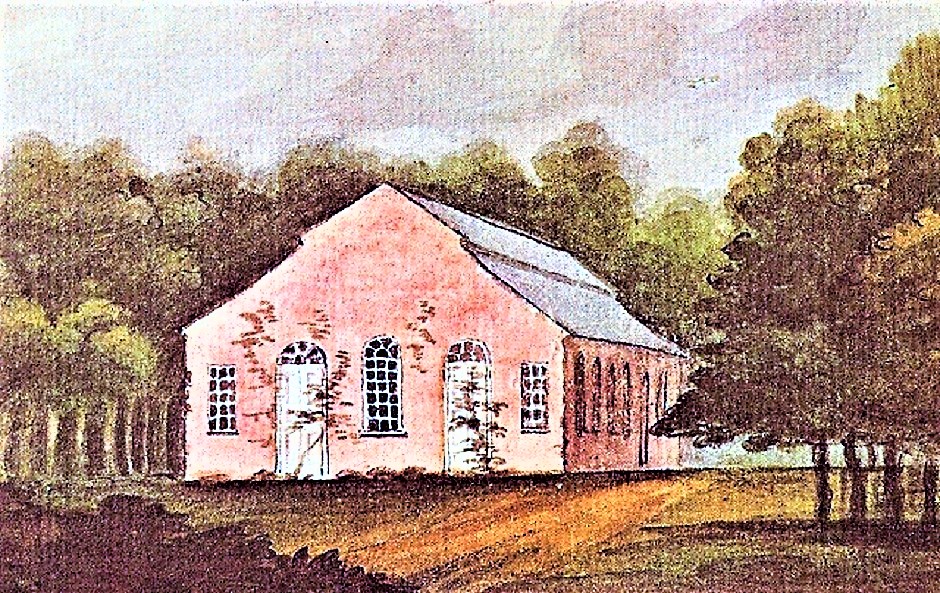 This was St. John’s Colleton, which had been a part of St. Paul’s but was separated from it in 1734, and served “John’s Island, Wadmalaw Island, Edisto Island, and the other adjacent Islands to the seaward. 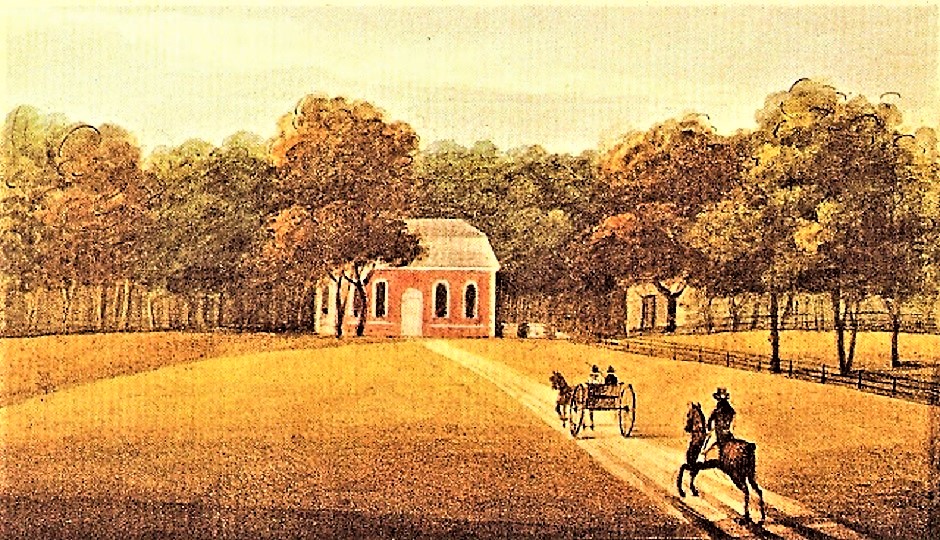 Charles Fraser (1782-1860) A VIEW OF ST. JAMES' CHURCH< GOOSE CREEK,
FROM THE PARSONAGE
The parsonage stood on a slight hill and its lane led dircectly to the church door. In the woods is a small 1759 vestry building, where Parish business could be transacted and where coachmen & grooms might take shelter. 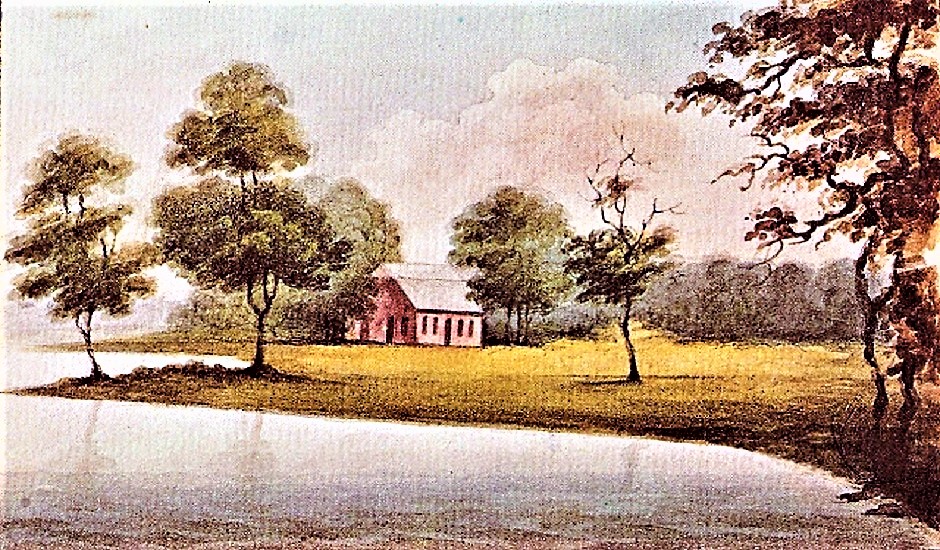 Charles Fraser (1782-1860) A VIEW IN ST. THOMAS’ PARISH POMPION HILL CHAPEL.
The 1765 church was called "Punkin Hill" locally. The Parish of St. Thomas & St. Dennis was made from the union of the Huguenot Church St. Denis & the Parish of St. Thomas which had been laid off by the Church Act of 1706. In Day on Cooper River it says: “on a high bluff, raising abruptly from the bed of the river, stands the Parish Chapel, commonly known as Pompion Hill Chapel, taking its name from the hill on which it stands.” 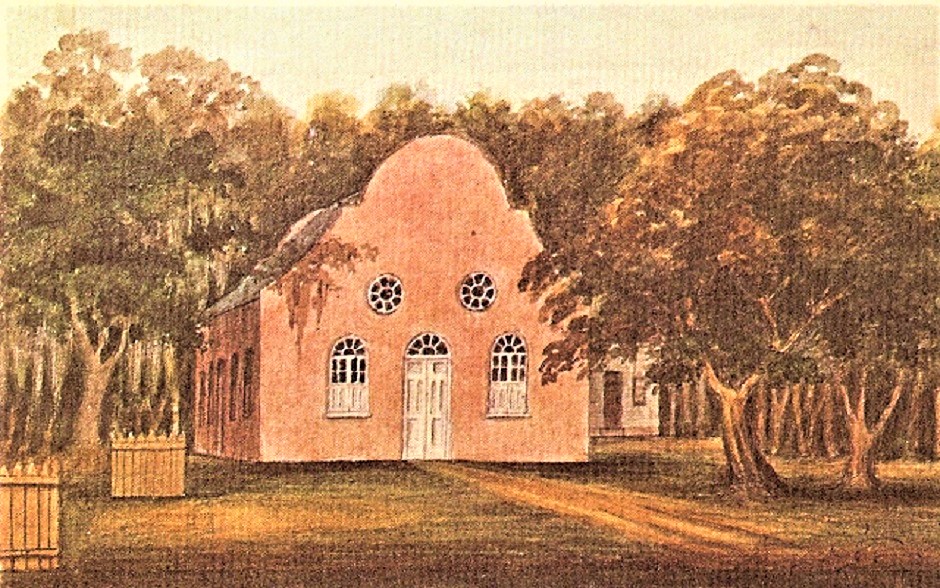 Charles Fraser (1782-1860) THE CHURCH IN ST. BARTHOLOMEW’S PARISH, 1796.
“This part of Colleton County was made a Parish, by an act passed Dec. 18, 1708.” The first missionary, sent by the Society for the Propagation of the Gospel in Foreign Parts was a Reverend Mister Osborn, who arrived in 1713. “His cure was very extensive, and his duty laborious. It was 40 miles long, and 30 wide…He officiated at five different places for the accommodations of his parishioners…Mr. Osborn was greatly esteemed and the Church flourished under his care. This prosperity, however, was soon interrupted. In 1715 the Indian War [Yemassee] broke out and the savages destroyed all the plantations in the Parish…The Missionary with difficulty escaped to Charles Town." By 1760 two brick Chapels of Ease had been built. The Church in this sketch was the Chapel of Pon Pon, which was burnt to the birck walls by the British during the Revolution but rebuilt after the war. The locals then called it "the Burnt Church."

Charles Fraser (1782-1860) A VIEW IN ST. THOMAS’ PARISH POMPION HILL CHAPEL.
The 1765 church was called "Punkin Hill" locally. The Parish of St. Thomas & St. Dennis was made from the union of the Huguenot Church St. Denis & the Parish of St. Thomas which had been laid off by the Church Act of 1706. In Day on Cooper River it says: “on a high bluff, raising abruptly from the bed of the river, stands the Parish Chapel, commonly known as Pompion Hill Chapel, taking its name from the hill on which it stands.” 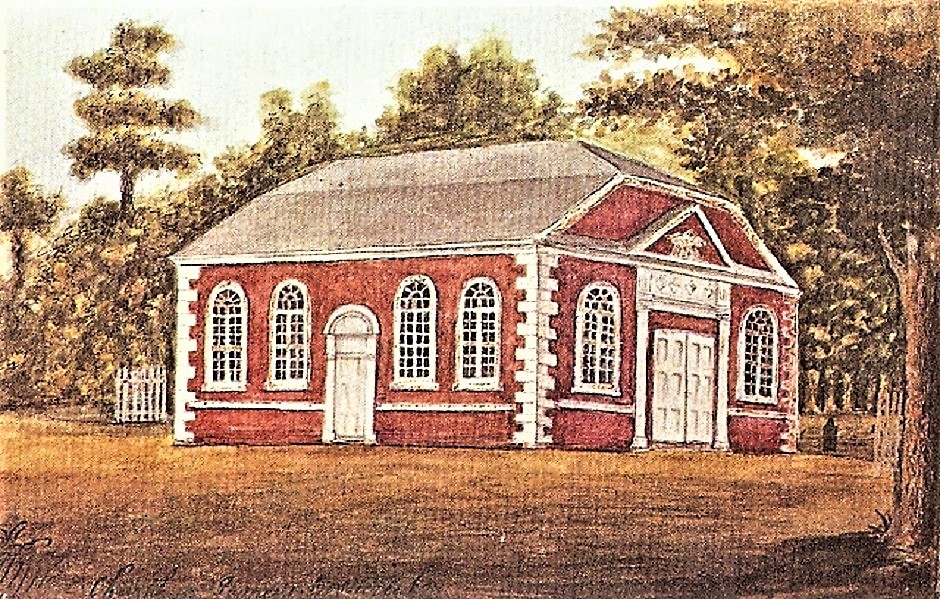 Charles Fraser (1782-1860). CHURCH IN ST. JAMES’ PARISH, GOOSE CREEK.
St. James’ Parish, Goose Creek, was laid off in 1706, and the church was completed in 1719. “So numerous was the congregation of this church that its capacity was found in a few years wholly insufficient”, and a Chapel of Ease was erected about 7 miles from the original church structure. 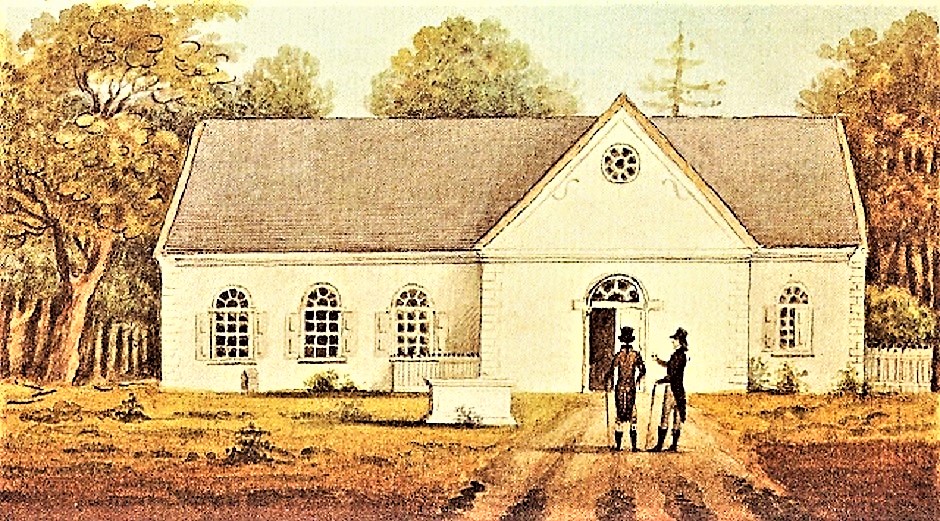 Charles Fraser (1782-1860) THE CHURCH IN ST. ANDREW’S PARISH, APRIL 1800.
Established on the west bank of the Ashley River in 1706, by 1722 the original church had became too small for the parishioners. The church was enlarged in the form of a cross, with a gallery at the west end designated for “people of colour.” Destroyed by fire, it was rebuilt by subscription in 1764, and it covered a great territory. It maintained a Chapel of Ease on James’ Island, which was attended by many Presbyterians on the Island; but, after 1787, the Reverend Thomas Mills states that “the inhabitants of James Island, who were nearly all Presbyterians, or Independents, had procured a minister and organized a Church of their own. After this period, in conformity with the injunctions of the Vestry, my Pastoral duties were generally confined to St. Andrew’s on the main.” 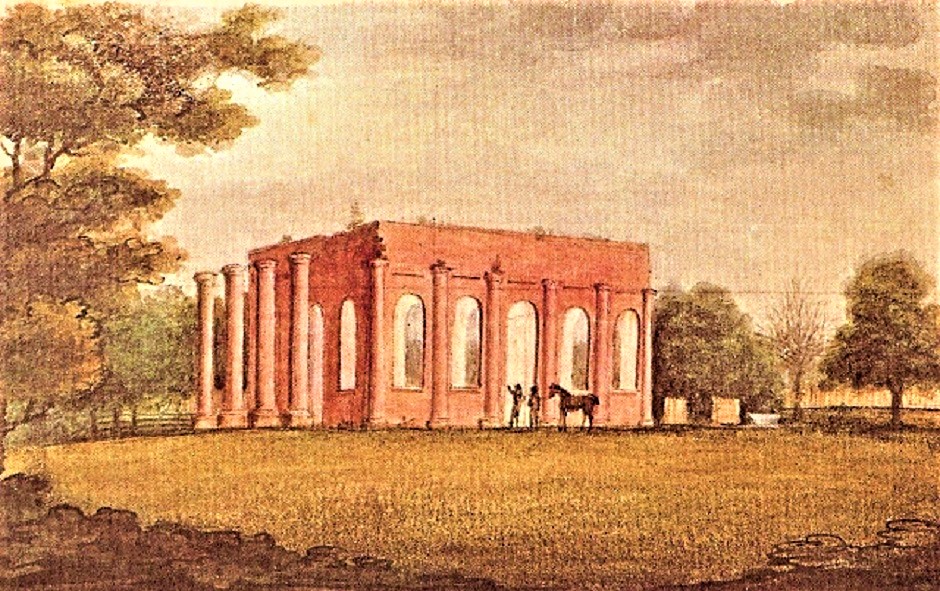 Charles Fraser (1782-1860) REMAINS OF THE CHURCH IN PRINCE WILLIAM’S PARISH.
This parish was often called Sheldon Church because of its proximity to the Bull plantation of that name. “An instance of the hospitality of Carolina, connected with the history of Sheldon Church, has been stated to us b y those who knew the fact. Stephen Bull who live in its vicinity, usually invited as his guests, on the Sabbath, the more respectable part of the Congregation who attended divine service; while his overseer, by his direction, and at his expense, liberally entertained the rest. At that time, seldom less than 60 or 70 carriages, of various descriptions were seen at the Church on the Lord’s Day. It was burnt in 1780 by the British under General Prevost, on their march from Savannah to the siege of CharlesTown.” It was rebuilt on its original lines after the Revolution.
Kimberly Pyszka tells us that in 1706, the Church of England became the established church of South Carolina. Construction of several churches began shortly thereafter under the supervision of local parish supervisors. Archaeological testing at the 1707 St. Paul's Parish Church indicates parish supervisors purposely altered the church's orientation from the traditional east—west orientation in order to make it more of a presence on the landscape. A subsequent regional landscape study of other early-18th-century South Carolina Anglican churches suggests that throughout the colony church supervisors strategically placed churches on the landscape to be material expressions of the Anglican Church's presence and power in the culturally and ethnically divided colony. As a consequence of the intentional placement of churches on the landscape, the South Carolina Anglican Church played a larger role in the development of the colony by affecting the expansion of transportation networks and, later, settlement patterns.  See: Pyszka, Kimberly. ""Built for the Publick Worship of God, According to the Church of England": Anglican Landscapes and Colonialism in South Carolina." Historical Archaeology 47, no. 4 (2013): 1-22.

To read more about South Carolina churches & their landscapes, see:

Kryder-Reid, Elizabeth 1994 As Is the Gardener, So Is the Garden: The Archaeology of Landscape as Myth. In Historical Archaeology of the Chesapeake, Paul Shackel and Barbara Little, editors, pp. 131-148. Smithsonian Institution Press, Washington, DC.