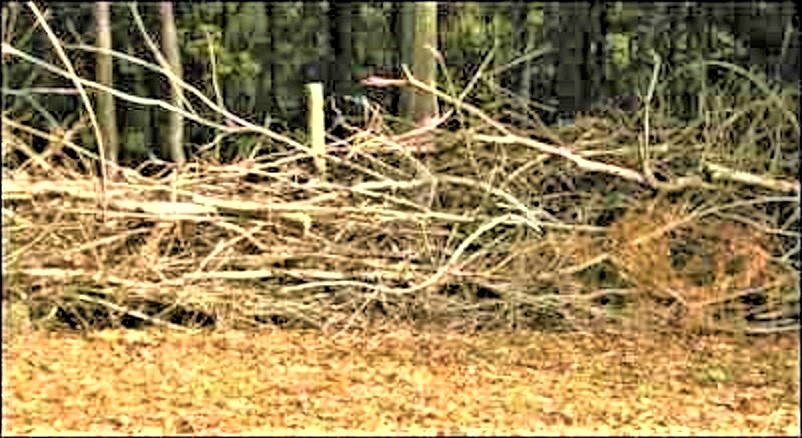 The quickest and most economical fence to construct had as its components the by-products of land clearing. The fieldstone walls which characterized much of the New England landscape represent one fencing variety of the type. In other areas, including Virginia, stumps, brush, logs, deadwood, or combinations thereof were massed into tangled barriers. While the stone wall of New England remained a useful form for centuries. Its wooden equivalent, however, proved neither as durable nor effective and its use was most likely confined to the early stages of settlement or other temporary situations.

In the 17C & 18C Atlantic British American colonial coast, fences were built for mainly practical reasons. In the southern colonies, livestock of all kinds was accommodated in the woods surrounding the cultivated fields. As the animals could be branded or otherwise marked for owner identification & cleared land was often limited, crops came to be enclosed & livestock was thus fenced out. But, in New England & parts of the middle colonies, livestock was customarily fenced in.  By no means restricted to agricultural use, fences also defined & protected all types of rural & urban spaces, such as churchyards, gardens, & workyards, throughout the colonies.
These fences were common in the Chesapeake & in Tidewater Virginia. Fencing was sometimes achieved by the use of masonry walls, but native stone is a scarce resource in the Tidewater region, though brick was used to build some churchyard walls & to enclose certain buildings there. The majority of Virginia fences were constructed of wood. All fence types co-existed during the colonial period; the historical record offers no indication that one type completely supplanted another.
Text from: Partitioning the Landscape: The Fence in Eighteenth-Century Virginia
Vanessa E. Patrick. December 6, 1983. Colonial Williamsburg Foundation Library Research Report Series - 0134
at 4:00 AM