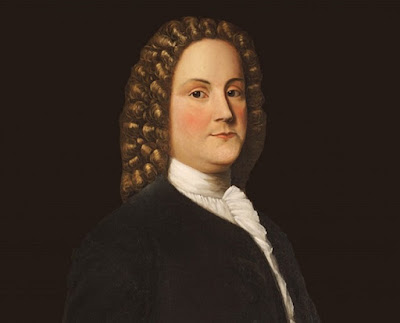 A Young Benjamin Franklin (1706-1790) Robert Feke's 1748 painting
When Franklin was about 16, he met “with a book written by one Tryon, recommending a vegetable diet,” (Franklin, Autobiography) which he promptly stuck to, more or less, for the next three years, & which he returned to for brief spells throughout his life.
In addition, he repeats endlessly over the years his recommendation for moderation in eating:  “Be temperate in Wine, in eating, Girls, & Sloth, or the Gout will sieze you & plague you both” (Poor Richard’s Almanack, 1734)
Vegetarianism was rising during the 18C thanks to Britain's move toward Romanticism. The meatless diet was somewhat widespread during the age of Enlightenment, when new humanist ideas began to develop. Several romantic writers promoted vegetarianism because of their compassion for our fellow animals & their deep relationship to Nature. They denounced the consumption of meat as a inhumane & monstrous attack on living beings. They also developed negative ideas about the industrialization & consumerism beginning to dominate their economy. The rising costs of the meat, the agricultural changes & the emerging humanist values encouraged more & more people to follow a vegan diet. Among the romantics, Alexander Pope (1688–1744) & Joseph Ritson (1752–1803) were probably the most persistent & persuasive vegetarians. 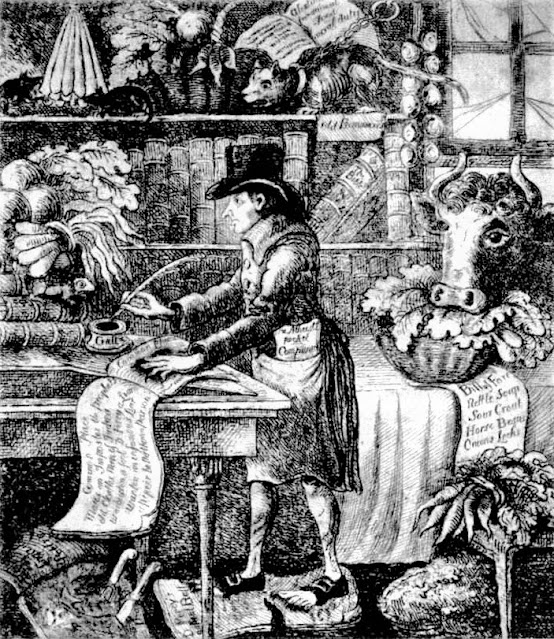 James Sayers (1748–1823), satirical caricature of Vegetarian Joseph Ritson, c 1803. Bodleian Library
Thomas Tryon (1634-1703) was an English merchant who advocated vegetarianism after having heard an inner voice, that he called the “Voice of Wisdom” in 1657. Tryon strongly opposed violence against animals, as his vegetarianism was linked to his belief in spiritual progress. He 1st adopted the diet at the age of 23, saying that he only drank water & ate bread, some vegetables, & cheese.  Tryonadvocated vegetarianism, pacifism and an end to slavery in the Caribbean. His beliefs inspired Benjamin Franklin to adopt the same lifestyle.
Franklin explained: "When about 16 years of age, I happen’d to meet with a book written by one Tryon, recommending a vegetable diet. I determined to go into it. My brother being yet unmarried, did not keep house, but boarded himself and his apprentices in another family. My refusing to eat flesh occasioned an inconveniency, and I was frequently chid for my singularity."
Apparently Franklin hadn't developed a large group of followers in his early years.
at 4:00 AM