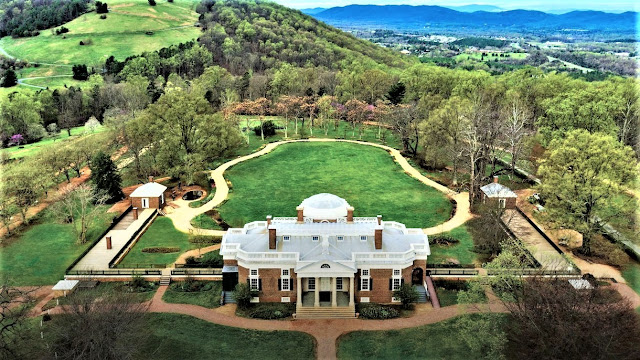 Margaret Bayard Smith (1778-1844), hereafter MBS, was a friend of Thomas Jefferson & chronicler of early life in Washington, D.C. She met Jefferson through her husband, Samuel Harrison Smith, a Republican newspaperman & founder of the National Intelligencer. Mrs. Smith's recollections of Washington society life in the early 19C constitute one of the major sources of information on Jefferson's social life as President. After Jefferson's retirement from political life, Smith visited him at Monticello.
Thomas Jefferson had described landscaping his wooded mountain top in an 1806 letter to William Hamilton (1745-1813)  “The grounds which I destine to improve in the style of the English gardens are in a form very difficult to be managed. They compose the northern quadrant of a mountain for about 2/3 of its height & then spread for the upper third over its whole crown. They contain about three hundred acres, washed at the foot for about a mile, by a river of the size of the Schuylkill. The hill is generally too steep for direct ascent, but we make level walks successively along it’s side, which in it’s upper part encircle the hill & intersect these again by others of easy ascent in various parts. They are chiefly still in their native woods, which are majestic, & very generally a close undergrowth, which I have not suffered to be touched, knowing how much easier it is to cut away than to fill up. The upper third is chiefly open, but to the South is covered with a dense thicket of Scotch (Spartium scoparium Lin.) which being favorably spread before the sun will admit of advantageous arrangement for winter enjoyment. You are sensible that this disposition of the ground takes from me the first beauty in gardening, the variety of hill & dale, & leaves me as an awkward substitute a few hanging hollows & ridges, this subject is so unique & at the same time refractory, that to make a disposition analogous to its character would require much more of the genius of the landscape painter & gardener than I pretend to. I had once hoped to get Parkins to go & give me some outlines, but I was disappointed...
Jefferson continued in 1806, “Of prospect I have a rich profusion & offering itself at every point of the compass. Mountains distant & near, smooth & shaggy, single & in ridges, a little river hiding itself among the hills so as to shew in lagoons only, cultivated grounds under the eye & two small villages. To prevent a satiety of this is the principal difficulty. It may be successively offered, & in different portions through vistas, or which will be better, between thickets so disposed as to serve as vistas, with the advantage of shifting the scenes as you advance on your way."
Jefferson concluded in 1806. “Thither without doubt we are to go for models in this art. Their sunless climate has permitted them to adopt what is certainly a beauty of the very 1st order in landscape. Their canvas is of open ground, variegated with clumps of trees distributed with taste. They need no more of wood than will serve to embrace a lawn or a glade. But under the beaming, constant & almost vertical sun of Virginia, shade is our Elysium. In the absence of this no beauty of the eye can be enjoyed. This organ must yield it’s gratification to that of the other senses; without the hope of any equivalent to the beauty relinquished. The only substitute I have been able to imagine is this. Let your ground be covered with trees of the loftiest stature. Trim up their bodies as high as the constitution & form of the tree will bear, but so as that their tops shall still unite & yield dense shade. A wood, so open below, will have nearly the appearance of open grounds. Then, when in the open ground you would plant a clump of trees, place a thicket of shrubs presenting a hemisphere the crown of which shall distinctly show itself under the branches of the trees. This may be effected by a due selection & arrangement of the shrubs, & will I think offer a group not much inferior to that of trees. The thickets may be varied too by making some of them of evergreens altogether, our red cedar made to grow in a bush, evergreen privet, pyrocanthus, Kalmia, Scotch broom. Holly would be elegant but it does not grow in my part of the country...I have written you a treatise on gardening generally, in which art lessons would come with more justice from you to me.” 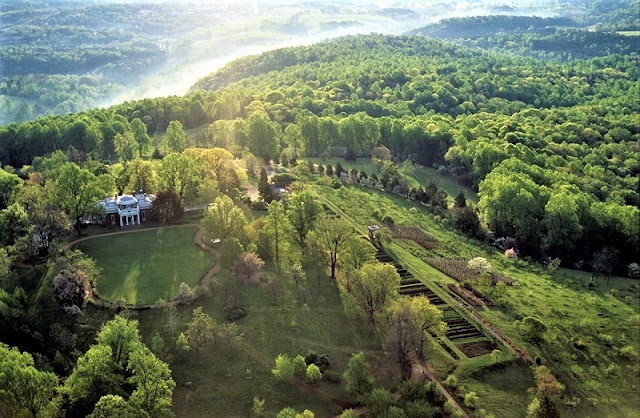 “... how sublime to look down into the workhouse of nature, to see her clouds, hail, snow, rain, thunder, all fabricated at our feet!” Jefferson to Maria Cosway in 1786

Margaret Bayard Smith (1778-1844) described what she saw on her trip to Monticello in 1809,"Monticello is a small mountain, rising six hundred feet above the surrounding country, on the summit of which is a large edifice, built in the modern style. The base of this small and isolated mountain, which is washed by the Revanna, exceeds a mile in diameter. It is encompassed by four parallel roads, that at equal distances sweep round it, and are so connected with each other by easy descents, as to afford, when completed, a level carriage-way of almost seven miles. 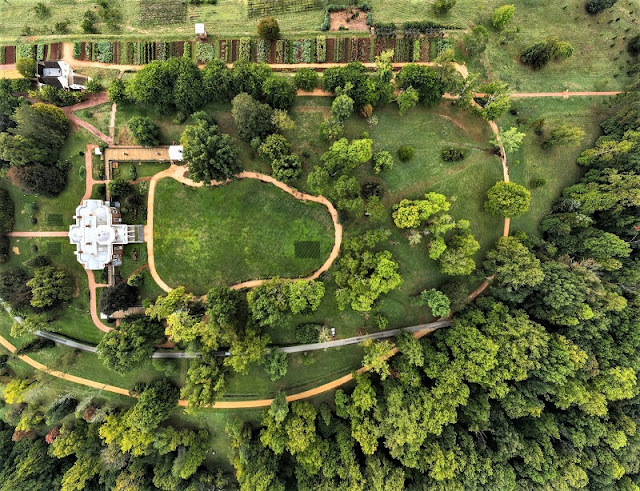 MBS 1809 “At present, the whole, with the exception of the summit, is in wood; but it is the intention of the proprietor to blend cultivation and forest, in such a manner, as to present that variety most grateful to the eye of taste. 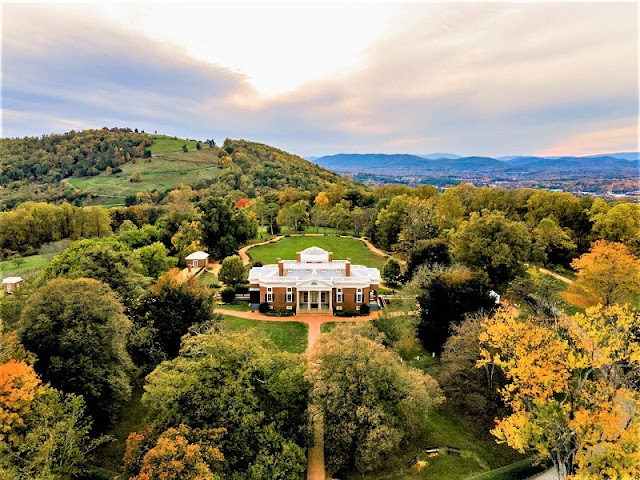 The Entrance to Monticello East Front Photo by Ian Atkins

MBS 1809 “On the top is a nearly level plain, of about ten acres, formed by art, in the shape of an ellipsis, with its longest diameter running east and west, corresponding to the two main fronts of the house. The mansion is a structure presenting a front in every direction of a hundred feet in length, and above sixty in depth. 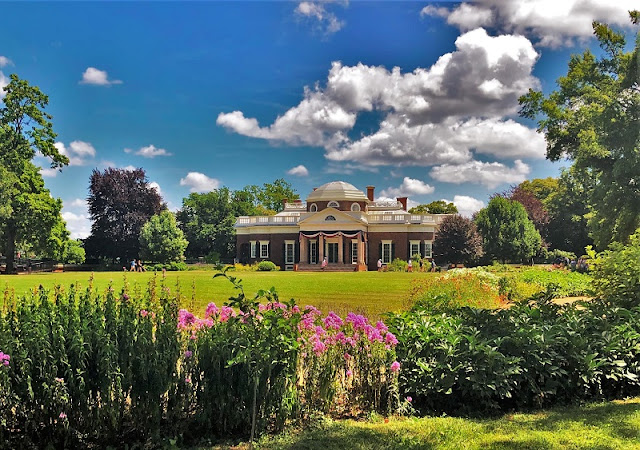 MBS 1809 “The principal front looks to the east, on an open country, and is adorned with a noble portico, with a corresponding one on the west. A lofty dome of twenty-eight feet in diameter, rises from the centre of the building. The north and south fronts present arcades, under which are cool recesses, that open in both cases on a floored terrace, projecting a hundred feet in a straight line, and then another hundred feet at right angles, until terminated by pavilions. 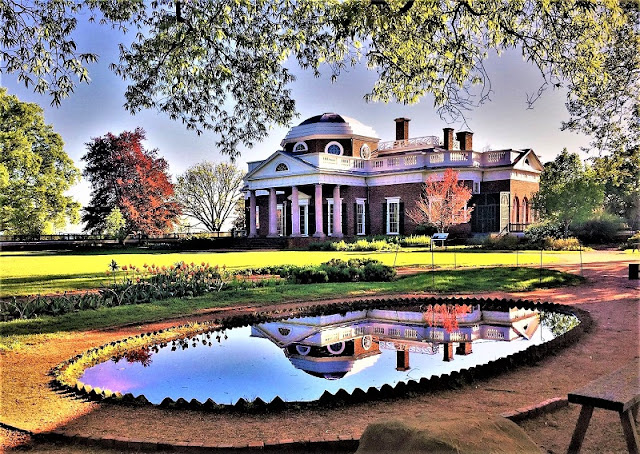 Fishpond on West Front photo by William W. Bergen
MBS 1809 “The level on which the house stands, is laid out in an extensive lawn, only broken by lofty weeping willows, poplars, acacias, catalpas, and other trees of foreign growth, distributed at such a distance from the house, as neither to obstruct its prospect, nor that of the surrounding country of which it commands the view. From this lawn you contemplate, without the obstruction of any intervening enclosure, the mountains above, and the country below, with frequent glimpses of the Revanna. This elevated spot commands a view of more than sixty miles, limited only by the horizon on one side, and the distant mountains on the other. Garden Terrace off the West Front photo by William W. Bergen. The garden pavilion at the midpoint of Monticello’s vegetable garden was  Jefferson’s favorite place to sit & read.

MBS 1809 “This dwelling, and the whole surrounding scene, is eminently fitted to raise an interest beyond that which such objects ordinarily excite in the mind. Every thing, moral and physical, conspires to excite and sustain this sentiment. You stand on the summit of a mountain, on the east affording a view of an open country, presenting a most extensive and variegated prospect; on the west, north, and south, by the Allegany itself, which, rising from beyond the south mountain, rears its majestic head in awful grandeur. Here, in this wild and sequestered retirement, the eye dwells with delight on the triumph of art over nature, rendered the more impressive by the unreclaimed condition of all around. 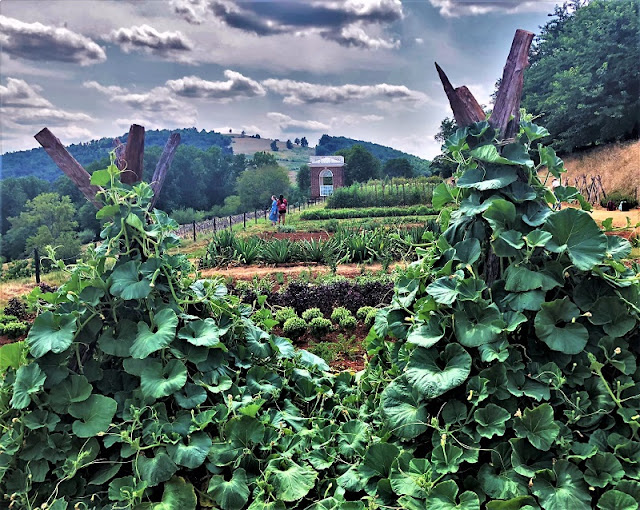 On the Garden Terrace off of the West Front by William W. Bergen

MBS 1809 “Here it contemplates a spacious and splendid structure, commensurate, in some degree, with the mountain on which it stands; but, above all, it beholds its architect and its owner! 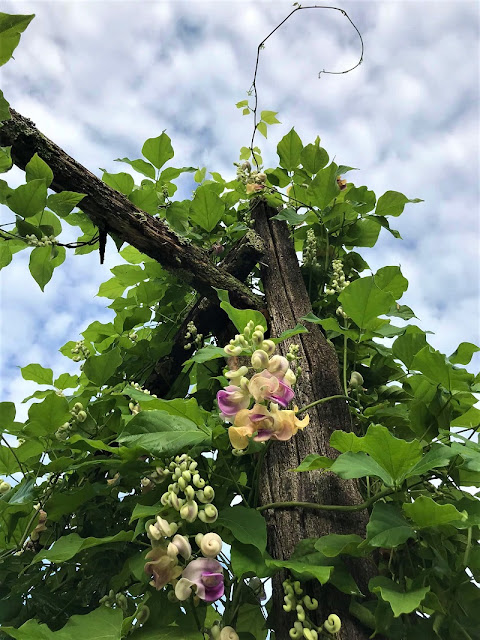 “The most beautiful bean in the world is the Caracalla bean which, though in England a greenhouse plant, will grow in the open air in Virginia and Carolina.” Thomas Jefferson 1792

MBS 1809 "On this spot, one, the most illustrious citizen of the only free country on earth—one of the founders of its independence, the advocate of its rights—full of years and of glory, respected for his talents, venerated for his services, beloved for his virtues, withdrawing from accumulating honours, seeks repose in the bosom of his family. 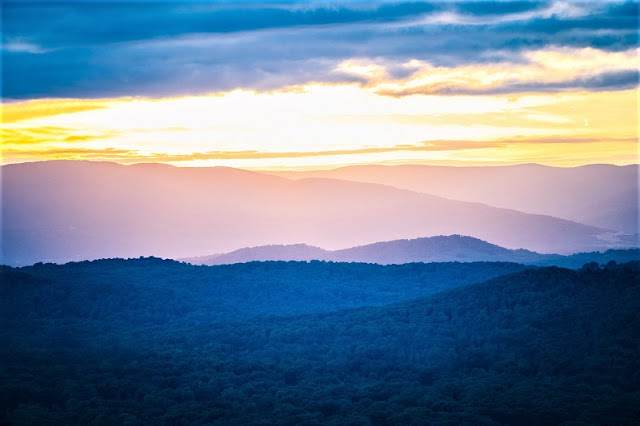 MBS 1809 "On this elevated spot, you behold him reaping the harvest of his virtues, contented, happy; as immoveable as the mountain on which he dwells, and serene as the atmosphere around its brow, while the storm rages at its foot." 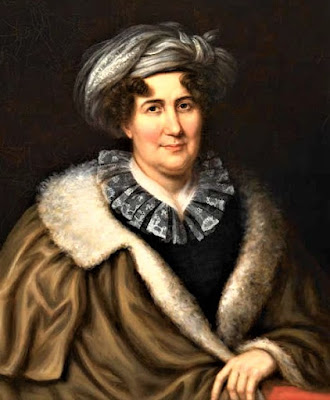 Excerpt from Margaret Bayard Smith’s Account of a Visit to Monticello in 1809, as published within A Winter In Washington: or, Memoirs of the Seymour Family, in 1824