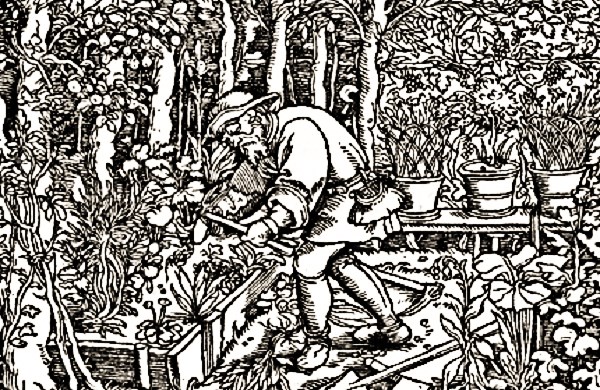 Woodcut of man at work in garden by Hans Weidig

The Virginia Company (in Virginia 1607-1624) asked Sir Thomas Gates (1585-1621) to impose a strict set of regulations on the colony. Gates, who became governor of the colony in 1611, and Sir Thomas Dale (c 1560-1619), the marshal, wrote, and enforced the laws, the earliest written English laws in the British American colonies.  These laws were more like a business "code of conduct" intended to regulate the everyday activities of its members, employees, & servants, both men & women, working in Virginia.

What man or woman soever, shall rob any garden, publike or private, being set to weed the same, or wilfully pluck up therein any roote, herbe, or flower, to spoile and wast or steale the same, or robbe any vineyard, or gather up the grapes, or steale any eares of the corne growing, wheter in the ground belonging to the same fort or towne where he dwelleth, or in any other, shall be punished with death.
at 4:00 AM