Proposal for an annual importation of AMERICAN SEEDS into Scotland.

A Taste for the propagation of American plants, particularly trees, has of late diffused itself very much in this country. And such a taste, doubtless, deserves to be encouraged: for theoretical speculation gives us reason to hope, and time and experience will probably Convince us, that these plants may prove the means of making considerable improvements in this kingdom.

But this taste labours under great discouragements at present. In the first place, the skill and fidelity of the savers and collectors of these seeds in America are uncertain. In the next place, the integrity of the seedsmen in Britain is not always to be trusted; who, from the expense they are at in procuring these seeds, are often tempted, if any others remain on hand over year, to dispose of them as fresh seeds. And though nothing were to be feared in either of these respects ; yet, after all, there is commonly little choice in the assortments sent over at random, and a man curiosity is often disappointed in his inquiries after the seeds he wants.

To remedy these inconveniencies deserves the attention of all who wish well to planting, gardening, or agriculture. And as our new acquisitions in America promise us a large accession of plants to our former collections, and of plants too to which the climate of Britain will be peculiarly suited, the following proposals are humbly submitted to the consideration of all who will) well to their country.

I. That a subscription shall be set on foot for an importation of American seeds into Scotland, the subscription-lnm being two guineas each person.

II. That the scheme shall be put into execution this year 1764.

III. That a botanical catalogue, with the provincial names, shall be made up, with the greatest care, of American, and particularly Canadian, plants and trees, which can be supposed to thrive in the open air in Britain.

IV. That a correspondence shall be settled with some persons of integrity, and skill in botany, residing in one or other of the colonies of New-England, New-York, Pennsylvania.

V. That the catalogue of plants shall be transmitted to them, that they may send over a quantity of the seeds of the plant: in proportion to the sums subscribed.

VI. That they shall also be directed to inquire after, and transmit, a particular information concerning the circumstances attending the growth of the several plants, so far as they can, viz. the soil and latitude where they grow naturally ; what region of the air they inhabit; whether they are found near the coast, or in the inland parts; if growing on hills, or in their neighbourhood ; what aspect they delight in, dye.

VIl. That this commision shall be given early in the season, so that the seeds may be properly saved, and imported in due time.

VIII. That when the seeds come home, they shall be divided into small lots, of, the value of ten shillings or under, each lot comprehending a quantity of each kind of seeds.

X. That the subscribers shall be furnished with what lots of these seeds they want, at prime cost, as value for part of their subscriptions.

Xl. That the remaining lots, sealed up, and marked with the year and price, shall be put into the hands of seedsmen, to be sold out to all who call for them, not more than one lot to one person, in order to indemnify the subscribers; and that if any os the lots of seeds shall remain unsold after one year, the same shall be returned to the society.

XII. That the subscription shall continue during pleasure.

By these means there would be a regular and annual importation of seeds, so that if through the accidents of seasons the feeds of one year should misgive, the planter would be sure of a supply the next year; and the person employed in America would find it worth while to be at pains in collecting these seeds, and transmitting them safe, and in a vegetating state, to Britain.

Royal Botanic Garden Edinburgh
For the next decade he practiced medicine, indulging in botany in his spare time. In 1760, he was appointed as King's Botanist & as Professor of Botany & Materia Medica at the University of Edinburgh.  Hope succeeding in combining the gardens & collections at Trinity Hospital & Holyrood to a new, combined site on the road to Leith. He also succeeded in obtaining a permanent endowment for the garden, thus establishing arguably the first ever "Royal Botanic Garden."

When Hope became the 6th Regius Keeper of the Royal Botanic Garden Edinburgh in 1761, he made a momentous decision early on in his tenure: close down the existing small physic gardens at Holyrood to create a new, much larger garden on a 5 acre site on Leith Walk. 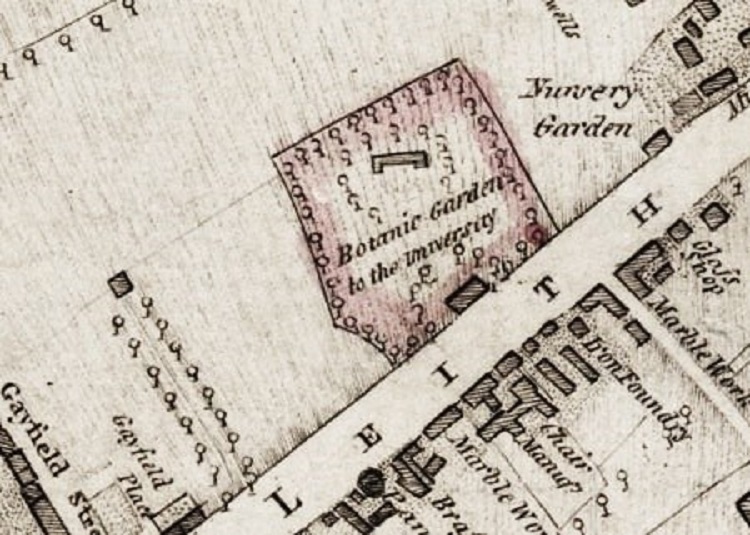 At its entrance, Hope decided to build a little house which could serve as a gateway to the garden, a home for his head gardener, & a classroom in which he could teach medical students about botany – it would come to be known as the Botanic Cottage.

Designed by noted architects John Adam & James Craig – the latter responsible for designing the layout of Edinburgh’s New Town just a few years later in 1767 – the Botanic Cottage was completed in 1765.  Hundreds of students learned about botany in its large upstairs room overlooking the garden, hearing directly from Professor Hope about his experiments & studies, & referring to his detailed diagrams & illustrations.
at 4:00 AM