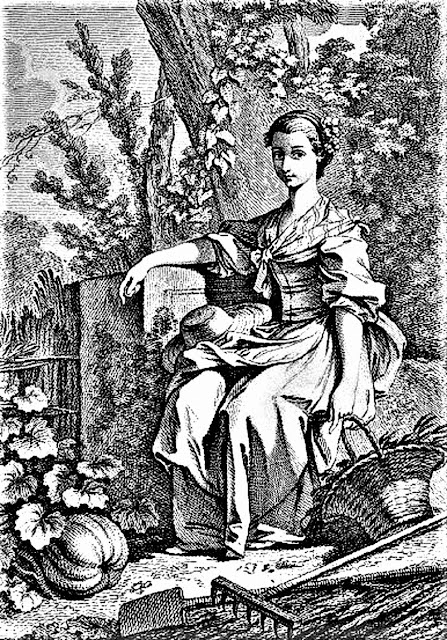 "Mrs. R. often goes & looks at gardens, directs how to lay them out, & what to buy for them. She then orders the plants of others, & sells on commission, having them arranged according to her own taste, influenced by that of the purchaser. Her purchases are made of a German, living some distance from town, who can raise them cheaper than she could in the city. Her compensation, of course, varies greatly.

"A landscape gardener writes : “ What a lady could do as landscape gardener at the West, I do not know. I am rather inclined to doubt her success at the East. It would require too much time & space to enter here into the details of what are required to constitute a landscape gardener: First, one must have a decided love for it, & a willingness to sacrifice much to the pleasure of the occupation. Nor can I say a great deal in favor of the profits. I have never been able to make a living by the profession, although I have often thought if I had gone to New York, or farther West, the case might have been different. In pages 381 & 382 of Country Life,' & in many other parts of the book, you will see what I consider essential to the making up & preparation of a landscape gardener, & better expressed than I can condense into a letter.”

"Mr. C., of Massachusetts, writes : “I have never known a lady to undertake the profession of landscape gardening; & much of the labor which I find it necessary to perform, would be impossible for a lady. Still, there is much in which female taste would find abundant field for exertion, if the labor could be so divided as to make it profitable. My first work  on any estate is to make an accurate topographical survey of the ground, &draw a plan of it in its natural state, & then proceed to make my designs for its arrangement; & when that is done, if required, I undertake the superintendence of the work at the ground.

"A lady would have to employ a surveyor, in the first place, & would labor under many disadvantages in directing the operations upon grounds; &, to judge from my own experience, the business could not be made profitable under such circumstances. Loudon's 'Encyclopædia of Gardening' will give the best directions I know of for the necessary operations of designing & executing plans, & Downing's work, with Sargent's appendix, comprises enough suggestions, on matters of taste, for the use of any person who is possessed of innate natural taste, without which I would advise no one to attempt to be a landscape gardener.”

The Employments of Women: A Cyclopaedia of Woman's Work by Virginia Panny Published Walker, Wise & Company, 1863