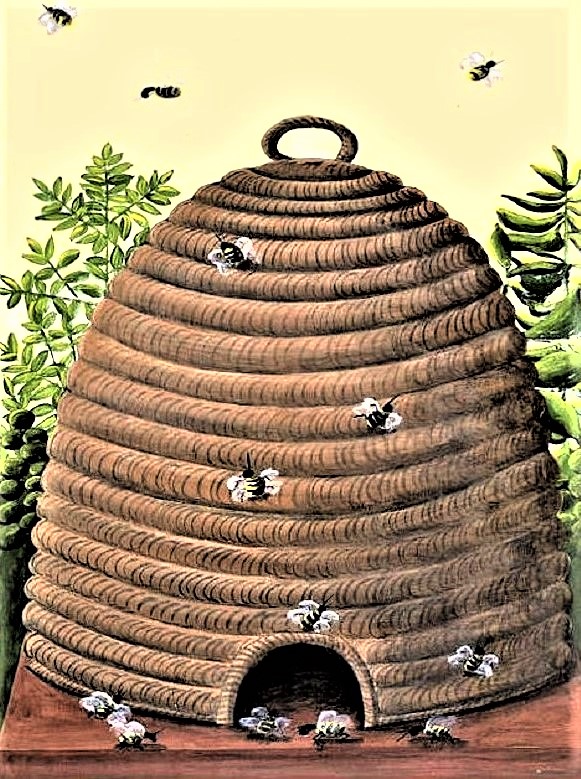 A beehive is a receptacle used as a home for bees. Most beehives are built by bees, but some are man-made. 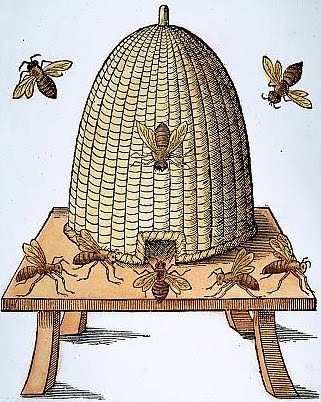 
Honey bees weren't native to North America, and were brought over by the English colonists in the early 17th century. 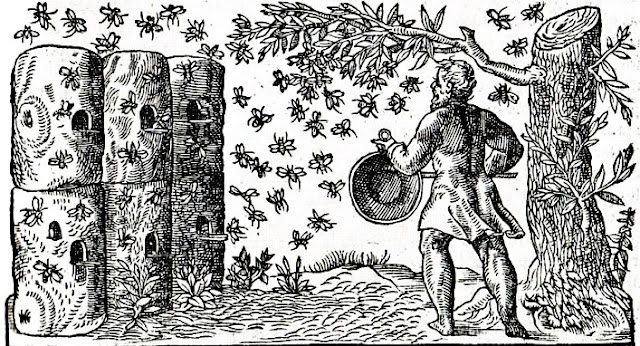 Honey bees are four-winged insects which need to live together in communities composed of one queen, or perfect female; a small number of males or "drones;" and an indefinite number of undeveloped females or "neuters" (which are the workers). Bees produce wax and honey, pollinating plants as they do.

Honey bees fly from flower to flower collecting the plant's sugary nectar. While doing so, the insects' hairy bodies trap the dusty pollen from the flowers' anthers and then transport that substance to fertilize other flowers. Meanwhile, the bees internally process the watery nectar into dense honey, which they store in their hives as a communal food source in the winter. 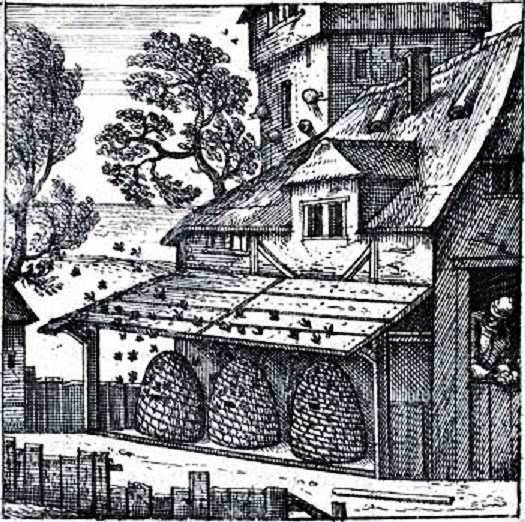 Worker or neuter bees–which live about five weeks in the summer–make wax from about the 10th day of their lives to the 16th. When workers are about 10 days old, they develop special wax-producing glands in their abdomens. 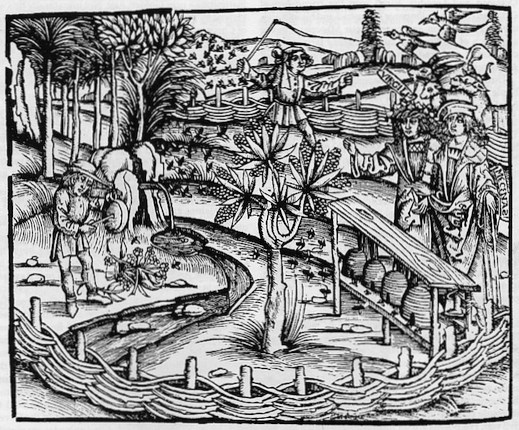 The young bees then eat honey. The glands convert the sugar in the honey into wax, which seeps through small pores in the bee's body leaving tiny white flakes on its abdomen. Bees then chew the bits of wax, mold it, and add it to the construction of the honeycomb. Bees build the combs for the queen to lay her eggs into and to store honey to fed themselves through winter, when there are no flowers. Honeycombs consist of six-sided tubes, which begin as circles pressed side to side, an efficient form that uses less wax for the volume of honey held than other shapes like triangles or squares. 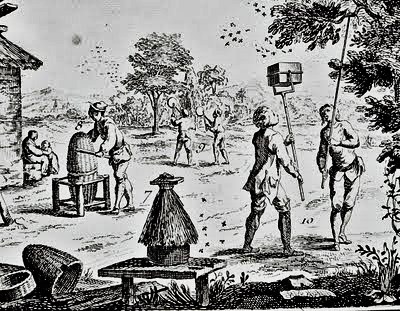 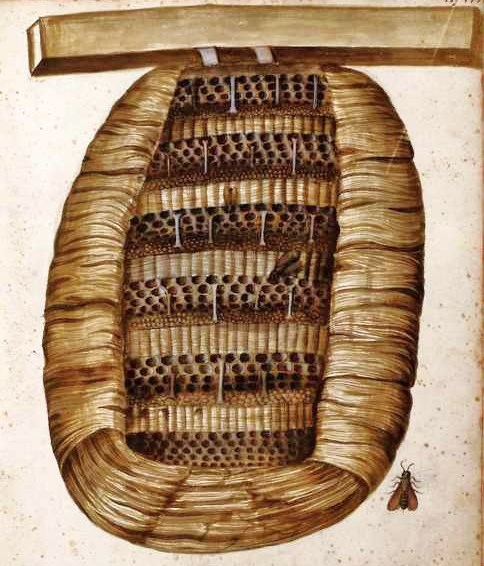 One of the early English garden books, New Orchard and Garden, written by William Lawson in 1618, stated, "There remaineth one necessary thing...which in my Opinion makes as much for Ornament, as either flowers, or forme, or cleanness...which is Bees, well ordered." 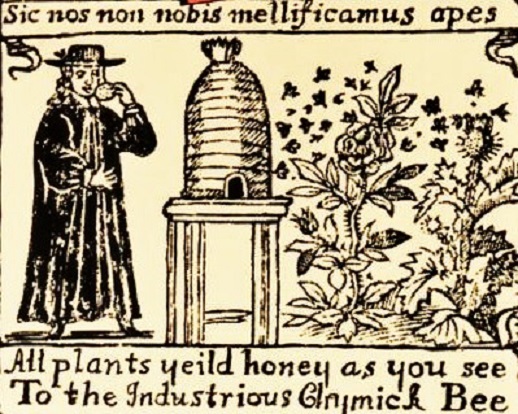 To help his fellow gardeners achieve bees, well ordered, William Lawson wrote The Country Housewives Garden, Containing Rules for Hearbes and Seeds of Common Use...Together With the Husbandry of Bees in 1637. Interest in beekeeping grew, and Lawson's treastise was followed nearly a century later by Joseph Warder's The True Amazons, or the Monarchy of Bees, which was also published in London.

During the 18th and early 19th centuries, American gardeners and farmers harvested honey as an alternative to expensive imported sugar and harvested the beeswax from the hives for a number of commercial purposes. 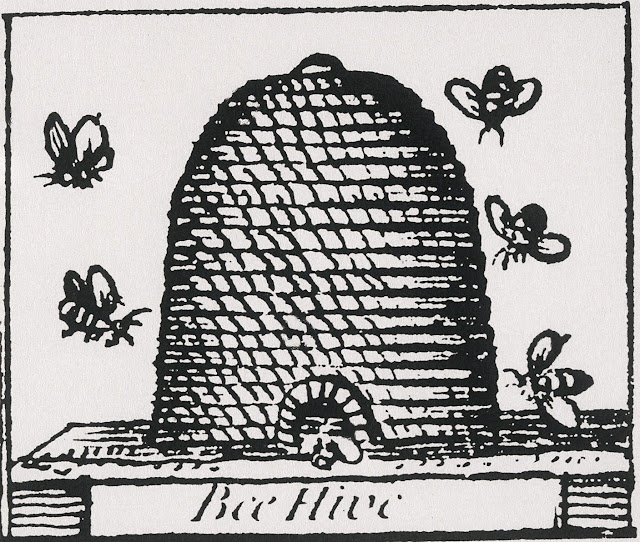 Bees build their own hives in a dark enclosed, dry space like in a tree trunk or wall cavity or under the eves of a roof. For centuries, people have created artificial beehives to house bees, often in the garden, for the purpose of producing honey and wax while encouraging pollination of nearby precious plants. Many gardeners consider these hives as ornamentation in their gardens as well. Often a special section of the property was set aside to keep the bee hives. They were kept together in a bee-garden, a bee-yard, or a bee-fold. 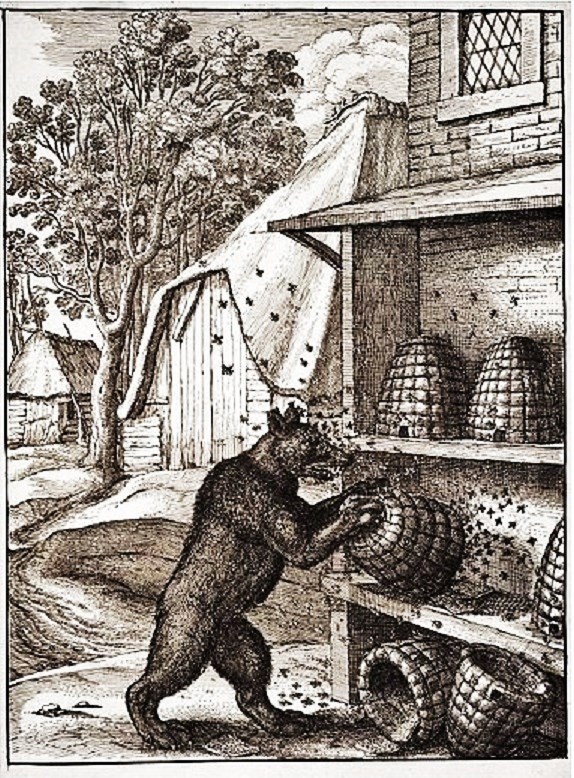 Wenceslas Hollar - The bear and the honey

Gardeners of the period constructed several types of beehives. A beeskep, made of thick coils of grass or straw worked into the shape of a dome, was popular in 18th century England; but in America, boxhives made of wooden frames, often sitting on tall wooden legs, were more common in the 18th and 19th centuries. In its simplest form, there is a single entrance at the bottom of a beeskep with no internal structure, except what the bees build themselves. Bees attach their wax combs to the garden hive's roof and walls, just like they do in wild hives. 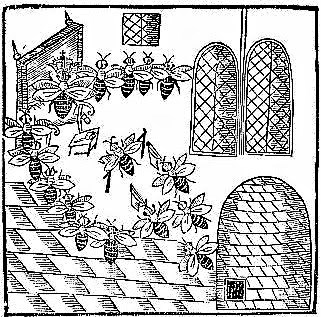 In order to learn about the progress of their hives, beekeepers had only one option -- to inspect beeskeps from the bottom. It was nearly impossible to peek into the interior of occupied beeskeps for diseases and pests; and the removal of honey often meant the destruction of the entire hive. When it was time to harvest the honey, beekeepers drove the bees out of the skep, often to a waiting empty skep.

Honey from these hives was typically extracted by crushing the wax honeycomb to squeeze out the honey. This harvest method typically provided more beeswax but far less honey than modern methods. Many American households used beeswax to make candles in the 18th and 19th centuries. Most churches burned beeswax candles. 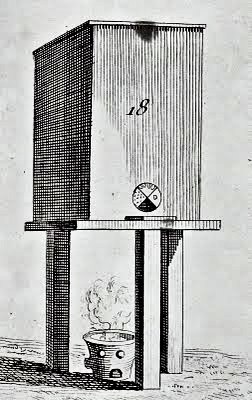 The boxhives, more popular in America, were simple wooden shelters to house a swarm of bees. In 1797, in Annapolis, Maryland, silvermaker William Faris wrote, A (neighbor) "Made Me a pressent of Hive of Bees." Later he noted that he had "put the frame of the bee house together." After a few years, he declared, drove the Bees out of the Old Hive into a nother and took the honey, the Hive was Rotten and Ready to tumble to peaces."

Richard Parkison, an English visitor to the Chesapeake, reported at the end of the 18th century, "Honey-bees are kept in America with equal success as in England...I never saw a hive made of straw."

New Yorker John Nicholson wrote about housing bees early American beer in The Farmer's Assistant in 1820, "The method practised in this Country is, to have rows of beehives set close together, in a building made for the purpose, which is called the bee-house. The apiary, spoken of by British Writers, seems to be quite different from this; as the hives are recommended to stand 6, some say 12, feet apart; and to be firmly fixed in a stake set into the ground. We have, however, never seen any particular advantage pointed out, by having the hives so far apart; while the expense of the apiary must, in this way, be much greater, as every hive must have its separate roof or covering. We shall therefore speak of the apiary, or beehouse, as we have it in this Country. 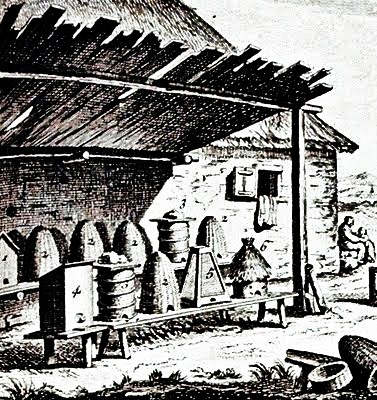 "It should be at a suitable distance from any place where cattle are kept, or where Horses are tied; from hogsties, and every other place where filth is collected. It is well to place it in a remote part of the garden, and let some shrubery grow round it for the Bees to light on, if they are so disposed, when they swarm. No trees should be near it. Let it stand leaning forward a little, facing the south, and clear of shade, with the front part of the roof projecting over considerably, to prevent rains from weting the hives. These should be kept clean, dry, and sufficiently warm in Winter; but not so warm as to tempt the Bees abroad in warm Winter-days."

It was also difficult to get honey from these wooden boxhives without damaging or destroying the colony and sending the bees into frenzied stinging. Honey bee stings release pheromones that prompt other nearby bees to attack. 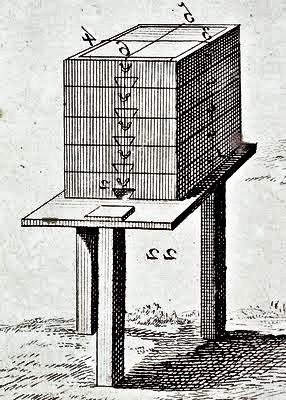 Angry honey bees inserted themselves into several battles in 18th & 19th century America. In North Carolina, Governor William Tryon wrote in 1771, "The Army marched and crossed Abbets Creek, & encamped on Captain Merril's plantation. A Valuabe tract of Land and well cultivated...This Night a false alarm was given by an uncommon Incident. The Horses of the Army, upwards of one Hundred, were at pasture with Bells Round their Necks, in a field near to the Line of Encampment; and in an adjoining Garden were several Bee Hives some Soldiers taking a Fancy for Honey overturned the Hives about Midnight the Bees being thus disturbed & enraged dispersed themselves among the Horses in the Pasture stinging them to such a degree that they broke in one confused Squadron over the fence, and Came on full Gallop & in full Chorus of Bells, up to the Camp. The out Centinels uninformed on the real Cause joined in the Signal of Alarm; and the Cry through the Camp was 'Stand to your Arms' Stand to your Arms." 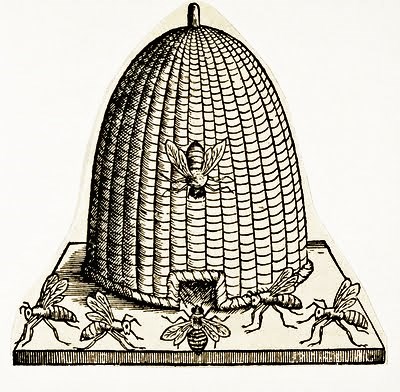 A book on the Civil War battle at Antietam, Maryland, Unfurl Those Colors quotes Private John D. Hemmingen of the 130th PA: “In our line of advance a number of beehives were over turned, and the little fellows resented the intrusion, and did most unceremoniously charge upon us, accelerating our speed through the orchard toward the entrenched position of the enemy."

Fixed-comb beeskeps and boxhives remained popular in the United States until the 1850's, and yielded about 10-15 pounds of honey per colony a year, as compared to over 100 pounds in modern, manmade beehives. 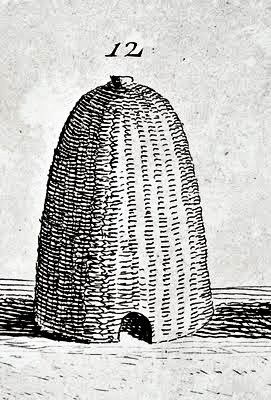 The beeswax collected from beehives may have been even more important than the honey for the local economy. Peter Force's "Tracts on Virginia" reported in 1650, that honey was sold at 2 shillings a gallon and beeswax at 4 shillings for 100 pounds.

In 1771, Pennsylvania exported 29,261 pounds of beeswax; and by 1773, the total had climbed to 64,546 pounds exported by Philadelphia merchants. That figure only represented the amount shipped to other locations, and not the untold pounds cast into beeswax candles by local professional chandlers, housewives, servants, and slaves. 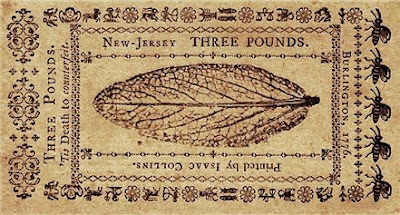 In 1791, the shop of George Meade on Philadelphia's Walnut Street Wharf announced that it had hogsheads of Madeira Wine, Irish Linens, and Pork of prime quality that could be purchased with payments of, among other things, quantities of raw beeswax. And Philadelphia druggist George Hunter noted that his shop offered medicines, paints, brushes and dye stuffs that could be purchased by cash, Jersey State or Pennsylvania, or "bees wax."

Beeswax was used to treat cloth to make it water-resistant, including waxed clothes for shrouds, bedticking, and marine supplies. Beeswax was also used in printer's ink, polishes, sealing wax, cosmetics, ointments, grafting wax, and for decorative ornaments of wax fruits, flowers, and portraits. 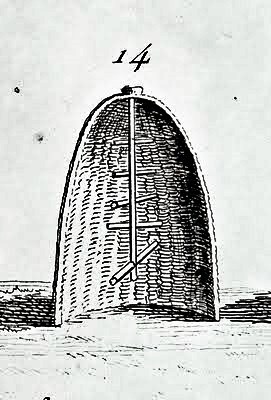 In North Carolina, the first record of beekeeping appeared in Albemarle County records in 1697. Court records across the colony show sales & export of beeswax and honey throughout the 18th century. In 1768, Royal Governor William Tryon (1729-1788) allowed the payment of quit rents in beeswax as well as money & other goods. 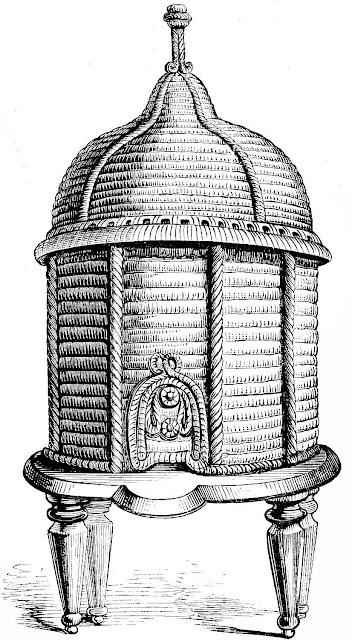 The honey bee was so important in the colonial economy that in 1776, the new state of New Jersey printed its image on its currency. In the 18th and 19th centuries, the beehive became an icon in Freemasonry as a symbol of industry and cooperation. 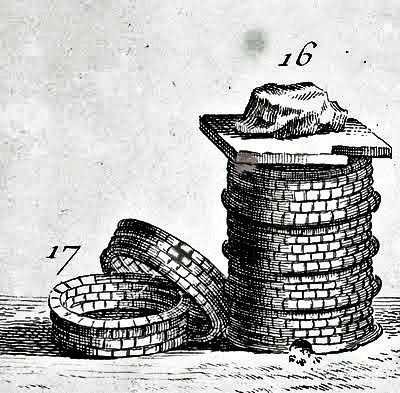 The beeskep is one of the symbols of the state of Utah; because it was associated with the honey bee, an early symbol of Mormon pioneer industry and resourcefulness.
at 4:00 AM