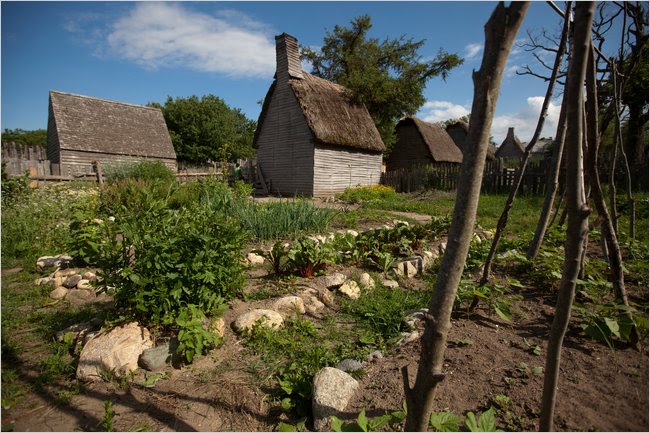 The Fuller Garden in the English Village at Plimoth Plantation, in Plymouth, Mass.

Who was Good King Henry?

I first encountered the label in the Fedco Seeds catalog, as a common name for a plant in the genus Chenopodium. It’s an edible perennial with shoots like asparagus and leaves like spinach. But before Good King Henry was a salad green, he was, ostensibly, something nobler: European royalty.

There is no shortage of English Henrys to choose from, though few are remembered as paragons of good government. And did any of them have an appetite for roughage? On this question, history is mostly quiet.

What if Henry wasn’t a king at all, but an elf? That’s one of the hypotheses the botanical historian Judith Sumner put to me by e-mail.

“Henry (or Heinz or Heinrich) was a typical name for elves,” she wrote. “So the plant name may reflect some presumed magical qualities rather than commemorating an actual king. The ‘good’ part might mean it was safe to ingest.”

The exact namesake for Good King Henry may be lost to time. But then the plant itself, like so many others, has almost vanished as well. In the raised-bed gardens that flank the houses at Plimoth Plantation, Ms. Wall grew Good King Henry for years.

But “I didn’t save the seed,” said Ms. Wall, who bought it every year from catalogs instead. “And then the seed was gone for a long time.”

The mystery of Good King Henry made me wonder about other Colonial-era vegetables that have all but disappeared from our gardens and dinner plates. Gardeners today will routinely raise a dozen varieties of tomato, a plant utterly foreign to early Americans. So why do we neglect common Colonial food plants like burnet, smallage, skirrets, scorzonera, gooseberry and purslane? And how would they taste to us now?

When it comes to Good King Henry, Ms. Wall said, the flavor is easy to describe: bland. “That’s probably why it fell out of favor,” she said. “It wasn’t special. It doesn’t get into the recipe books, so it’s just forgotten.”

In contrast, she said, spinach, a green that “springs up in the English garden scene in the 1580s,” grew stalwartly through the country’s mild summers. And by the 17th century, “suddenly all the recipes called for spinach: salads of spinach, spinach boiled, with added butter and cinnamon and sugar and raisins.”

The story of early American kitchen gardening hides in recipes like these. Another source is herbals — what one modern historian calls “botanical bibles.” Yet botany, as we know it, is just a shadow on these pages. The herbal presents a pre-scientific universe, a realm of astrology and magic.

A “vegetable” could be any plant. An “herb” was a useful one, for the table or the medicine chest.

The colonists relied on popular guides like “The Herball, or Generall Historie of Plantes” (1597), 1,400 pages of reminiscences, folk medicine and superstition written by John Gerard. Domestic handbooks like Thomas Hill’s “Profitable Arte of Gardening” (1568) were more artful than horticultural.

“A lot of the time when they write about gardening,” Ms. Wall said, referring to authors like Hill, “they’re writing about the ancient Greeks” or Romans — that is, beliefs and ideals that dated back to Pliny the Younger.

Actually growing “herbs” to feed a New England household was anything but a scholarly pursuit. The average kitchen garden was about an acre, the historian James E. McWilliams wrote in a monograph titled “ ‘To Forward Well-Flavored Productions’: The Kitchen Garden in Early New England,” from the March 2004 issue of The New England Quarterly. Hired help was practically nonexistent. Given the abundance of land, settlers had their own acres to harvest. And men were preoccupied with tending livestock and sowing grains.

That meant “this arduous task fell almost entirely to women,” Mr. McWilliams wrote. Then, as now, raised beds were standard. The soil needed to be improved, Mr. McWilliams noted: “stirred,” loosened and loaded with dung. A garden often would include an orchard of fruit trees, like apples, pears, quince and plums. And these required their own pruning and picking.

Ms. Wall has tried this kind of labor for herself in the recreated gardens outside each of the 12 historical dwellings at Plimoth Plantation. “I’m a housewife of perpetual visitation,” she said. “I travel between houses and help people.”

After 30 years at the museum, Ms. Wall is past complaining about the period costumes. But going without glasses, as most 17th-century women did, is an abiding nuisance. “It’s really hard for me to put seed in without having my nose in the ground,” she said. And weeds “have to grow large enough that I can tell them from my plants.”

It doesn’t help matters that many Colonial-era “herbs,” like dandelions or patience dock (Rumex patientia), would now be tarred as weeds. Burnet (Sanguisorba officinalis), one of Ms. Wall’s favorites, can be found growing by the side of the road.

The plant has a tireless quality. The flowers, typically maroon, will bloom all summer if you keep picking them, she said. And the little leaves of salad burnet (Sanguisorba minor) can be harvested almost all year.

“Why is this something that doesn’t show up in all these salad mixes?” she said.

Burnet turns up on a list of 59 seeds that John Winthrop Jr., a future governor of the Colony of Connecticut, ordered in 1631 from a London grocer, Robert Hill. And herbals widely recommended burnet, with its cucumber-like flavor, for doctoring wine after long sea voyages. “I dare say a lot of that wine needed help,” Ms. Wall said.

Yet burnet fell out of favor. For all her research, Ms. Wall has yet to answer the question of what makes something fashionable.

A case study, she said, could be smallage (Apium graveolens). The biennial plant grows a stalk like celery, but thicker and taller. And for 300 years — in between “medieval English cookery” and the “18th century,” Ms. Wall said — it displaced celery in cookbooks.

She discovered why after she and the head Plimoth horticulturist conducted a long quest for smallage, and she finally grew out the seeds herself.

“I was making potato salad,” she said, “and I didn’t have any celery. Then I realized, I have smallage. And in potato salad, it was heaven.”

And then there are the historical plants whose disappearance is no cause for mourning. A good riddance goes out to the root crop skirrets (Sium sisarum), said Clarissa Dillon, 77, who practices historical cooking and gardening at the 1696 Thomas Massey House in Marple Township, Pa.

“ ‘They are something windie, by reason whereof they also provoke lust,’ ” Ms. Leighton wrote, quoting John Gerard’s herbal. “ ‘The women in Susula ... prepare the roots for their husbands, and know full well wherefore and why.’ ” (If ardor persists for more than four hours, call your physician.)

It’s no great challenge coaxing a bunch of skirrets to fill the yard. The horticulturist who started Dr. Dillon on skirrets “did not tell me how enthusiastic the seeds are,” she said. “And I have them everywhere.”

A cook needs an awful lot of plants to yield more than a teaspoon of roasted pulp. The edible root “is supposed to be the size of a man’s thumb,” Dr. Dillon said. But “my skirrets tend to be, as a friend said, the size of her dog’s toenails.”

And these toenails need to be peeled, too. “What’s really awful,” Dr. Dillon added, is the “wire” that runs through another forsaken and fast-spreading root crop, scorzonera (which botanists know as Scorzonera hispanica and civilians call viper’s grass). This core runs through the center of the root and must be removed. Far easier, she said, is to substitute parsnips, which are bigger, sweeter, better.

Gerard had his notions of why a woman would favor skirrets in the kitchen (and the bedroom). But Dr. Dillon wrote her dissertation on women and 18th-century kitchen gardens in eastern Pennsylvania, while she was teaching elementary school and raising a child. The experience helped her formulate a rule about why a taxing plant like skirrets might fall into the compost heap of history.

“Women don’t make work for themselves,” Dr. Dillon said. “They have enough to do.” 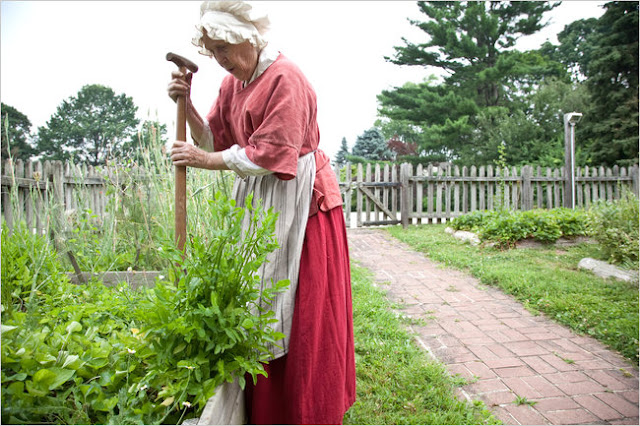 A PACKET of 250 purslane seeds costs about $3.60 from Seeds of Change, (888) 762-7333 or seedsofchange.com. Not a bad price, though it may be 249 purslane seeds too many. Like a lot of the “sallet” greens that the colonists brought with them to the New World, purslane (Portulaca oleracea) can colonize a yard all on its own.

A single specimen can produce a million seeds. Let a purslane patch go, said Clarissa Dillon, a food and garden historian, and “it’s the plant that eats your driveway.”

“It will come up through asphalt,” she said.

You can spray the thick red stem and the sprawling oval leaves with weed killer, Dr. Dillon added, which is what most gardeners do. Or you can pickle the whole plant with “equal parts vinegar and stale beer,” which is what she prefers.

Dr. Dillon recommends blanching the purslane first for a quick three-count. “I don’t want it to be limp,” she said. She learned this preparation from a “receipt” (that is, a recipe) in her 1750 edition of “The Compleat Housewife: Or Accomplish’d Gentlewoman’s Companion.”

Tricks like these were once common knowledge among kitchen gardeners, said Joel Fry, the curator at Bartram’s Garden in Philadelphia, which dates from 1728. “One of the reasons they’ve disappeared,” he said of some colonial-era food plants, “is we don’t know what to do with them.”

Dr. Dillon learned a method for removing the stringy core from scorzonera. Overbaking the root crop for a few minutes can make the “wire” less unwieldy. There’s only one way to find out if it’s worth it: Fedco Seeds, fedcoseeds.com or (207) 873-7333, lists a 1/8-ounce packet for $1.30. (A trial packet of smallage, available under the name Afina Cutting Celery, is even cheaper at just 90 cents.)

Fedco sold out of skirret seed this spring. But Amishland Heirloom Seeds offers a packet of 20 seeds for $2.50; amishlandseeds.com.

The sallet green Good King Henry (Chenopodium bonus-henricus) can be found at Fedco as well. And to the long list of aliases for the plant, Fedco adds Lincolnshire spinach and goosefoot.

Like goosefoot (and goose itself), the gooseberry (Ribes hirtellum or uva-crispa) seems to have dropped off the nation’s menu at least a century ago. The cause was no mystery: federal authorities started to quarantine and eradicate the thorny shrub in 1917 to limit the spread of white pine blister rust. In 2003, New York State finally legalized the gooseberry and its close cousin, the red currant. (Sales of gooseberry and various currant shrubs remain restricted in a cluster of Eastern states, including parts of New Jersey.)

Hardy gooseberries were native to the New World. But that didn’t stop the English from importing their own varieties, said Kathleen Wall, a historical culinarian. These plants bore bigger, sweeter fruit. They also died in the warmer climate. Raintree Nursery, raintreenursery.com or (800) 391-8892, sells a dozen cultivars (most for $11.50), including a few American gooseberries that have a resistance to powdery mildew.

The English never lost their taste for gooseberries, Ms. Wall said, but colonial gardeners were typically pragmatic. When a tart called for small, sour fruit, they looked to the yard and started cooking with cranberries..
at 4:00 AM