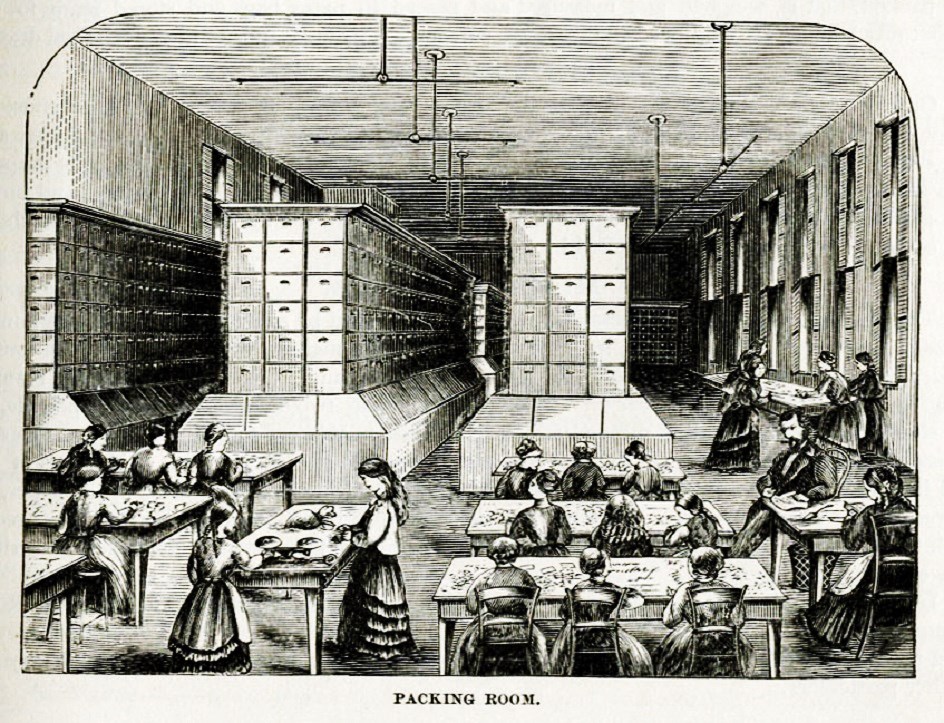 The Employments of Women: A Cyclopaedia of Woman's Work by Virginia Panny Published Walker, Wise & Company, 1863

"In a seed store in Philadelphia, we found, they employ women in January and February, at $2.50 a week, to put seeds up in paper bags, seal them, and paste labels on. They go at eight in the morning, and remain until dark.

"At a large drug store in Philadelphia, we were told they employ nine women. They have seven distinct branches for the women, and separate apartments for each branch, consisting of weighing and putting up powders, sorting herbs and roots, putting up liquids, &c., &c. The women earn from $3 to $5 a week, and spend nine hours, from eight to six, having an hour at noon. In busy seasons they remain till eight or nine, and receive additional wages. There is nothing unhealthy in the business. They are paid $3 a week from the time they are taken to learn, and deduction made for absence.

"A seller of botanic medicines in Boston writes me: “He employs women in putting medicines in small packages for the retail trade, bottling the same, and labeling. He pays $5 a week to his women, and $3 a week while learning, the time for which is six months. Common sense, neatness, and integrity are the qualifications needed. The girls work from nine to ten hours. He will not employ any but American women. He pays men $8 or $9, because they can take them off, and put them upon work that girls cannot do. Women would be paid better if they were stronger, and did not need so much waiting upon in the way of lifting and arranging their work. Rainy days they want to stay at home, or, if they come, it takes half a day for them to dry their clothes. Men they can depend on in all weather. Women might keep their books, if their crinoline was not too extensive: that alone would bar them from the counting room. Women are inferior only in physical disabilities. Girls are good for nothing until after sixteen years of age; and nine in ten will get married as soon as they are fairly initiated in workhence the time spent by women in acquiring a business education is to a certain extent lost—lost to their employers, but of assistance to them in the education of their children.”

"Mr. P., botanic druggist says: “There are but three establishments in New York, for this business, and twelve women would be quite enough for them. They put up herbs in packages. One day's practice is enough for a smart person. The women are paid from $3 to $5 a week.”

"At the United States Botanic Depot they employ one girl, and pay her $4 a week. She only works in daylight. Mr. J. L. employs two girls to put up botanic medicines. He has men to cork the bottles. They work ten months in the year. Nothing is done in December and January. They pay $4 a week, of ten hours a day.

"In Louisville, St. Louis, and Cincinnati, few women are employed in this way. Some seedsmen and florists near Boston employ four ladies in enveloping seed. One of the ladies writes: “ We presume more ladies are employed in Europe to put up seed than in this."