A dovecote is a practical, and often ornamental, building intended to house pigeons or doves. Dovecotes in America were also called pigeon-houses and culver houses. Doves were kept in early America for the same reasons they had been kept for centuries - for their eggs, their meat, and their dung used as fertilizer. Dovecotes in America usually were either rectangular or circular free-standing structures or built into the end or top of a house or barn, often containing pigeonholes, in which tasty doves would nest.

The term culver-house originated from the old English terms culfre or colver which had their origins in the Latin columba. In Rome, a dovecote was called a columbarium. In early English, Hus or haus meant house, and cote referred to a small building housing animals.

In colonial and early America, dovecotes appeared from New England into the deep South, although they are more often mentioned from the Mid-Atlantic region southward.

Moreau de St Mery noted in his 1793-1798 American Journey on May, 1794, that, "There are many dove-cotes in Baltimore, as well as little houses made to shelter swallows, due to the belief that their attachment for a house will bring prosperity to those who live there." Baltimore visitor Richard Parkinson also wrote of dovecotes in his Travels in America in 1798.

During the same period, William Faris noted in his Annapolis diary on March 21, 1798 that “the Pigeon House Blew Down, it was Built in the year 1777.”

John Beale Bordley wrote in his Gleanings from the Most Celebrated Books on Husbandry, Gardening, and Rural Affairs published in Philadelphia in 1803, of the culver, Pigeon or Dove: a Culver House.

As the 19th-century progressed, artist Charles Willson Peale mentioned squabs from his Pennsylvania "Pidgeon House" in 1814. Marylander Martha Ogle Forman also wrote in her diary of her Pigeon House in 1819 and 1823 at her home at Rose Hill.

As late as 1887, R. S. Ferguson wrote in the June Archeological Journal of "an almost forgotten pigeon house or culver house." 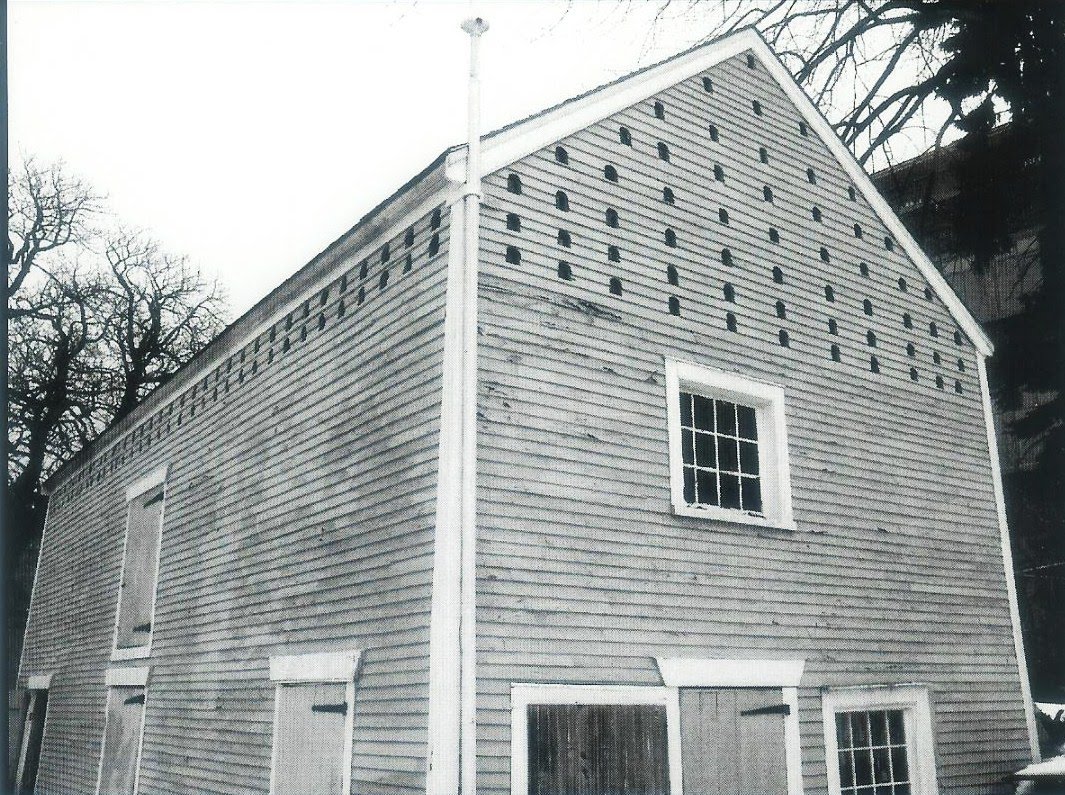 The Romans may have introduced dovecotes or columbaria to Britain, since pigeon holes have been found in Roman ruins at Caerwent. However it is generally believed that doves were not commonly kept there until after the Norman invasion. The earliest known examples of dove-keeping occur in Norman castles of the 12th century (for example, at Rochester Castle, Kent, where nest-holes can be seen in the keep). 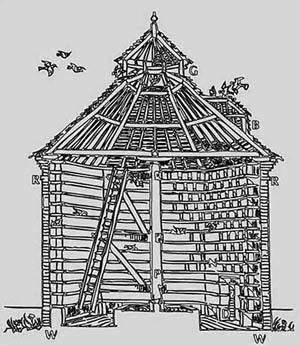 Documentary references to dovecotes in England also begin in the 12th century, when a coluerhouse" is mentioned. The term appears again in 1420, as a "colverhous."  J. Harmar writes in his 1624 Beza's Sermon that the "poor culverhouse sorer shaken." Izaak Walton mentioned a dove-cote in his 1653 Compleat Angler. By 1669, John Webb reported that in the north of England, a dove house was called a dove-cote and in the south of England it was referred to as a pigeon-house. Nathan Bailey wrote in his Dictionarium Rusicum "old Word for a Pigeon of Dove, and theance Culver-House." By 1735, The Sportsman's Dictionary from London, reported the term
Cluver House. 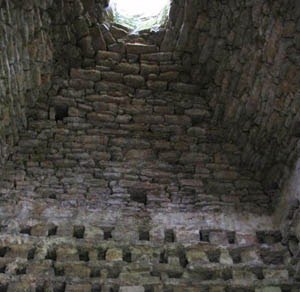 The oldest known dovecotes are the fortified dovecotes of Upper Egypt, and the domed dovecotes of Iran. In arid regions, the droppings were in great demand as fertilizer. In Medieval Europe, the possession of a dovecote was a symbol of status and power and was regulated by law. Only nobles had this special privilege which was often referred to as droit de colombier. This property right lasted until the 18th-century in England. 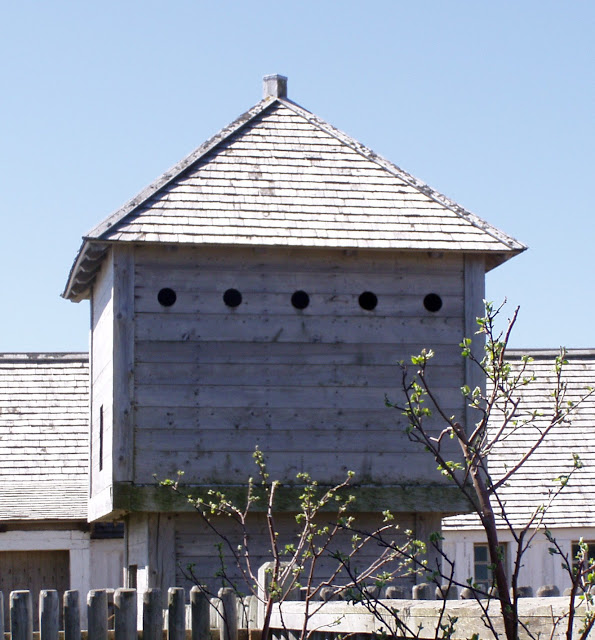 Dovecotes were built by the Romans, who knew them as Columbaria. They seem to have introduced them to Gaul. The presence of dovecotes is not noted in France, before the Roman invasion of Gaul by Caesar. The pigeon farm was, by then, a passion in Rome. The Roman columbarium , generally round, often had its interior covered with a white coating of marble powder. Varro, Columella, and Pliny the Elder wrote works on pigeon farms and dovecote construction. 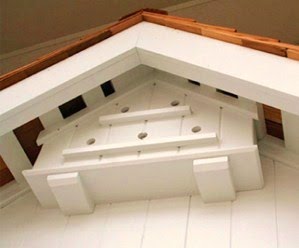 To ensure the safety of their edible doves, owners tried to locate their dovecotes away from large trees, which might house raptors, such as hawks, eagles, and owls, and shielded their dove houses from prevailing winds. Owners usually constructed their dovecotes with tight access doors and smooth walls with a protruding band of stones (or other smooth surface) to prohibit the entry of climbing predators such as rats, cats, and squirrels. The exterior facade was sometimes coated by a horizontal band, in order to prevent their ascent. In colonial America, Landon Carter wrote in 1764 that, "Colo. Tayloe's Ralph (was) sent back here to cut my dishing capstones for my Pigeonhouse posts to keep down the rats."
br /> 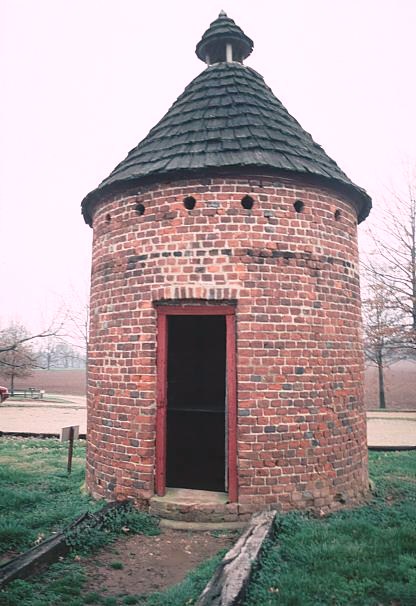 Dovecote at Shirley Plantation in Virginia

Dovecotes can be extremely diverse in construction materials, shape, and dimension. The square dovecote with quadruple vaulting was built before the 15th century such as the examples at Roquetaillade Castle in Bordeaux or Saint-Trojan near Cognac. The cylindrical tower appeared between the 14-16th centuries covered with curved tiles, flat tiles, stone roofing, and an occasional dome of bricks. The dovecote sitting on brick, stone, or wooden pillars, either cylindrical, hexagonal, rectangular, or square in form was common in early America. Some pigeonholes were built-in as a part of a house or barn or other outbuilding,  or they were attached as a lean-to dovecote structure against the sides of buildings. The interior of a dovecote might contain pigeonholes large enough for a pair of doves. Usually a ladder was located in the interior of large dovecotes for the collection of eggs or squabs and for maintenance. 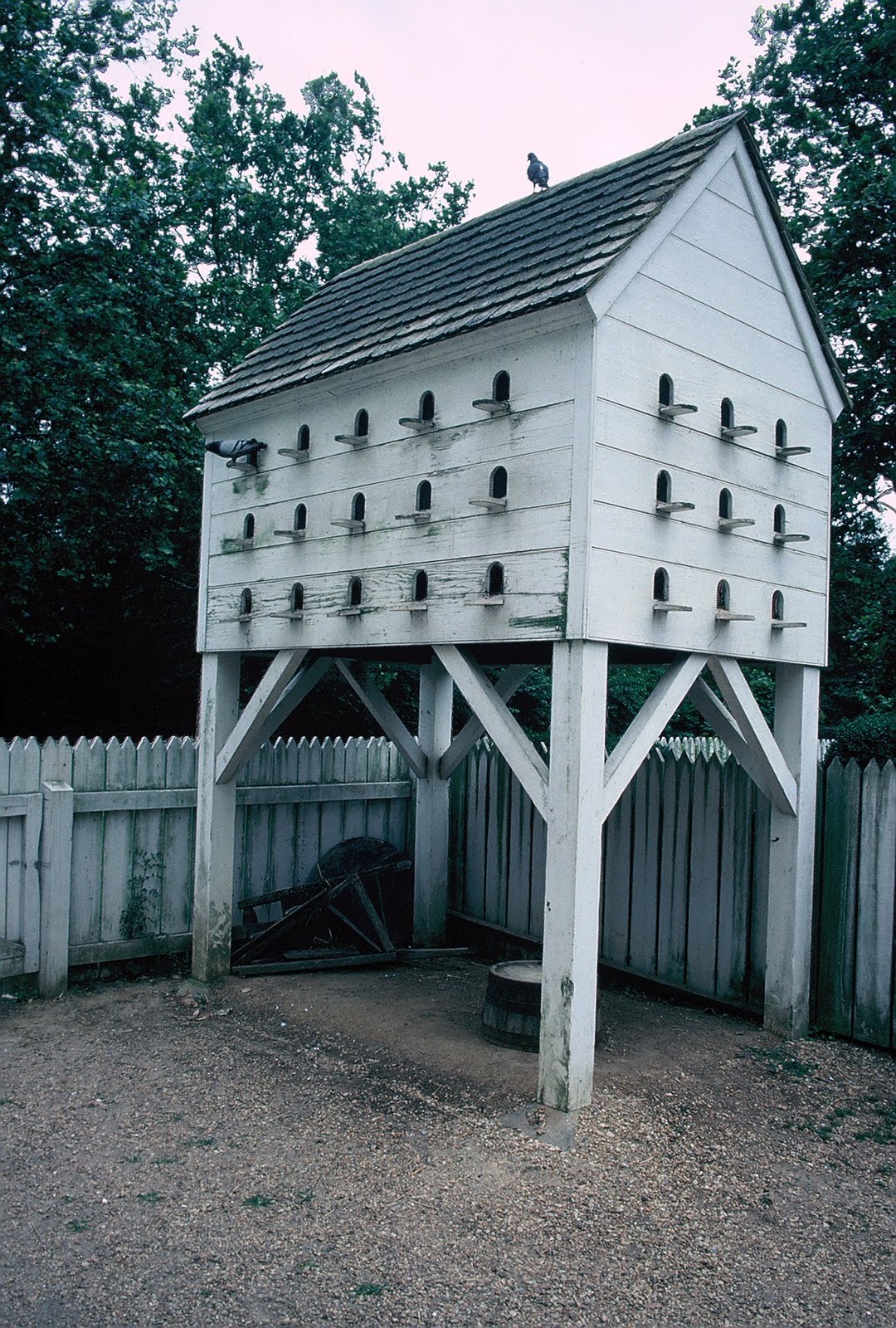 Dovecote in Williamsburg, Virginia Photo by Karen Stuart of the Library of Congress
at 4:00 AM