South Carolina - Plants for the Table - Slaves & Rice in Georgetown

"The intricate steps involved in planting, cultivating, harvesting, and preparing rice required an immense labor force. Planters stated that African slaves were particularly suited to provide that labor force for two reasons: 1) rice was grown in some areas of Africa and there was evidence that some slaves were familiar with the methods of cultivation practiced there, and 2) it was thought that the slaves, by virtue of their racial characteristics, were better able than white laborers to withstand the extreme heat and humidity of the tidal swamps and therefore would be more productive workers. Rice cultivation resulted in a dramatic increase in the numbers of slaves owned by South Carolinians before the American Revolution. "In 1680, four-fifths of South Carolina's population was white. However, black slaves outnumbered white residents two to one in 1720, and by 1740, slaves constituted nearly 90% of the population. Much of the growing slave population came from the West Coast of Africa, a region that had gained notoriety by exporting its large rice surpluses. 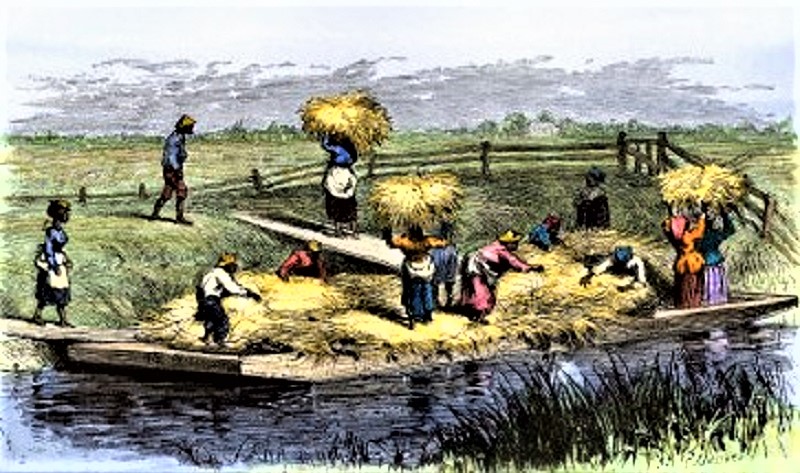 "While there is no consensus on how rice first reached the American coast, there is much debate over the contribution of African-born slaves to its successful cultivation. New research demonstrates that the European planters lacked prior knowledge of rice farming, while uncovering the long history of skilled rice cultivation in West Africa. Furthermore, Islamic, Portuguese, and Dutch traders all encountered and documented extensive rice cultivation in Africa before South Carolina was even settled. 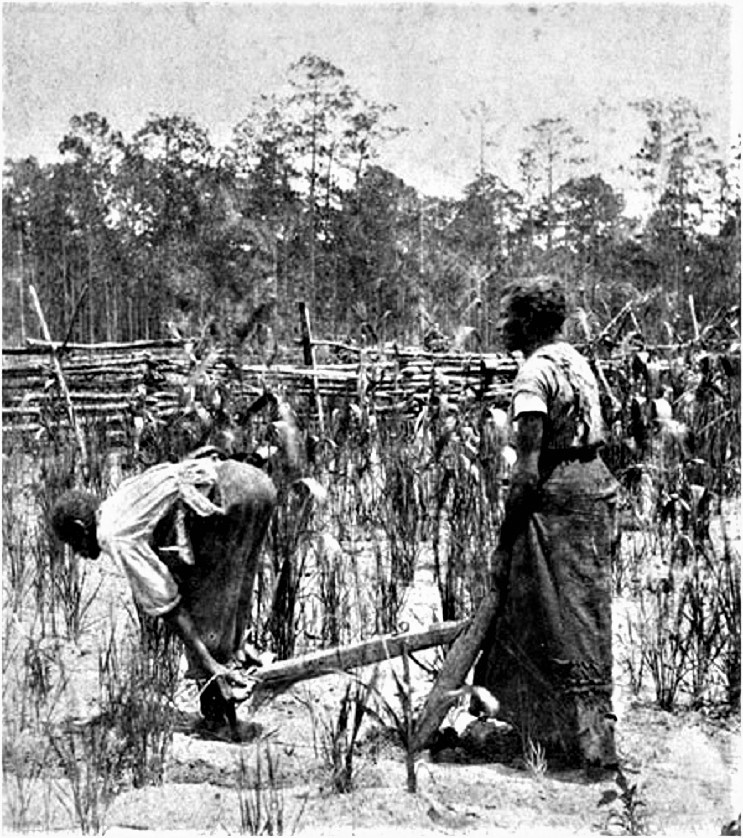 "At first rice was treated like other crops, it was planted in fields and watered by rains. By the mid-18th century, planters used inland swamps to grow rice by accumulating water in a reservoir, then releasing the stored water as needed during the growing season for weeding and watering. Similarly, prior records detail Africans controlling springs and run off with earthen embankments for the same purposes of weeding and watering.

"Soon after this method emerged, a second evolution occurred, this time to tidewater production, a technique that had already been perfected by West African farmers. Instead of depending upon a reservoir of water, this technique required skilled manipulation of tidal flows and saline-freshwater interactions to attain high levels of productivity in the floodplains of rivers and streams. Changing from inland swamp cultivation to tidal production created higher expectations from plantation owners. Slaves became responsible for five acres of rice, three more than had been possible previously. Because of this new evidence coming to light, some historians contend that African-born slaves provided critical expertise in the cultivation of rice in South Carolina. The detailed and extensive rice cultivating systems increased demand for slave imports in South Carolina, doubling the slave population between 1750 and 1770. These slaves faced long days of backbreaking work and difficult tasks. 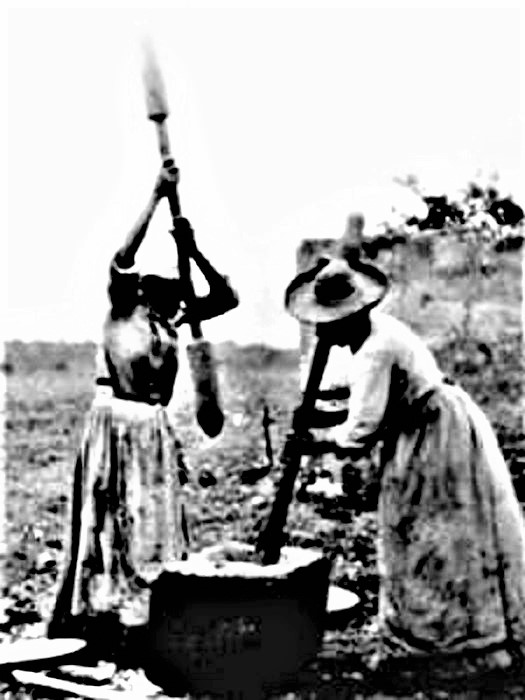 "A slave's daily work on an antebellum rice plantation was divided into tasks. Each field hand was given a task--usually nine or ten hours' hard work--or a fraction of a task to complete each day according to his or her ability. The tasks were assigned by the driver, a slave appointed to supervise the daily work of the field hands. The driver held the most important position in the slave hierarchy on the rice plantation. His job was second only to the overseer in terms of responsibility. 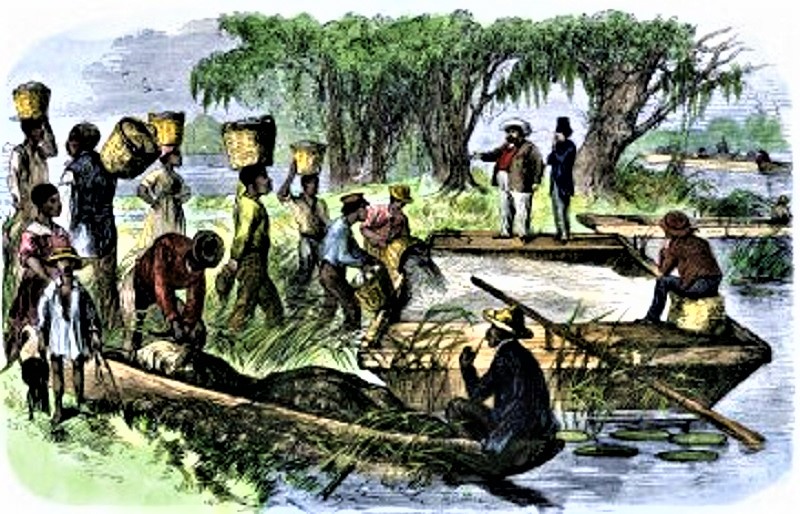 "The driver's job was particularly important because each step of the planting, growing, and harvesting process was crucial to the success or failure of the year's crop. In the spring, the land was harrowed and plowed in preparation for planting. Around the first of April rice seed was sown by hand using a small hoe. The first flooding of the field, the sprout flow, barely covered the seed and lasted only until the grain sprouted. The water was then drained to keep the delicate sprout from floating away, and the rice was allowed to grow for approximately three weeks. Around the first of May any grass growing among the sprouts was weeded by hoe and the field was flooded by the point flow to cover just the tops of the plants. After a few days the water was gradually drained until it half covered the plants. It remained at this level--the long flow--until the rice was strong enough to stand. More weeding followed and then the water was slowly drained completely off the field. The ground around the plants was hoed to encourage the growth and extension of the roots. After about three weeks, the field was hoed and weeded again, at which time--around mid-June or the first of July--the lay-by flow was added and gradually increased until the plants were completely submerged. This flow was kept on the field for about two months with fresh water periodically introduced and stagnant water run off by the tidal flow through small floodgates called trunks. 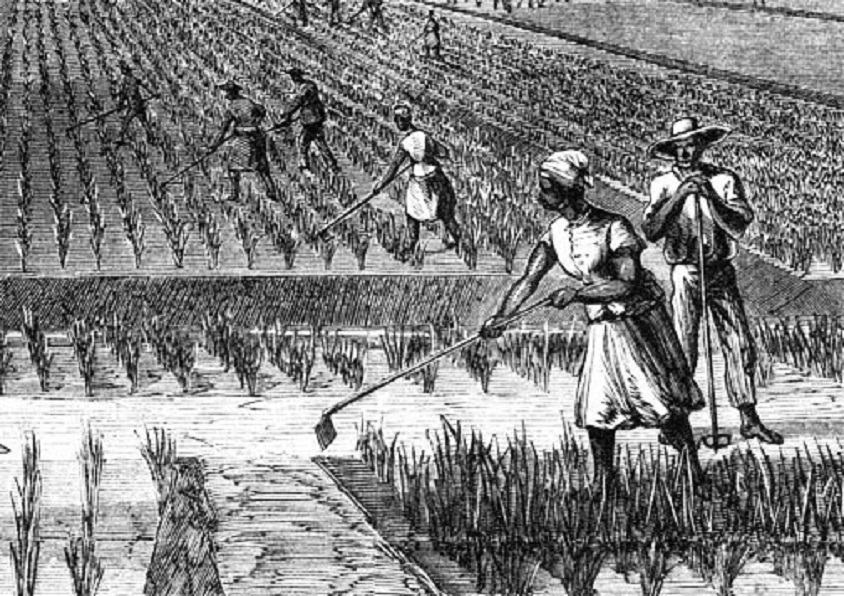 "Rice planted in the first week of April was usually ready for harvesting by the first week of September. After the lay-by flow was withdrawn, just before the grain was fully ripe, the rice was cut with large sickles known as rice hooks and laid on the ground on the stubble. After it had dried overnight, the cut rice was tied into sheaves and taken by flatboat to the threshing yard. In the colonial period, threshing was most often done by beating the stalks with flails. This process was simple but time consuming. If the rice was to be sold rough, it was then shipped to the agent; otherwise, it was husked and cleaned--again, usually by hand. By the mid-19th century most of the larger plantations operated pounding and/or threshing mills which were driven by steam engines. After the rice had been prepared, it was packed in barrels, or tierces, and shipped to the market at Georgetown or Charleston. In 1850 a rice plantation in the Georgetown County area produced an average yield of 300,000 pounds of rice. The yield had increased to 500,000 pounds by 1860."