Blooming Today in the Mid-Atlantic - Bloodroot 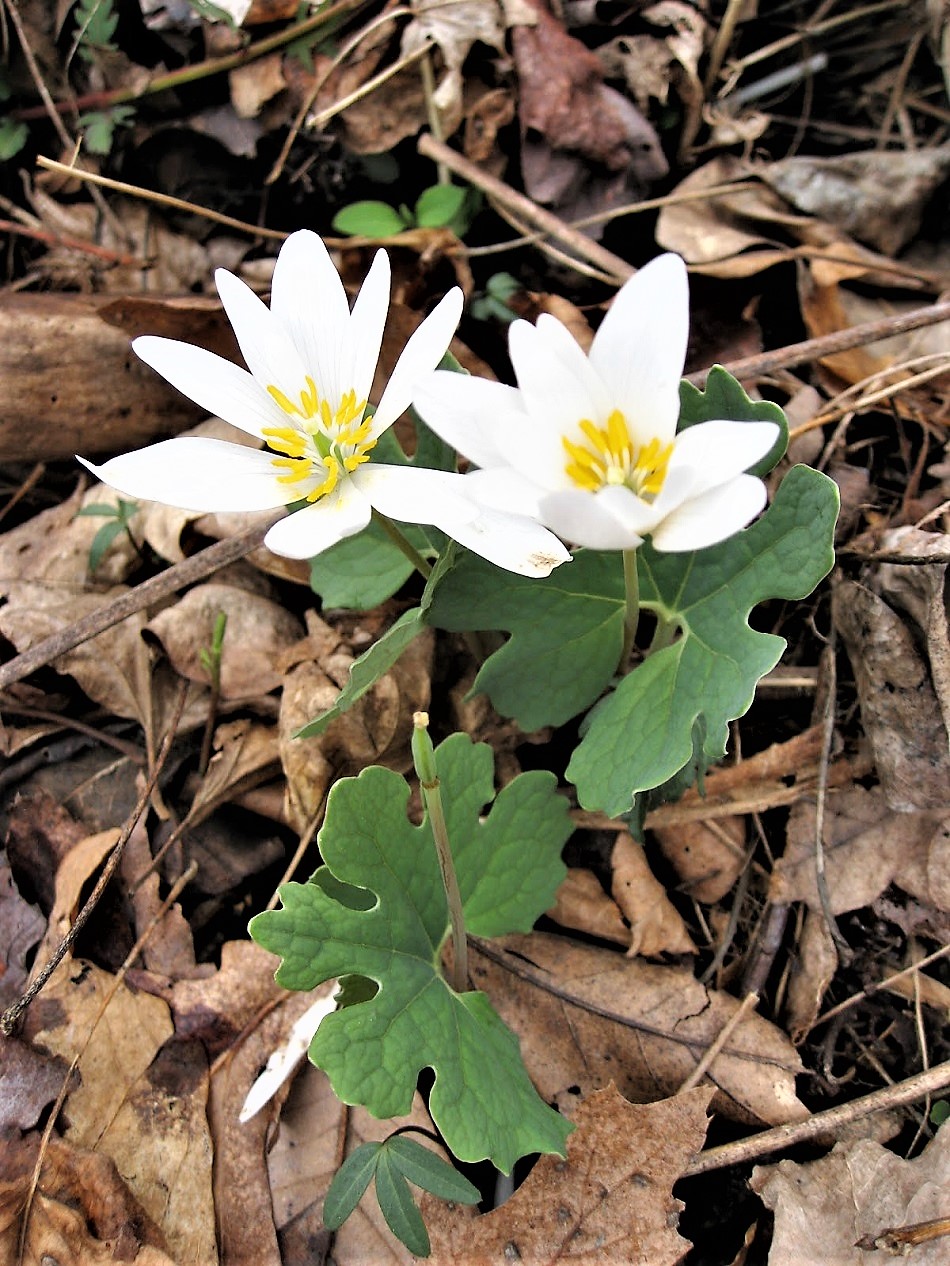 Bloodroot, An Ephemeral With Many Traits
Article & Photos by Capital Naturalist, Alonso Abugattas

Bloodroot (Sanguinaria canadensis) goes by a variety of common names due its many different uses & properties: Red Indian Paint, Redroot, Puccoon (Virginia Algonquian Indian for "blood"), Sangdragon, Coonroot, Sweet Slumber (for its narcotic properties), Snakebite (for its bitter taste), Turmeric, Papoose Flower (for the way the emerging leaf wraps around the bud), & Tetterwort (for its use in treating skin disorders, or tetters). It is the only member of its genus Sanguinaria (which again refers to the bloody color of its sap).

Bloodroot is one of the earliest spring ephemeral plants, blooming well before the trees leaf out & then disappearing underground until the following year. The flowers are equally fleeting, with the petals falling off easily in wind or rain, rarely lasting more than a few days at most.  They are lovely, if short lasting, but their attractiveness is a bit shallow. They actually have no nectar to offer pollinators, only pollen, so a few insects are either tricked into pollination, though some others can use the pollen. This, along with their short-lived flowers & their early bloom time when there are few insects out, would be a problem were it not that the flowers can be self pollinating (autogamy). The seeds produced are primarily distributed by ants (this is called Myrmecochory. Some believe that without ants dispersing the seeds, the plant would not be very successful. In fact, experiments run by local botany guru Marion Lobstein, showed that Bloodroot seeds who had their elaisomes removed had a much higher germination rate than those who did not. Since the ants remove the elaisomes in order to feed on them (as well as planting the seeds underground & dispersing them), this helps explain their success.

Among the various human uses for Bloodroot, the most prominent was as a dye. All parts of the plant have a blood-like sap that can be toxic. This colorful plant juice was used by indigenous tribes for dyeing a variety of things, including as a face/body paint. Some even think the term "redskin" may have partially come from this usage by various tribes. It is believed that this toxicity led to its indigenous use as a bug repellent, with insects & ticks thus having to come in contact with the chemicals on their skins before being able to feed. Some people can have an allergic reaction to the toxic sap however. Colonists felt much safer using it to dye wool instead.

The plant's chemical properties made for various medicinal practices as well. It has been utilized especially for blood disorders, menses, during childbirth, & to cause abortions, often due to the belief that its blood-red color somehow signaled these uses (a concept called the Doctrine of Signatures, that a sign was provided on a plant by a higher power as to what the plant could treat). Bloodroot has also been used for rheumatism, as a fever reducer, vomit inducer, cough suppressant, to kill ringworms, rid warts, & to treat fungal infections. The Abnaki people even used it to cause abortions in horses. During the Civil War, Southern doctor Francis Porcher was tasked with finding substitute plants to use for items no longer available due to Northern blockades. The Confederacy listed Bloodroot as part of their ethnobotanical arsenal for many breathing disorders & to induce vomiting, among other applications... 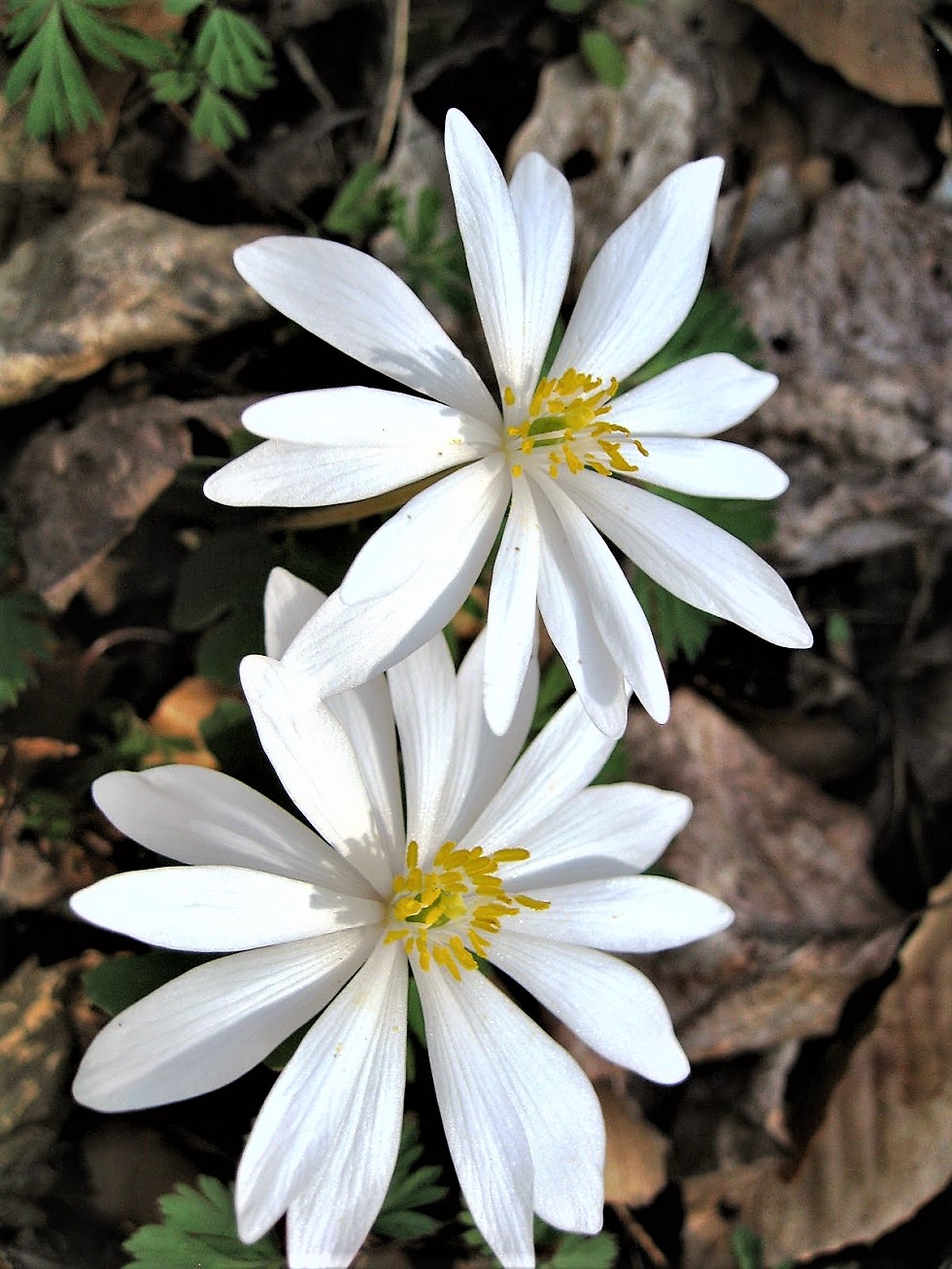 Now a days, few people use Bloodroot for much of anything except to admire its fleeting beauty. In fact, it is easy to overlook except in the early spring when its white flowers make their appearance for the briefest of time. So get out there & enjoy them while they last.
at 4:30 AM