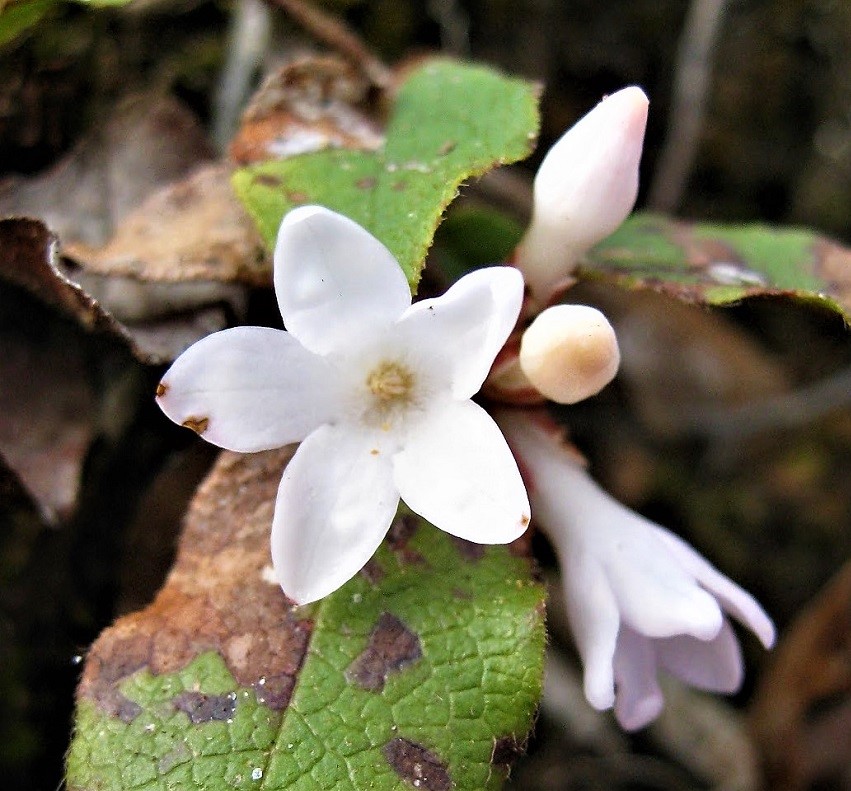 Trailing Arbutus is also referred to as Plymouth Mayflower, or just Mayflower. Since it is one of the first plants to bloom, well before May, the name is actually derived from a legend. It is said that the first bloom the pilgrims trying to settle in Plymouth in 1621 saw was this plant, whom they named after their ship. This member of the Heath family (Ericaceae) is also sometimes called Winter Pink, Mountain Pink, Gravel Plant, or Shadflower (supposedly blooming in time with the influx of migrating shad fish).

Although this plant has leathery evergreen leaves, it is best known from its small clusters of 5-petaled white or pink flowers. These often bloom in March through April & are very fragrant. They hold good supplies of nectar, enough to lure bumblebee queens (their primary pollinators) into looking for them even if they are sometimes covered in leaves. If a bumblebee is able to find 2 flowers of different sexes & pollinate them, then a berry-like capsule is formed. The seeds they contain are very attractive to ants who act as the main seed dispersers.

The flowers are said to be edible & quite tasty, but the plant is getting so rare, that to eat them is a shame, & an actual crime in some areas. I've never tried to taste one. But Trailing Arbutus has been used by people for more than just food in the past. The Algonquian Quebec tribes used a leaf infusion to treat kidney ailments. It turns out that the leaves do contain a substance called arbutin that has been used medicinally to treat kidney stones & urinary tract disorders.  The Cherokee also made use of the plant, to treat abdominal pain, induce vomiting, treat diarrhea, indigestion, in addition to kidneys. The Haudenosaunee (sometimes called the Iroquois) thought it could be used for labor pains, rheumatism, kidney issues, & indigestion. For the Potawatomi, it was a sacred tribal flower. 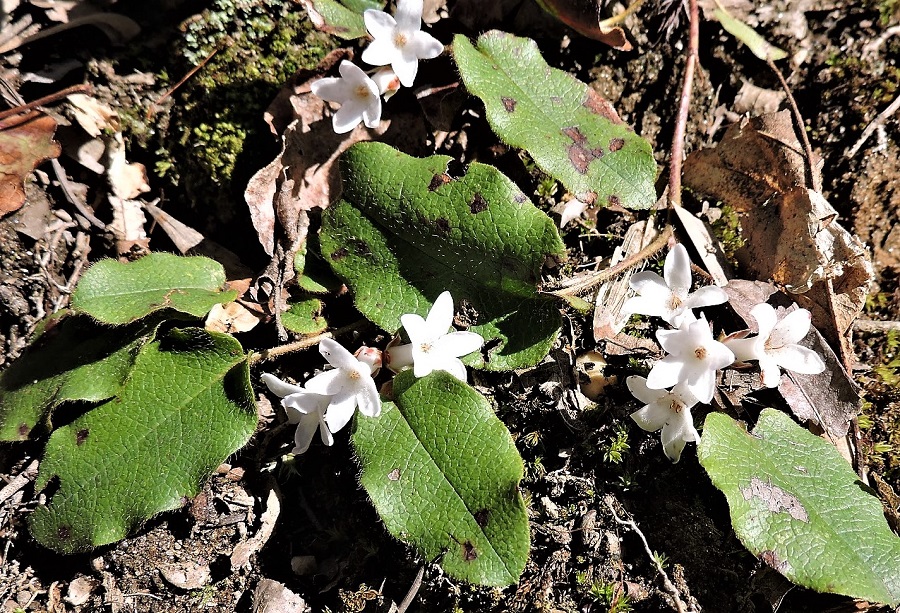 So there's a lot to this little woodland creeper, though it gets harder to find every year. Though sometimes sold commercially, please make sure that it is not collected from the wild. If its is disturbed, the symbiotic fungal relationship is usually broken & the plant soon dies. So please never remove it from the wild. If you are lucky enough to find it, enjoy its beauty & fragrance, it is well deserving of being the floral emblem of Nova Scotia & state flower of Massachusetts.
Posted by Barbara Wells Sarudy at 3:00 PM