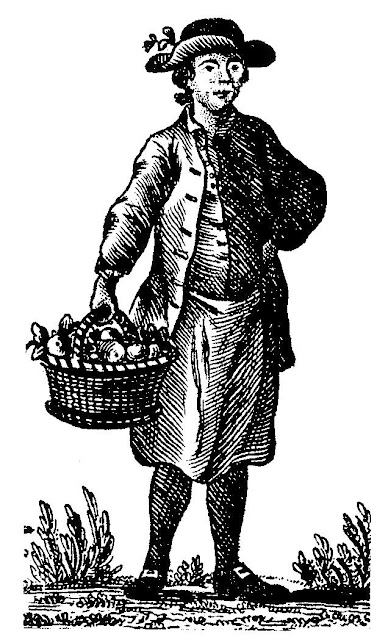 One of the earliest treatises on gardening in America was written by John Randolph around 1765 in Williamsburg, Virginia.

A General Calendar for Work in the Kitchen Garden

JANUARY.
Prepare hot-beds for Cucumbers; as little can be done this month in a garden, I would advise the preparing of your dung, and carrying it to your beds, that it may be ready to spread on in February.

FEBRUARY.
Sow Asparagus, make your beds and fork up the old ones, sow Loaf Cabbages; latter end transplant Cauliflowers, sow Carrots, and transplant for seed; prick out endive for seed, sow Lettuce, Melons in hot-beds, sow Parsneps take up the old roots and prick out for seed, sow Peas and prick them into your hot-beds, sow Radishes twice, plant Strawberries, plant out Turneps for seed, spade deep and make it fine, plant Beans.

APRIL.
If Artichokes were not slipped last month, do it this, plantTiushel and garden Beans, sow Cabbages the twelfth, sow Cauliflowers, Celery, Cresses, Nasturtium, Lettuce, Peas, Radishes twice; Sage will grow in this or any other month; Turneps, sow Salsify early, Pepper; turf this month.

JUNE.
Cabbages should be sown, sow Radishes twice, transplant Cabbages, prick out Cauliflowers, prick out Brocoli, draw up by the roots all your weeds.

NOVEMBER.
Take up your Cabbages, sow Cabbages, take up your Cauliflowers, such as are flowered, and house them, take up your Carrots, trench all your vacant land, prune your trees and vines, plant out every thing of the tree or shrub kind, that has a root to it: if any thing is done to your Artichokes, this is a good month; plant Box; turf early.

DECEMBER.
Cover your Endive with brush, cover Celery, and every thing else that needs shelter; if the weather will admit, turn over the ground that is trenched, in order to mellow and pulverize it. Whatever will prevent delay, and enable you to begin spading in February, should be done this month.

John Randolph was born about 1728, probably at the Peyton Randolph House on Market Square in Williamsburg. After he attended the College of William & Mary for his basic education, he traveled to London in 1745, to study law at the Middle Temple at the Inns of Court in London, returning to Williamsburg to practice law in 1749. During his years in Williamsburg, he became a member of the city's common council, & a burgess for the College of William & Mary. When his older brother Peyton Randolph was elected speaker of the House of Burgesses, John succeeded him as the royal colony's attorney general.

As the sentiment for separating from mother England grew, Randolph’s brother Peyton Randolph became chair of the Continental Congress, & loyalist John Randolph made plans to sail for England. He wrote a farewell letter to his cousin Thomas Jefferson. "We both of us seem to be steering opposite courses," he said, "the success of either lies in the womb of Time." John Randolph arranged passage across the Atlantic for himself, his wife, Ariana, and their 2 daughters, Susannah and Ariana. His son Edumund, who did not share his father's loyalist sentiments, joined the American army serving as aide-de-camp to General George Washington.

John Randolph died at Brampton, England, in 1784. His death brought his return to America.  He is interred beside his father and brother in the family vault in the chapel at the College of William and Mary in Williamsburg.
at 4:00 AM