Records indicate that independent professional gardeners plied their trade much earlier in publicly-owned gardens than in the gardens of the gentry in the Chesapeake. While laborers in one form of bondage or another maintained most privately-owned Mid-Atlantic & Upper South pleasure gardens, the church & state often used independent professionals to supervise the planting efforts of slaves & servants well before the War for Independence.

In Virginia early in the century, a succession of professional gardeners, who were not serving under an indenture, worked at institutions of the royal government in Williamsburg, including the Governor’s Palace & the College of William & Mary. 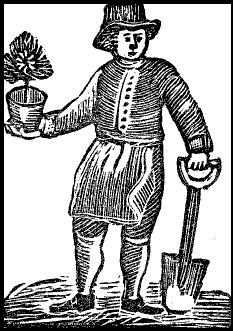 Some of these professional gardeners held pristine credentials. James Road, an assistant to George London, Royal Gardener to King William & Queen Mary, was sent to Virginia in 1694, to collect plants for shipment back to Hampton Court Palace. He also probably to laid out the earliest gardens at the new college in Williamsburg. London had served as a gardener at Versailles and had traveled to Holland to study their smaller flower gardens, as well.

It is likely that James Road's supervising gardener George London(1681-1714) actually drew up the plans for the gardens at the College of William & Mary. Virginia planter John Walker wrote to John Evelyn in 1694. He received a reply to his particular query in May of 1694, in which Eveyln wrote, "Mr. London (his Majs Gardner here) who has an ingenious Servant of his, in Virginia, not unknown I presume to you by this time; being sent thither on purpose to make and plant the Garden, designed for the new Colledge, newly built in yr Country." The servant was London's assistant at Hampton Court, James Road.

The College, which was formally established by Royal Charter in 1693, began as a 330-acre tract of land purchased from Col. Thomas Ballard. William & Mary's first chancellor was Henry Compton, bishop of London. He was a serious gardener & horticulturalist who helped train George London to become a gardener.

Upon James Road's return to London, he was followed by Richard Hickman. Soon after Hickman's appointment, the records indicate that Thomas Creas or Crease (c1662-1757) was paid to assist Hickman in getting the gardens in order. After that, only Crease's name was associated with the ongoing management of the gardens at the Governor’s Palace for an unusually long tenure, from 1726, until he died in 1756.

It is unclear whether the new gardener was born, and perhaps trained, in the England. Some report that Thomas Crease was the head gardener at the Governor's Palace during the administration of Alexander Sportswood who served from 1710-1722. Others claim that Crease came over from England with Governor Hugh Drysdale in 1722. Drysdale was the first Governor to occupy the new "Governor's Palace" in Williamsburg, from 1722-1726.

Others suggest that Crease may have begun his gardening work at Westover, the home of William Byrd II. Byrd refers to a gardener "Tom Cross" in 1720. The same Tom Cross carried at least one letter from Byrd's Williamsburg brother-in-law John Custis during one of his visits to Westover. Byrd, Custis, and Tom Cross/Crease were all accomplished gardeners.

Two years before his appearance in the Governor's Palace records, in 1724, Crease was identified as a "gardener of Williamsburg, married and owning a half acre lot." His house was on the land now supporting the "Taliaferro-Cole" house.

According to York County, Virginia, records Crease married the widow of Gabriel Maupin, Marie Hersent, in 1724. Gabriel Maupin, his wife Marie, and family had sailed to the Huguenot settlement at Manakintown, in Virginia, in 1699-1700, after passing through the Spittalsfield (now Bethnell Green) "suburb" of London in the late 1690s.

Crease began to be "paid for his Service and labourerers in assisting in putting in order the Gardens belonging to the Governor's house" in 1726. He also was "Gardener to the College, in Williamsburg."

In addition to operating a tavern in Williamsburg, Thomas Crease supplemented his income by selling plants. In January 1737, he placed an ad in the Virginia Gazette, "Gentlemen and others, may be supply'd with good Garden Pease, Beans and several other sorts Flower Roots; likewise Trees of several sorts and sizes, fit to plant, as ornaments in Gentlemen's gardens...Thomas Crease--Gardener to the College in Williamsburg."
When Crease died in 1756, his estate was valued at 166.4.3 pounds, and he owned 6 slaves according to his January 1757 inventory. His will, which was proved in York County on January 17, 1757, named a brother Thomas Hornsby & his wife Margaret, and friend Hugh Orr & Catherine, his wife.

James Nicholson, who was born in Inverness, Scotland, sailed to the colony in 1756, to garden at the College of William & Mary. He remained in the position until his death in 1773, at which point he was earning the unusually high salary of 50 pounds a year. The salary probably covered the payments to garden helpers as well.

James Wilson began as college gardener at William & Mary in 1773, after a politically unsuccessful tenure as palace gardener from 1769 through 1771, & he managed to remain at the college as head gardener until 1780.

The royal government appointed its first native-born Virginian, Christopher Ayscough, to the post of head gardener at the Governor's Palace in 1758. When he left the post in 1768, he was earning only 20 pounds annually for his labors.

Immigrant English gardener James Simpson briefly replaced Ayscough at the palace for 16 pounds a year, but either the low wages or the high humidity caused him to beg to return home a scant year later.

John Farquharson, served as the palace’s head gardener, supervising the slaves who did the daily labor, from 1771 until 1781, when the Governor's Palace, by then a military hospital, was destroyed by fire.

Many members of the colonial clergy were sometimes assigned the task of both the ornamental & the practical aspects of gardening for the religious order. Between 1739 & 1765, Father Arnold Livers, a Jesuit priest who was raised in Maryland, kept lists of both his kitchen garden plants & the flowers grown in the parish gardens, as part of his official church records. Sometimes the church employed professional gardeners.

The Society of Jesus occasionally paid independent garden contractors to maintain their kitchen & medicinal botanical gardens. In May 1741, Father James Whitgrave, at Newtown, Maryland , hired William Hues as gardener, his payment to be partially in cash & partially in tobacco.

Gardeners working at public buildings in colonial America usually worked from season to season supervising the work of slave & servant gardeners at a governmental or religious property. At least one, came from England to the colonies to help establish and lay out public gardens in the British American colony Virginia.

When America gained its independence, public contracts for seasonal gardening at churches, colleges, & public buildings surely continued, but records of them are more difficult to find as governmental, educational, & religious institutions grew in number.
Posted by Barbara Wells Sarudy at 4:00 AM