The History and Present State of Virginia, in Four Parts published originally in London in 1705. Beverley, Robert, ca. 1673-1722.

OF THE WILD FRUITS OF THE COUNTRY. 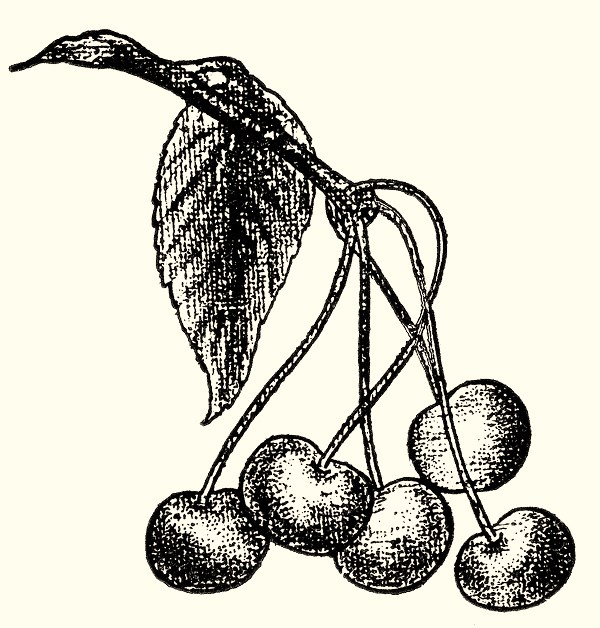 §11. Of fruits, natural to the country, there is great abundance, but the several species of them are produced according to the difference of the soil, and the various situation of the country; it being impossible that one piece of ground should produce so many different kinds intermixed. Of the better sorts of the wild fruits that I have met with, I will barely give you the names, not designing a natural history. And when I have done that, possibly I may not mention one-half of what the country affords, because I never went out of my way to enquire after anything of this nature.

§12. Of stoned fruits, I have met with three good sorts, viz: Cherries, plums and persimmons.

1. Of cherries natural to the country, and growing wild in the woods, I have seen three sorts. Two of these grow upon trees as big as the common English white oak, whereof one grows in bunches like grapes. Both these sorts are black without, and but one of them red within. That which is red within, is more palatable than the English black cherry, as being without its bitterness. The other, which hangs on the branch like grapes, is water colored within, of a faintish sweet, and greedily devoured by the small birds. /The third sort is called the Indian cherry, and grows higher up in the country than the others do. It is commonly found by the sides of rivers and branches on small slender trees, scarce able to support themselves, about the bigness of the peach trees in England. This is certainly the most delicious cherry in the world; it is of a dark purple when ripe, and grows upon a single stalk like the English cherry, but is very small, though, I suppose, it may be made larger by cultivation, if anybody would mind it. These, too, are so greedily devoured by the small birds, that they won't let them remain on the tree long enough to ripen; by which means, they are rarely known to any, and much more rarely tasted, though, perhaps, at the same time they grow just by the houses.

2. The plums, which I have observed to grow wild there, are of two sorts, the black and the Murrey plum, both which are small, and have much the same relish with the damson.

3. The persimmon is by Heriot called the Indian plum; and so Smith, Purchase, and Du Lake, call it after him; but I can't perceive that any of those authors had ever heard of the sorts I have just now mentioned, they growing high up in the country. These persimmons, amongst them, retain their Indian name. They are of several sizes, between the bigness of a damson plum and a burgamot pear. The taste of them is so very rough, it is not to be endured till they are fully ripe, and then they are a pleasant fruit. Of these, some vertuosi make an agreeable kind of beer, to which purpose they dry them in cakes, and lay them up for use. These, like most other fruits there, grow as thick upon the trees as ropes of onions: the branches very often break down by the mighty weight of the fruit.
at 4:00 AM