Landowners Looking for Gardeners in the Mid-Atlantic & South

By the middle of the 18th century, both gardeners searching for employment & gentlemen looking for gardeners began placing ads in local newspapers in hopes of finding one another.

Even though independent gardeners appeared in South Carolina looking for work in the early 1730s, apparently there were not enough to meet the demand. In July, 1736, Robert Hume, a Charleston attorney, advertised in the South Carolina Gazette for an overseer “that understands Gardening to live at his Plantation near Charlestown.”

Robert Hume had been born in London and married Sophia Wiggington (1702-1774) in 1721, at St. Phillip's Church in Charleston. In 1726, Hume had bought 174 acres of Magnolia Umbra, north of "Exmouth lying East of the Broad Path," to which he added 110 acres; and the property became his residence and country seat. Robert died just a year after looking for an independent gardener for his property in Goose Creek Parish.

In Philadelphia in 1758, a gentry garden fancier placed an ad in the Pennsylvania Gazette. "Wanted for a Gentleman's Seat in the Country, a Person who understands Gardening." The gardener would have to be well recommended and would work on a yearly basis.

In the same newspaper in 1760, John Mifflin, a Pennsylvania plantation owner, was searching for a man "with a small Family who understands Gardening and Plantation Work."

During this period notices appeared in the South Carolina Gazette searching for gardeners. On March 16, 1765, “A GARDENER, who understands laying out and executing work in the- present taste, and skilful in a Kitchen-Garden” could hear of a good place by applying to the printer of the Gazette.

In April 1765, professional gardener & marketman Christopher Gadsden advertised for an assistant in the local newspaper, “Person that understands the managing of a garden and orchard (particularly a kitchen garden) and is willing to tend the markets constantly,” and in that June, he continued to search for a gardener “that understands the management of a garden, orchard, marketing” was would be offered “employment on a pleasant place within two miles of Charles-Town.”

John McPherson of Mount Pleasant in Pennsylvania, advertised for a gardener in 1766. McPherson was looking for a single man of "proper Resolution, Discretion, and Humanity, to command several other Servants under him."

Several gardeners worked at four shillings per day in the mid 1700s in the Annapolis & Eastern Shore gardens of Edward Lloyd IV. One of these gardeners (with a highly improbable name), James Lilleycrap, worked as a contract gardener at the Lloyds’ Annapolis garden on a daily basis during 1778 & 1779. In February 1780, he contracted to work for a full year at 300 pounds.

Apparently Lilleycrap was a trained gardener hired to undertake major garden redesign & installation. He probably employed others to assist him & paid them out of the 300 pounds. Lilleycrap’s arrangement illustrates just one of the new approaches to pleasure gardening in Maryland after the Revolution.

In 1772, another Pennsylvania gentleman, who knew what he wanted, advertised for "A Gardiner, Who understands his Business very well, and no other need apply." A similar ad appeared in 1773, appealing for " Single Man...willing to work on a Plantation (principally in a Garden)."

Robert Kennedy in Philadelphia, placed an extremely specific ad in 1775. "Wanted, On a pleasant well situated Farm, not many miles fro this city, A Middle aged Man and his Wife, the man to understand gardening and plantation work, the woman to be compleat at dairy business and house work." In the same year, another gentleman was searching for a "Gardener and his Wife, To take Care of a Gentleman's Country Seat, about four Miles from the City." 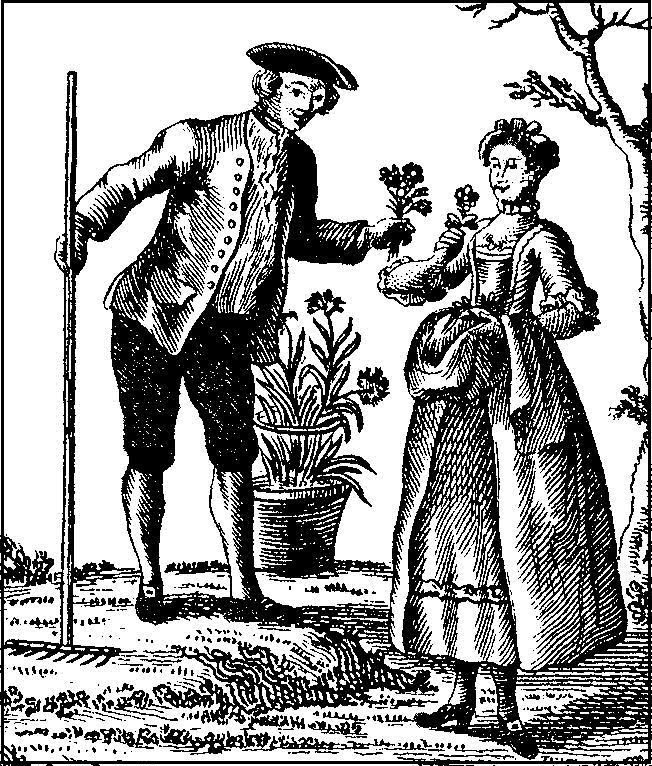 Apparently, the position with Robert Kennedy did not work out, for the Pennsylvania Gazette contained an ad in 1776, from a gardener and his spouse seeking a place for a "Gardener or Overseer of a Farm, a Person who can be well recommended; he has a Wife, who can cook and manage a Dariy."

When independent white gardeners started proliferating after the Revolution, they hired out by the day, month, or year. Visiting English agriculturalist Richard Parkinson reported that he hired a white man in Baltimore in 1799, to mow at “a dollar a day, with meat & a pint of whisky.”

He also recorded the costs of labor of various agricultural & gardening tasks at different seasons of the year around 1800 near Baltimore. In Baltimore, the town market supplied the produce needs of most of the citizens. Richardson recorded that for this market stall work, “Bartering in town costs one dollar & a half per day; at harvest-work, one dollar per day & a pint of whiskey.”

After the Revolution, gentlemen seldom sent to England for their gardeners but began to place advertisements for professional gardeners in local newspapers. Just north of Baltimore, Harry Dorsey Gough advertised in 1788, “I want to employ a complete gardener at Perry Hall…to undertake the management of a spacious, elegant Garden & Orchard.” A similar Baltimore notice in 1795, pleaded for a gardener who was specifically adept at managing strictly ornamental flower gardens.

In Richmond, Virginia, Adam Hunter placed a notice in the local paper searching for a “Complete Gardener, with or without a family (the latter would be preferred)” for his land near Fredericksburg in Stafford County. 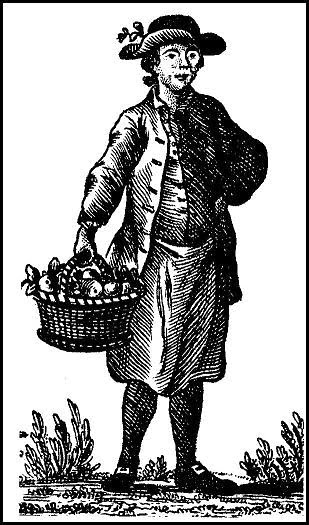 After the Revolution, white gardeners working in port towns such as Philadelphia, Annapolis, & Baltimore, were as likely to be European as they were to be British. Europeans were favored by some hiring gentry in the postwar years. One gentleman searching for a gardener in Baltimore in the 1790s wrote, “A Dutch or Frenchman speaking English would be preferred.”

In 1782, Robert Monckton Malcolm of Monckton Park, between Neshaminy Ferry and Bristol, on the river, placed an ad in the Pennsylvania Gazette, "Wanted to Hire, Two German young or middle aged single Men, who understand farming, clearing and fencing of land; it will be necessary that one of them understands gardening."

In Prince George's County, Maryland, Rosalie Stier Calvert sought help planning her garden and grounds, and employed Philadelphia artist William Russell Birch in 1805, to draw up a landscape plan for Riversdale. She wrote that he was “busy making plans for the grounds of the house. I think he is very good at it and he is doing them with an eye to economy.”

Her father wasn't so sure she should take Birch's recommendations without a second opinion--his-- and wrote back, “glad to learn that you are using the architect Birch. You must not concern yourself about the cost of the plans. Copy them and send them to me. I’ll give you my observations.”

Occasionally foreign-born gardeners speaking little or no English contracted to work in gardens in the new republic confused their hopeful employers. In October 1816, Rosalie Calvert wrote her sister, “We have a German who seems to be knowledgeable and this greatly relieves me. One small inconvenience, however, is that he doesn’t understand a single word of English.”

By March 1819, the frustrated Rosalie wrote her father, “I recently discharged my German gardener...He knew nothing at all and couldn’t tell a carrot from a turnip.”.
at 4:00 AM