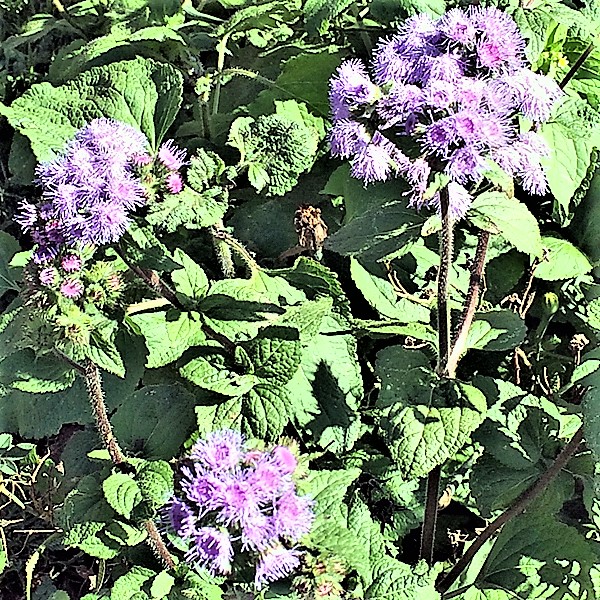 Peggy Cornett, who is Curator of Plants at Thomas Jefferson's Monticello in Virginia, tells us that -

Floss Flower was discovered in Central America by William Houston (c. 1695-1733), a Scottish botanist, plant collector, & ship’s surgeon. Houston sent seeds to England in the early 18th century & British author Philip Miller referenced the species in a 1768 edition of his Gardener’s Dictionary. It was first documented in American gardens in 1836. This self-seeding species forms a spreading, loose-growing plant. The pale blue, & occasionally white, tassel-like flowers bloom from midsummer until the first autumn frost.

William Houstoun (occasionally spelt Houston) (1695?–1733) was a Scottish surgeon & botanist who collected plants in the West Indies, Mexico and South America.  Houstoun was born in Houston, Renfrewshire. He began a degree course in medicine at St Andrew's University but interrupted his studies to visit the West Indies, returning circa 1727. On 6 October 1727, he entered the University of Leyden to continue his studies under Boerhaave, graduating M.D. in 1729. It was during his time at Leyden that Houstoun became interested in the medicinal properties of plants. After returning to England that year, he soon sailed for the Caribbean & the Americas employed as a ship's surgeon for the South Sea Company. He collected plants in Jamaica, Cuba, Venezuela, & Vera Cruz, despatching seeds & plants to Philip Miller, head gardener at the Chelsea Physic Garden in London. Notable among these plants was Dorstenia contrayerva, a reputed cure for snake-bite, & Buddleja americana, the latter named by Linnaeus, at Houstoun's request, for the English cleric & botanist Adam Buddle, although Buddle could have known nothing of the plant as he had died in 1715. Houstoun published accounts of his studies in Catalogus plantarum horti regii Parisiensis.

When Houstoun returned to London in 1731, he was introduced to Sir Hans Sloane by Miller. Sloane commissioned him to undertake a three-year expedition, financed by the trustees for the Province of Georgia 'for improving botany & agriculture in Georgia', & to help stock the Trustee's Garden planned for Savannah. Houstoun initially sailed to the Madeira Islands to gather grape plantings before continuing his voyage across the Atlantic. However he never completed his mission as he 'died from the heat' on 14 August 1733 soon after arriving in Jamaica; he was buried at Kingston. Houstoun was elected a Fellow of the Royal Society in January 1733.

Houstoun's writings & plant specimens, preserved in the botanical department of the British Museum, passed from Miller to Sir Joseph Banks, by whom the manuscripts were published as Reliquiae Houstounianae in 1781.

For more information & the possible availability for purchase
Contact The Tho Jefferson Center for Historic Plants or The Shop at Monticello
Posted by Barbara Wells Sarudy at 4:00 AM