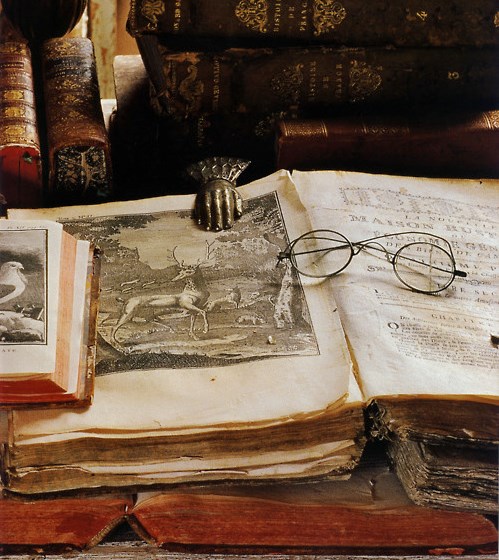 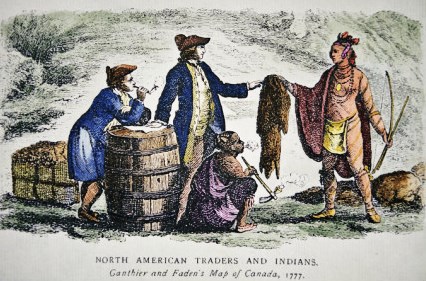 Native Americans Trading Furs 1777.  John Askin 1739-1815 (or Erskine), fur trader, merchant, office holder, & militia officer; b. 1739 in Aughnacloy (Northern Ireland), son of James Askin, a shopkeeper, and Alice Rea (Rae); d. 1815 in Sandwich (Windsor), Upper Canada.  According to family tradition, the Askins were related to John Erskine, 23rd Earl of Mar, whose unsuccessful revolt in 1715 forced some of the family to move to Ireland from Scotland. John Askin came to North America in 1758, & was a sutler with the British army at Albany, N.Y. Following the capitulation of New France he entered the western fur trade.

Some time in the mid 1760s Askin had moved to Michilimackinac (Mackinaw City, Michigan). He ran a trading store in the settlement, was commissary for the garrison, & farmed.  In 1780, a conflict with Patrick Sinclair, who had recently arrived to take charge at Michilimackinac, may have been instrumental in Askin’s decision to move to Detroit, Michigan). 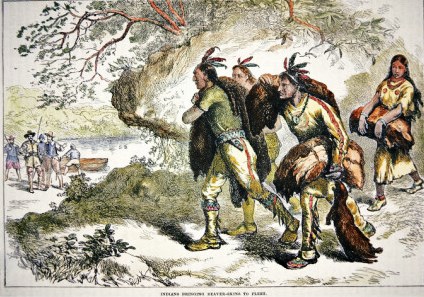 Colonial Fur Traders.  The animal population was declining & the Indians were in a state of more or less open warfare with the Americans. Fur exports from Detroit continued to drop – from 5,000 packs in 1784 to 1,900 in 1796.  In 1788, the British had opened the Great Lakes to private vessels, & Askin took the opportunity to go into the shipping business; & from 1791 to 1795, another chance of sales to the government presented itself – the furnishing of supplies to the Indians who had gathered on the Miamis (Maumee) River to make a last stand against the Americans.

Much of Askin’s hope for prosperity seems to have been pinned on his land speculations.  By 1794, the British government had agreed to evacuate the posts south of the Great Lakes that it had retained – after the 1783 treaty with the United States, & many British residents of Detroit tried to accumulate land holdings from the Indians before the transfer to American authority occurred. Over the years Askin succeeded in accumulating numerous properties in Upper Canada, which was to become his home after 1802. 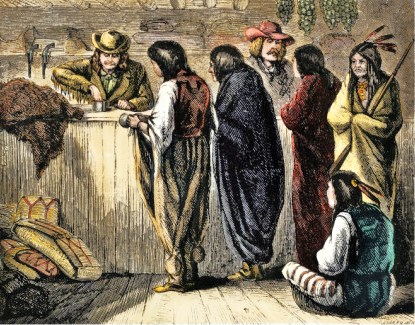 Native Americans Bartering Furs for Goods at Trading Post 1800
Although Askin’s first 3 children, John, Catherine, & Madelaine, were probably born to the Indian slave Manette (Monette) whom he freed in 1766, he made no distinction between them & the 9 children of his marriage to Marie-Archange Barthe at Detroit on 21 June 1772.  His kindness extended beyond his own family. In a letter of 1778 from Michilimackinac to trader Charles Paterson he rebuked Paterson for allowing a child “that every body but yourself says is yours” to be sold to the Ottawas. Askin had retrieved the child & he informed Paterson, “He’s at your service if you want him, if not I shall take good care of him untill he is able to earn his Bread without Assistance.”

From the American Revolution to 1796, Detroit was under military government, with little civil jurisdiction. In 1789 Askin became a justice of the peace there.  In the spring of 1802 Askin moved to Sandwich, Canada. He seems to have lived in considerable comfort. An inventory of his estate in 1787 listed among other things carriages, silver plate, mahogany furniture, & a well-stocked library.

Askin's library, one of the first known collections in Michigan, is documented in annual inventories of his estate dated 1776, 1777, 1778, 1779, 1787, & ~1808, plus an 1821 inventory of Askin's estate titled "Inventory of Property Real &Personal Belonging to the Estate of the Late John &Archange Askin, Sandwich." Each of these contains a section headed "Writing Implements, Books, & etc." - these list the books by author and/or short title & an assigned monetary value. Askin's library is examined fully in Agnes Haigh Widder, "The John Askin family library: a fur-trading family's books." Michigan Historical Review 33:1 (Spring 2007), pp. 27-57.

Title: A complete body of planting and gardening Containing the natural history, culture, and management of deciduous and evergreen forest-trees; ... Also instructions for laying-out and disposing of pleasure and flower-gardens; ... To which is added, the manner of planting and cultivating fruit-gardens and orchards. The whole forming a complete history of timber-trees...
Author: William Hanbury

Title: A compleat body of husbandry Containing, rules for performing, in the most profitable manner, the whole business of the farmer and country gentleman. ... Compiled from the original papers of the late Thomas Hale, ... In four volumes
Author: Thomas Hale